Implementing uniforms may prove beneficial in the long run 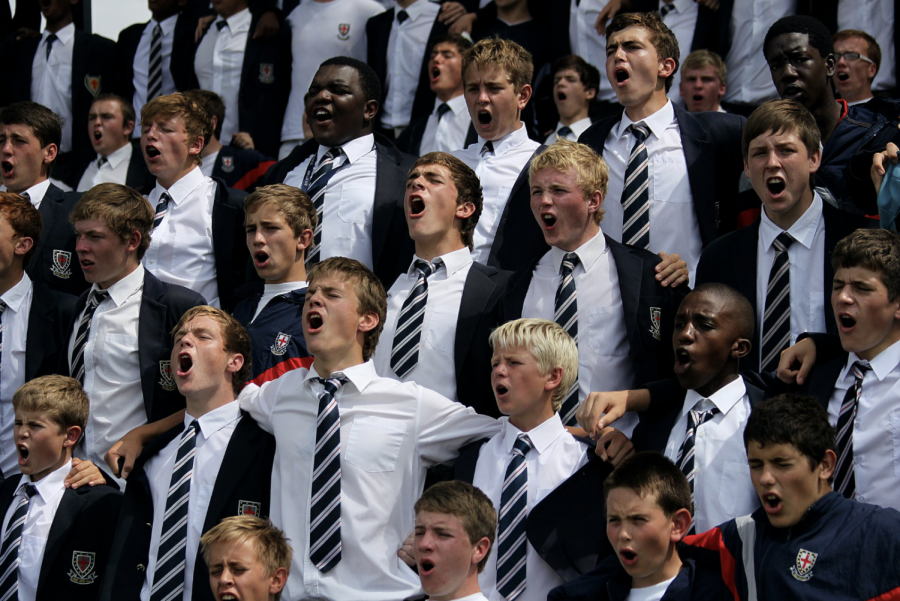 Spirit rages as classmates cheer together in their coordinated uniforms, helping to boost school unity.

Currently, in the US, approximately one in five public schools requires its students to wear uniforms, according to the National Center of Education Statistics. Starting off as a mainly private and parochial school concept, uniforms have become widely accepted as an educational norm. Even as fashion continues to play a large role in everyday culture, when it comes to academically devoting a few hours of your day, there isn’t a large necessity for expressing individuality through trendy outfits.

In today’s growing climate of individuality, diversity, and acceptance, more and more people are becoming aware that everyone has the right to express themselves. Vocally, religiously, or even politically, the ideas of self-expression are spreading throughout the world. While this is an amazing step for all, many people struggle to find the difference between a right and a privilege. Following your values and morals is a right that should never be taken away nor abused. It is difficult for us, as a society, to pinpoint exact situations in which people are spinning the definition of a value to their advantage. For a school environment, wearing clothing of choice is a privilege, not a necessity.

With a uniform, students can still keep their rights while also being respectful to the academic setting. Uniforms are not restricting students in any harmful way but actually providing an even playing ground so that everyone’s top priority can be receiving the best education possible, without any nonessential distractions. Excluding clothing that is motivated by religion or personal beliefs, all schools should implement some form of a uniform because of the numerous benefits it holds.

As the name suggests, uniforms provide uniformity amongst all students.

With uniformity comes less judgment over familial status and wealth. Some students no longer have to feel the pressure of having to fit a certain image in order to feel accepted at school, nor are they at a high risk for bullying, exclusion, and other negative behaviors from their peers due to their different attire. Uniforms provide a safe environment for students who do not have the privilege of buying clothing for the latest trend.

Uniforms put all students on the same playing field, increasing each student’s feeling of belonging as they realize their clothing does not give them a better social position. A study done by the UK suggests that 66% of parents believe uniforms will help their children mentally (UK Study).

Uniformity also allows students to focus on their education rather than their physical appearance. By enforcing a uniform, students no longer spend the extra time deciding what they want to wear and how their peers will react to it, giving students extra time to focus on their work. Additionally, by taking their focus away from their attire and their peers’ thoughts, uniforms help students concentrate on their classwork (NASSP Bulletin). Again relating to pressure, students no longer will feel the stress of fitting in physically, helping them pay more attention to their courses.

In a Texas survey of approximately one thousand middle schools, it was found that students in uniforms “reported significantly more positive perceptions of belonging in their school community than reported by students in the standard dress group” (David L. Brunsma). Uniforms bring classmates and school faculty together by creating a sense of equality. This equality branches out into respect and compassion since every member of a school feels a part of a team, their physical coordination making the team stronger than ever before. By providing harmony and unity, school uniforms bring an extra level of spirit and pride to the classroom.

Speaking of the classroom, uniforms can help students’ perceptions in school. By providing a ‘blank canvas’ appearance to teachers, students can form stronger relationships with their teachers since their uniforms reveal a “higher academic potential” and “better behavior” (Dorothy Behling). Without judgment by their exterior, students have a higher chance of making faster academic bonds since teachers and peers are not making negative assumptions based on their appearance, which can help in a learning setting or even in the college process.

On the topic of perception, uniforms introduce students to professionalism, starting in a classroom setting. As parents and teachers around them dress in clothing to reflect the standards of their jobs, students learn that in order to be taken seriously, a certain degree of professionalism is necessary. By wearing a uniform, students will learn earlier the importance of a specific appearance in an academic environment, which will one day help them transition into adulthood.

Uniforms are not a way to enhance a dress code. Targeting female and male students equally, uniforms strengthen unity, integrity, and responsibility in a school, instead of calling out students for wearing specific clothing that has been deemed “unacceptable” by the school, a calling out that mainly attacks girls for wearing clothes that make them confident. Instead, uniforms give every student a blank slate, without the added drama of a dress code that only works to subjectively pinpoint a single person as ‘inappropriately dressed.’

One problem people often have with uniforms is the idea that there are only a few options, only catering to a few. The best way to solve this problem is by creating a uniform that is flexible to all body types and identifications. As hard as it may seem, with thoughtful planning and creative ideas, the right amount of patience can allow for a variety of uniform options that every student can feel confident wearing. Additionally, students can spice up their uniforms with individuality by accessorizing with jewelry and hairstyles. Even with a school-mandated uniform, including shoes, students can still have the opportunity to bring their unique flair to their outfits.

In the end, individuality is great to a certain extent, but it should not be a priority placed higher than a good education. From recent school events of a Tiktok prank gone wrong or the need to take the doors off of boys’ bathrooms, uniforms may help push for better behavior since uniforms can help bolster students’ focus, integrity, and respect. Additionally, uniforms should be highly considered due to their benefits in and outside the classroom, helping shape students into respectful, kind adults that the world needs now more than ever before.