Budget proposal meeting breaks down the terms of the plan

At the Westford School Committee’s most recent meeting on December 11, 2019, almost 100 Westford residents gathered at the Millennium School to attend Superintendent Bill Olsen and Assistant Superintendent Kerry Clery’s presentation regarding recent school budget cut proposals. In short, Olsen has come up with a preliminary plan to remove programs and layoff approximately twenty teachers, “without compromising Westford’s top school system rating and the outstanding community of Westford,” according to Olsen.

Specifically, the budget cuts involve classroom teachers, programs, activities, spending, and increases in student fees. This is still an initial proposal on how to handle the budget cuts, one that will be finalized during the school committee meetings leading up to the town meeting in March 2020.

Firstly, if the plans become permanent, at a district level, the system of school leadership will change. The elementary assistant principals will take on, along with their current role, the task of becoming a student support teacher. Westford’s assistant principals will be taught methods to combat the emotional health issues students may face throughout their careers in the school system. 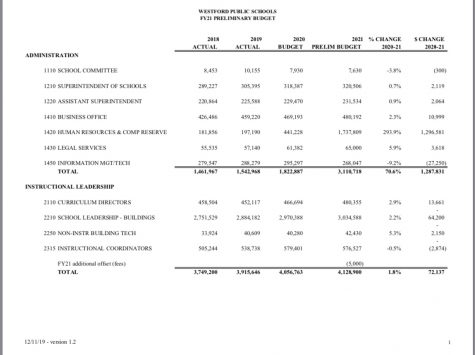 Next, classroom teachers will be impacted by the cuts. The proposal highlights the teachers who will be laid off for the school year 20-21, such as core subjects, world language, and physical education teachers, among which are six classroom teachers at the elementary level. Although this will cause a decrease of about twenty of Westford’s educators, Olsen acknowledges their value to the Westford district and will consider them for future open positions throughout the school system.

Aside from specific teachers, the Latin program is outlined in the proposal for termination. The program will be phased out of Westford Public Schools due to the budget concerns in the town.

“You know, I was at the meeting for a very long time. I felt that the people talking effectively covered the material that students and parents wanted to know. However, that being said, we discussed a lot about the budget, and I think we all knew it was the town who was not allocating enough for the schools. I understand that their hands are tied in this situation, however, and I think I speak for a lot of people, that some decisions could be reworked, such as Latin, a language that has made many students love the school system,” Sophomore Alpana Bakshi said.

The decision was made due to a decline in interest in the Latin program. Olsen and Clery found that the sixth graders, after taking their FLEX orientation, lean toward Spanish as their primary language of interest.

As a result, Olsen and Clery have proposed to the School Committee to phase the Latin program out of Westford Academy, ending the subject on the high school level for the class of 2024. The current seventh graders will choose a new language of study for their eighth grade and high school careers.

“Because the Stony Brook enrollment has decreased over the past couple of years, they no longer require five foreign language teachers but four. One might think that if there are two Spanish teachers, why not reduce that number to one, but we had to look at the data to determine which language was the most appropriate to cut based on student enrollment,” Clery said.

As another measure, the proposal is set to increase the school system’s income due to the increase in fees that students would have to pay for their activities and transportation.

On the subject of increases in fees, Olsen shared that the plans for later start times have not yet been affected by the budget cuts. However, bus passes will increase from $275, with a $750 family cap, to $325, with an $850 cap.

One factor that raised budget concerns in the district is the decreased enrollment rate expected in the next five years. According to Olsen, this is the largest change in enrollment since the 1980s.

With Westford birth rates declining and more people moving in, the town needs to supply safety for an increasing amount of people in the town. Therefore the money is going to the police force and firefighters, which is one reason for the decrease in the school budget.

With fewer students, Olsen expressed that the schools can combat the decline with fewer teachers, helping the budget overall. Olsen and Clery voiced that the standard of education Westford offers will not be compromised as a result of their proposal.

A final aspect that raised the distribution of the budget is the need to fund special education. According to Olsen and Clery, the need for student therapists and aids has increased over the past decade, resulting in more of the budget being allocated to provide these students with the facilitation they need.

Throughout the meeting, members of the audience expressed their opposition or approval to the decision; many clapped when they agreed with a school committee member who proposed alternative strategies to combat the budget cuts. However, the public was not permitted to voice its opinions during the meeting. Particularly, Senior Shivangi Ranjan came to the meeting to voice her concerns with the budget, disappointed that reality did not meet her expectations.

“Personally, I thought that people on the school committee must have known that there were a lot of people who wanted to specifically ask questions because they have a lot of concerns. The fact that the meeting went on for about four hours and there were people in the audience watching for that amount of time is really disheartening,” Ranjan said.

Aside from students, many teachers and parents attended the meeting to advocate for the education of the students. Resident Todd Shestock put Olsen, Clery, and the school committee on the spot with his comments at the end of the meeting.

“Isn’t anyone in this room going to go to the town and try to ask for more money? Everybody on this board should fight the town for the kids in this town… Fight for the kids,” Shestock said.

At the end of the meeting, Olsen stated that the proposal’s goal is to ensure that Westford Public Schools retains its high educational status while adhering to the town’s school budget.

Westford resident and history teacher Michael Martell was one of many teachers present at the meeting. He believes that Westford needs to come up with a smooth solution that is beneficial to the education of students, rather than detrimental.

Our other budget articles:

Westford Academy faced with a lack of substitute teachers