On Friday nights, crowds of students, parents, and faculty line the Westford Academy Trustees’ Field stands to watch the home football game. While the primary focus of these games is the football team, another team’s presence substantially adds to the experience of the night.

The WA Marching Band (WAMB) brings an unmatchable energy to the field, performing at every home football game, with music throughout the night and a main event at halftime, as well as town events such as the Apple Blossom Parade and Memorial Day. In the same way that football has captains, WAMB is led by its three drum majors, seniors Nikita Ang and Kathir Meyyappan as well as sophomore Jefferey Laflamme.

“The community that’s built around the marching band here at WA is one of the most tightly knit, passionate groups that I’ve seen at WA. That alone is enough to drive me as a leader in the ensemble,” Meyyappan said. “Everyone loves what they do, and that in itself makes the experience awesome.”

Although the title “drum major” seems to indicate the position is held by drum players, in actuality drum majors have little to do with this percussion instrument. Meyyappan, Ang, and Laflamme are the WAMB club members with the sparkly plumes and capes that conduct their peers, leading WAMB through practices and performances.

“We function as the main student leaders of our leadership team, and we help our band director lead the marching band. Also, in our leadership team are section leaders, who play a big part in organizing and guiding their specific instrument sections on the field,” Ang said. “There are definitely a lot of people working hard to make our group function well and set the tone for a great environment.”

While Meyyappan, Ang, and Laflamme don’t play the drums, they each play an instrument in band director Adam Shekleton’s symphonics class: Meyyappan the tenor saxophone, Ang the flute and piccolo, and Laflamme the tuba and the trombone.

To obtain their positions, the trio individually auditioned in front of last year’s band director Michael Soo. The process involved showing off their conducting skills and block parade commands. According to Ang, drum majors are selected based on their prior demonstrations of leadership and character.

This year is Ang’s second as a drum major and fifth as part of WAMB. For Meyyappan and Laflamme, it is their first as drum majors and third as members of the club.

Once drum majors are selected, they must participate in the DMA (Drum Major Academy) at the University of Massachusetts at Amherst. For this past summer, this requirement was abridged to an online format, but Meyyappan, Ang, and Laflamme still met up regularly to practice conducting, including whistle commands and other useful skills.

“Being a drum major is not for everyone and there is a lot of responsibility and work coming with the role but I think our current team carries it very well,” Ang said. “In our summer meetings, we focused on really developing our skills and leadership abilities to best prepare ourselves for this year.”

On the topic of summer preparation, the WA Band holds a week-long camp at the end of every summer. During this camp, WAMB familiarizes new members with technique, posture, and commands.

“Band camp is extremely helpful in introducing us to new members and fine-tuning our skills before the start of our season,” Ang said. 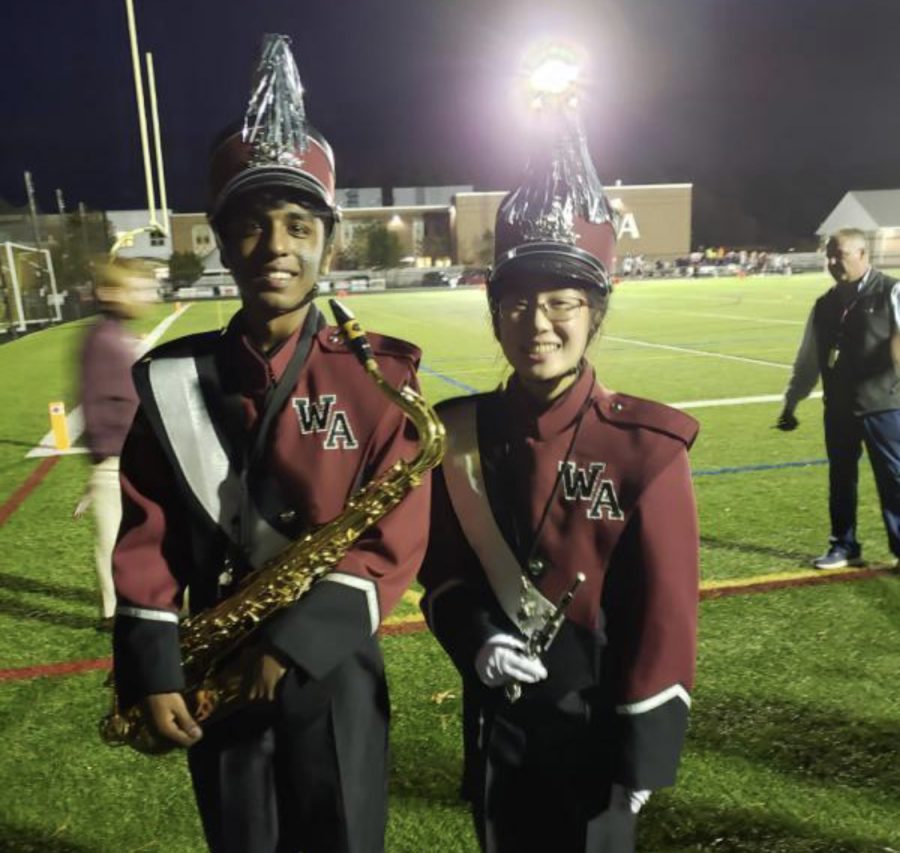 Gallery|6 Photos
Provided by Nikita Ang
Senior drum majors (left to right) Kathir Meyyappan and Nikita Ang stand together with their instruments at a home game.

As for the actual season, practices take place Monday evenings from 5:30 p.m. to 8:30 p.m. and Friday afternoons when the football team has a home game from 3:30 p.m. till the performance. During practices, the drum majors will work with section leads to perfect each instrumental unit’s marching formation. The trio will also run through conducting the music to make sure that the group is in harmony with one another.

“The days are long but it’s always a great time and everyone is seriously great at keeping the energy high and are always good sports which makes rehearsals quite fun,” Ang said.

With the restrictions brought onto the 2020-21 school year due to the pandemic, WAMB had limited performances last year. On top of that, a transition between band directors took place. Meyyappan feared that these challenges would negatively affect WAMB, but is pleasantly surprised by the WAMB progress so far this year.

“With a new director coming in, and COVID taking its toll, there was even a doubt on if the marching band would be large enough to support a decent show. Nevertheless, Mr. Shekleton came in and perfectly arranged a new field show, music for the ensemble, and a million different logistics to kick off band camp flamboyantly and start us off with success,” Meyyappan said.

Despite not selecting Meyyappan, Ang, and Laflamme himself, Shekleton would not choose anyone else to fill these positions, believing that the team has worked incredibly well together this past season.

“Our three drum majors have done a fantastic job of building community, continuing tradition, and setting the standard for the marching band. Their energy, excitement, and enthusiasm was pervasive from day one of band camp all the way through our final home game last Friday [Nov. 12],” Shekleton said. “I [am continuously] impressed by the professionalism and accountability of these leaders, and I am very excited to see where we head in the future based on their leadership.”

As for her decision to become a drum major, Ang felt like it was a natural step for her to take, as she wanted to give back to her band community in the same way that past seniors had. She is amazed by her growth over the past four years, acknowledging a positive change in her communication and collaboration skills.

“I have enjoyed every minute on this team. The entire club is basically like a gathering of friends who want to have fun together,” Ang said.

Meyyappan feels the same way, citing some of the most memorable experiences on the team as the ones where everyone was laughing and connecting with one another.

“[A particular favorite memory of mine is] the time that we got to watch an episode of Spongebob Squarepants (“Band Geeks”) on the big projector. I won’t forget the way that everyone kept drawing parallels between fish on the screen to members of our own band,” Meyyappan said.

As the youngest of the drum majors, Laflamme feels a sense of pressure to measure up to Meyyappan and Ang. However, the support and encouragement he receives from them and Shekleton makes him feel comfortable in his leadership role.

“Nikita was able to do the same thing [last] year with skill and authority so it nullifies some of the stress [of being an underclassman drum major],” Laflamme said.

WAMB’s next big performance is at the Thanksgiving Day football game. At the beginning of the WAMB season, the drum majors shared a goal of making this season enjoyable and more collaborative than ever before. Reflecting on this season so far, the drum majors feel that they’ve met their goal, as the WAMB group connection has grown stronger.

“Getting better is important for sure, but under the guidance we have right now, as long as we enjoy what we’re doing, we’ll definitely get better,” Meyyappan said.

Laflamme wants students to know that WAMB is a great opportunity to form long-lasting connections with peers and the WA community. Although WAMB requires a great deal of commitment and hard work, the benefits are unmatchable, according to the club’s drum majors, as students gain an outlet to express themselves, surrounded by kind, supportive friends.

“Marching band is a fairly large commitment, I won’t hide that, but it is one-hundred percent worth the relationships you gain and the people you’ll meet,” Laflamme said. “I have never met anyone in marching band who hasn’t been energetic, welcoming and overall just a good person. It is a great place to master your current instrument or learn a new one.”