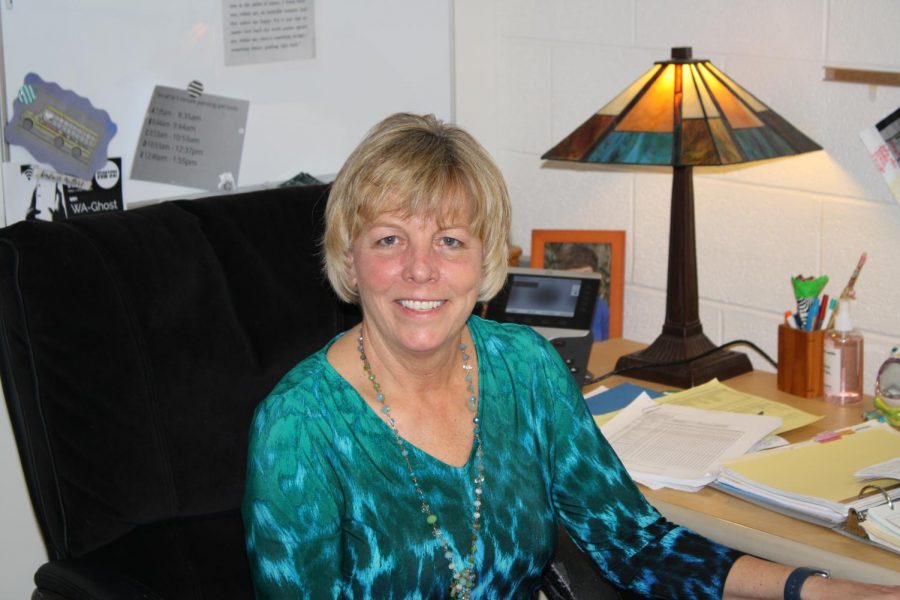 Wendy Pechacek retires from WA in June of 2021 after 21 years.

Pechacek retires with grace after 21 years

For many students and teachers, Wendy Pechacek is a familiar face, whether she’s been a guidance counselor or a person to go to for advice, she has been a pillar of WA’s staff for twenty-one years of leadership. Pechacek, WPS’s 6-12 Coordinator of School Counseling, will be concluding her career at the end of this 2020-2021 school year.

Her career started as the Director of Career Development at Rivier University. Following that, she worked at a program in Middlesex Community College known as Crossroads, a gap year program that helped students through career assessments, career counseling, and service learning. During her time at Middlesex, Pechachek acquired her certification to teach English as well, which assisted in her path to a job at Westford Academy in 2000.

Pechacek worked as a Guidance Counselor for her first twelve years at WA and as a 6-12 coordinator for the following nine years. Throughout this time she has developed lifelong bonds with her co-workers, who she now regards as family.

“My absolute favorite thing is to spend twelve minutes eating lunch with my department because we laugh every single day. I love them all,” Pechacek said.

One of the first things Pechachek did at WA was increasing the number of coordinators from one to two in every major program in the counseling department, in order to emphasize collaboration and grow support for one another.

“I’m looking at my department and thought what if there were two people that did each of these things, then there’s always a backup. If they have a student in crisis, it will be easier to function. If they’re just individually working on it, it won’t screech to a halt until they can do it again,” Pechacek said.

For Pechacek, student mental health has always been a priority. She has worked with Principal James Antonelli to further her outreach. Through her creation of the Bridge Program, Challenge Success, the Guidance Peer Support Program, and mental health screenings, Pechachek has encouraged putting aside the stresses of academics to focus on mental health.

“We had a lot of students that were hospitalized for mental health reasons, and the number was growing every month. I was so worried about how to take care of our kids. So I started doing research and worked with Mr. Antonelli to get some funding for the Bridge Program, which supported students when they returned from hospitalization. The number of kids who have been hospitalized has decreased,” Pechacek said.

For the duration of Pechacek’s career, Principal James Antonelli has worked closely alongside her to develop the guidance department.

“Mrs. Pechacek is one of the smartest people I know, and she has a tremendous work ethic.  She has helped guide thousands of students throughout her career and she will be sorely missed at Westford Academy,” he said.

Despite Pechacek’s passion for furthering resources for student mental health, her goals have not always been easy to achieve due to the approval process involving the many layers of Administration.

“No matter what I’m doing, I’m always thinking about how could this be better. Things don’t always go as quickly as I want them to go as far as those changes [steps towards betterment in new projects] are concerned, and so I do get frustrated sometimes, you know, ‘why is taking so long, it’s so obvious that this is a good thing, why don’t why can’t we just do it’,” Pechacek said.

Pechacek will be leaving WPS to spend her retirement time in Cape Cod, volunteering some of her time for the Massachusetts School Mental Health Consortium.

She leaves WA in high spirits, having an appreciation for her time at WA and the people she has met along the way.

“I’m proud that I have made my mark here, but every time that somebody talked to me asking, ‘well if you didn’t have a caseload of students wouldn’t that make your life easier?’, my biggest accomplishment is my relationship with the students. I’ve worked with hundreds of students and I love them all, and hopefully, when they were with me they felt like they were the most important person,” Pechacek said.