In Between The Lines: A cartoon horse teaches what it means to be a good person

In Between the Lines is a column dedicated to television and book analyses, and explores why media is important and how it teaches us about life. 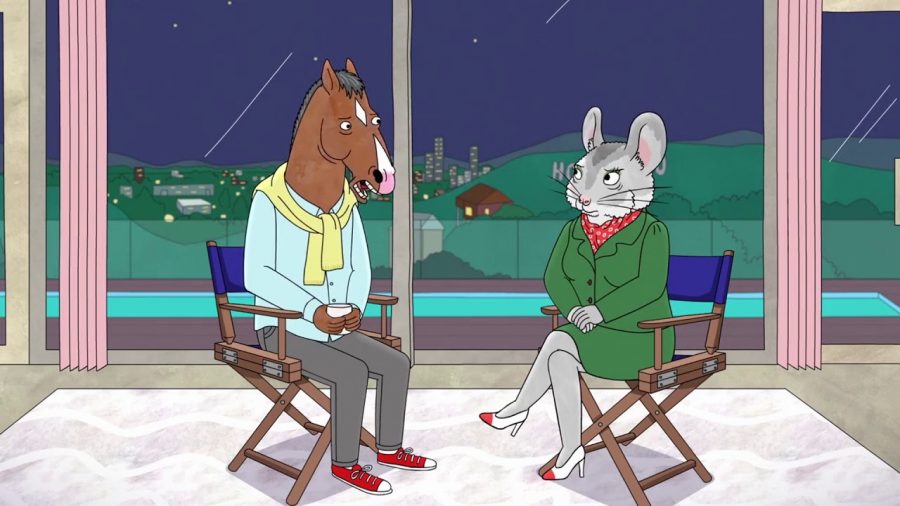 It’s hard for me to describe the effect of what a cartoon horse has taught me about mental illness, empathy, and being a good person.

BoJack Horseman is an animated Netflix original show that explores a plethora of prevalent issue, such as intergenerational trauma, depression, drug and alcohol addiction, and intrusive thoughts, in the rawest approach I’ve ever seen in the media.

The show can effectively switch moods in a matter of seconds, from making the viewer laugh at the absurdity of a silly joke to reflecting on what the meaning of life is. The show presents itself as a mindless cartoon show, with its anthropomorphic animal characters, colorful child-like animation, ridiculous puns, and antics. This is exactly why the show works. It creates a juxtaposition between its absurdity and seriousness that allows the show to explore complex and saddening topics without ever becoming too dark or hard to watch. It also makes BoJack Horseman, an anthropomorphic horse who is the main character, more palatable to the viewer.

BoJack was once the star of a popular 90s family sitcom, “Horsin’ Around”, and eighteen years later he went to build a better reputation other than being a “has been” sitcom star. Through the six seasons of BoJack Horseman, we see him attempting to build up a legacy for himself, publishing a memoir, starring as his childhood hero in a biographical movie, and acting in a critically acclaimed television show– but none of these things ever make him truly happy.

Throughout the show, we see BoJack do things that are unredeemable, but because these acts occur over the course of six seasons, the viewer doesn’t acknowledge the amount and degree of his decisions, until season 6, episode 12, Xerox of a Xerox. BoJack is interviewed by Biscuits Braxby, a television journalist, Biscuits lists off many of BoJack’s past mistakes, and the viewer is forced to remember BoJack and his recurring, self-sabotaging, habits.

He constantly belittles his friend Todd Chavez and ruins their friendship, he almost sleeps with a 17 year-old girl, he strangles his co-star and ex-girlfriend Gina Cazado in a drug-fueled rage, he uses the ghostwriter for his memoir Diane as a therapist to dump all his trauma onto, he lets the creator of “Horsin’ Around”, the only reason for his success, get fired, the list goes on and on. BoJack exhibits this pattern of self-destruction throughout the entirety of the show. Not only do these actions affect his life but they have lasting, negative effects on the people around him.

However his most selfish act by far is going on a drug and alcohol bender with his co-star from “Horsin’ Around”, Sarah Lynn. Sarah grew up on the set of “Horsin’ Around” and later became an international pop star. She had a greedy mother, and it was alluded that her step-father was sexually abusing her. She looked up to BoJack as a father figure, but BoJack was a terrible role model and inadvertently gave Sarah vodka when she was five years old, which led to her alcohol and drug abuse. When Sarah hits nine months sober, BoJack invites her on the bender, which ultimately ends in her death.

If I knew someone like BoJack Horseman in real life, I would never want to be associated with them. But time and time again, I find myself rooting for BoJack. Why do we want people who do irredeemable things to be redeemed?

The main reason I think we root for BoJack is because of the extreme empathy that we feel for the character. The creator, Raphael Bob-Waksberg, and the writers of the show do an incredible job writing BoJack and the other characters of the show as multi-dimensional and relatable. We learn about BoJack’s traumatic childhood with two abusive parents who constantly belittle him.

His mother refuses to love him because of her own horrible upbringing. We also learn a bit about his father’s poor and lonely past. We see how trauma and abuse trickle down our family trees. But as Todd says in season 3, “No, BoJack, just stop. You are all the things that are wrong with you. It’s not the alcohol, or the drugs, or any of the sh*tty things that happened to you in your career or when you were a kid. It’s you. All right? It’s you”, BoJack ultimately makes decisions for himself and is the reason for his own demise. He constantly victimizes himself, trying to blame his behavior on his childhood trauma, the viewers see how intergenerational trauma can ruin people’s lives. BoJack needs to take responsibility for his mistakes and learn from them.

As human beings, or in the show’s case, sometimes anthropomorphic animals, we want these characters to become better, not because we particularly care about them, but because we see ourselves in them, and we want to be better.

When BoJack asks Diane in the season one finale “Do you think it’s too late for me? […] I need you to tell me that I’m a good person. And I know that I can be selfish and narcissistic and self-destructive, but underneath all that, deep down, I’m a good person and I need you to tell me that I’m good […]”, we all desperately want Diane to tell BoJack that he is a good person. She doesn’t. It doesn’t matter whether we have good intentions or want to be good people. What matters is how we make others feel. We are sums of our past, and regardless of what awful things have happened to us or what demons we are constantly fighting, all of us have to trudge through life and make the hard, active decision of being a good person. Every. Single. Day.