Football, volleyball, cheerleading, and track to be held this season with modifications

Cheerleading, football, girls’ volleyball, and track will take place, following the MIAA’s consent to hold the season. Adjustments made because of COVID-19 cancel competitions for cheerleading and call for the traditional indoor track season to be held outdoors.

“The decision metrics that I have applied to the decision on the fall-2 floating season are the data on the seven-day averages of mid-January to early-February, team [COVID-19] transmission information from the [Dual County League] winter sports season, and the data that point to no transmission [of COVID-19] within the school system,” Olsen said.

Recent trends exhibit a declining number of COVID-19 cases in the area. From a seven-day average of roughly 3,100 cases in January, the February averages have decreased to just below 2,000 cases.

Along with data from seven-day averages and daily reports, one of the main reasons that Olsen is in favor of a fall-2 season is that there were no reported transmissions of the virus within the DCL during the winter season. With the exception of Acton-Boxborough, which shut down in December due to fear of transmission through holiday traveling, no schools in the DCL closed during the winter season.

Even with no DCL reports of transmission, Olsen still stands by the decision that cancelled ice hockey and basketball for the 2020-21 winter sports season. He justified his stance with the fact that COVID-19 cases in November and December rapidly escalated, with some individual days surpassing 8,000 in reported cases.

“If you disagree with me, it is fine. There simply is no universally right answer to people in this pandemic. Your opinion is as good as mine,” Olsen said. “I do believe that the MIAA has put in place sufficient safety measures to ensure that this fall-2 season can be conducted safely.”

As per the Massachusetts EEA (Executive Office of Energy and Environmental Affairs) ruling, the MIAA classifies football as a high-risk sport and volleyball as a moderate-risk sport. Even with mixed feelings from the Westford COVID-19 Advisory Board on the approval of football and volleyball, Olsen still thinks that WA Athletics’s safety measures will reduce the risks of transmission through these sports. 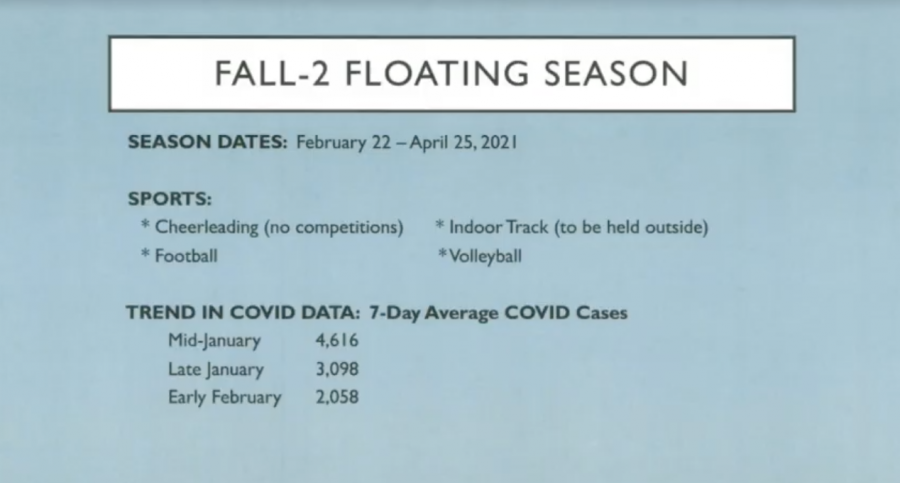 In accordance with MIAA football guidelines, only twenty-five members of the team can practice on each half of the field. WA Athletics is still waiting to hear from the EEA on an increase of players per half-field if all players keep a six-feet distance from one another. According to WA Athletic Director Jeff Bunyon, football will adopt a new protocol to adjust to social-distancing requirements.

“For football, only a certain number of members are allowed on the field at a time. The traditional sideline, which players are all gathered, has been expanded from the ten-yard line on one side to the ten-yard line on the other side. Every two yards, which is six feet, there will be a marker, where each player will stand,” Bunyon said.

WA Athletics plans to conduct an outdoor track season, instead of the traditional indoor season. In addition to following the COVID-19 safety guidelines, the track season will only hold informal meets, due to a lack of facilities.

For cheerleading, the MIAA canceled competitions because stunting requires direct contact between athletes. Moreover, cheerleaders will only attend home games, where, as of right now, they will not be able to perform stunts.

In terms of girls’ volleyball, both teams will remain on their sides of the court. A new ball will be put into play after each point, and there will be periodic sanitization of the net as well as other equipment. Instead of chairs, while on the sidelines, WA Athletics will number the bleachers with six feet between each number. Seating will skip every other row, and the numbers will be placed diagonally between rows. Each player will receive an assigned seating number that will last for the entire season.

Compiling data from the eighteen districts that approved girls’ volleyball for the fall-1 season, WA Athletics will not use the COVID-restriction area, which is a three-feet distance from the net for each team.

“Because of the placement of the referee in a volleyball match, referees had a heightened sense of awareness during the game. Every time a player got into the [COVID-restriction] area, a whistle was blown. The flow of the game completely decreased. It seemed like a great idea on paper. But speaking to [the other teams], the [COVID-restriction area] did not achieve the desired goal. The system did not add any value to the safety,” Bunyon said.

As for starting the season, the athletic department will follow the guidelines of the Massachusetts Health Department. WA requires each athlete to submit a doctor’s note confirming that the student recently tested negative for COVID-19.

WA Athletics is still waiting for the EEA’s recommendation on spectators. For now, Bunyon is prepared to follow the same lanyard system as executed in the fall-1 season, in which spectators, mainly students’ families, can only enter games with school-issued lanyards.

Bunyon is fully confident that the risk of transmission to coaches is low. Wearing masks at all times, coaches are further protected by their ability to stand six feet away from their players, while still successfully training their teams.

III. Addressing Concerns about the Safety of the Fall-2 Season

In support of Olsen’s proposal, WA Principal James Antonelli does not predict a school shut down because of the sports season.

Feeling as though a student contract would hold students accountable for their actions outside of school and sports, everyone at the meeting expressed interest in school committee member Chris Sanders’s proposal of a student contract.

“I think we can safely play sports with a mask. The numbers involving two people wearing good masks giving each other the virus are so low that, even with closer contact, our problem is not two people wearing masks and infecting each other. Our problem is that our students are socializing outside of school without masks. Part of me does not want to give sports to those students, but I am inclined to allow it with a student contract. Students need to commit to being safe,” Sanders said.

Additionally, multiple school committee members, including Sean Kelly, Alicia Mallon, and Mingquan Zheng, think that returning to normalcy, at this point, is important, expressing that it is time to explore ways of safely bringing students back to in-person activities. According to Mallon, the decision to approve the floating season will not negatively affect other areas, such as academics, that the district is working to improve on.

“We hear a lot about how we need to reopen our schools. Our schools aren’t closed. We are just in hybrid,” Mallon said. “We are just thinking about increasing students’ time of learning. I think we can do both, increasing the time of learning and starting the sports season, at the same time, especially since we are approaching the phase in which our staff will be getting vaccinated. We need to talk about reopening in all places.”

However, not all members of the discussion were in full support of the floating season. Adam believes that a fall-2 sports season would interfere with WPS’s attempt to improve academics during the pandemic. Adam wants all teachers vaccinated and comfortable with the idea of in-person extracurricular activities before WA holds sports seasons.

“I am struggling with this decision. To benefit a small portion of students, sports put a large number of students and staff at risk,” Adam said.

At the end of the meeting, the committee deferred a motion to vote on a student contract; they felt that more thought needed to go into the contract before a vote is held.

“Given the difficulties of the last sports decision, the superintendent and I did decide that we will not be taking public comment. Last time, we tried to [take public comments] to be fair to everyone, but it became a very emotional evening,” Miller said. “[We hope] this season is safe, and we give our best to all student-athletes.”