In light of COVID-19, the WPS School Committee and Finance Department authorized a change to Westford Academy’s 2020-2021 student parking system: student parking will now be open to both juniors and seniors, and parking passes will now cost $200 per year.

On September 2, Dean Bob Ware announced this new policy to the students.

“Parking passes are available to purchase throughout the entire school year and will cost $100 each semester,” Ware stated in his email.

While the new policy was announced recently, School Committee Chairman Gloria Miller details that this decision was in the works since the end of January, due to complications in the FY21 budget. Miller states that the committee authorized the increase after having recognized that parking at WA was significantly cheaper than in neighboring communities, and because parking prices had not increased at WA in many years to help offset other school expenses.

“The School Committee initially examined fees for the 2020-21 school year, including the WA parking fee, at our meeting on January 22.  As part of the FY21 budget, the committee did ultimately authorize an increase in the WA parking fee out of the recognition that the previous parking fee was substantially lower than comparable fees charged by other communities, some nearby high schools charge between $200 and $500, and it had not been increased in many years to help offset budget expenses associated with parking at WA,” Miller said.

“Please note that funds raised through parking fees, or similarly, any other fee, cannot be used for anything other than the purpose of the fee.  Parking fees can only be used to offset costs for lot maintenance, traffic guard, snowplowing, etc., and they typically only cover a portion of those associated costs and not the full expense,” Miller said.

Overall, the committee’s decision was met with multiple mixed responses from the student body. In an Instagram Q&A posted by the Ghostwriter, some students, such as junior Adam Quinlan, believed as though junior parking can benefit students by providing juniors with a consistent way to get to school by being able to park in the lot.

“I’m glad juniors can park because [otherwise] I wouldn’t have a reliable way to get to school,” Quinlan said.

Similarly, some students and alumni commend the school for this decision to help increase revenue from student parking.

“It’s kind of smart. It helps the school get money. The senior lot would be half full anyways [due to the hybrid model]. Why not allow juniors in?” WA alumni Chris Brady said. 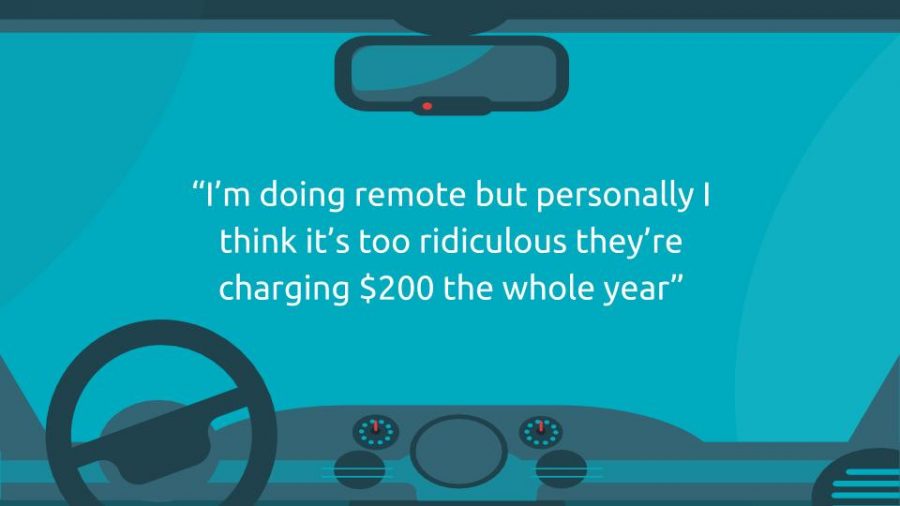 However, others disapprove of this policy change, particularly due to the fact that the parking price has quadrupled from the previous year. Student groups such as Westford Coalition 4 Change (WC4C)  recently crafted an email template for students to send to administrators in an effort to modify the current policy and inspire students to advocate for themselves.

“We knew that the parking pass prices were a source of frustration for many WA students, and wanted to provide an outlet for that frustration; thus showing everyone that there are ways to take action. […] When we realized the disproportionate [financial] effect [the parking pass change] was having on the student body, we created the email template. […] We hoped that by creating a post on a relatable issue, it would inspire people to take action on future DEI [diversity, equity, inclusivity] related issues,” WC4C said.

Amidst the COVID-19 pandemic and hybrid model system, students such as senior Grace Morse feel as though increased prices are unfair due to the availability for both seniors and juniors to occupy the student parking lots.

“I know that we were previously told that the cost was going to increase but there are many factors at play for this year. Firstly, those who are doing the hybrid model are only going to school half of the time they would have. Secondly, juniors are also being allowed to park, meaning [the school] would be getting double the amount of money,” Morse said.

Especially for families who were financially affected by COVID-19, and high schoolers who must work to pay for their passes, students such as Morse feel as though the price hike can be especially detrimental.

“Even with [my parents] paying for [parking passes], it still upsets me that they have to pay that much even though we can afford it. Regardless, the major price change upset me on behalf of my friends and peers who have to pay for it themselves because not everyone has the privilege of their parents paying for their pass. Having to worry about transportation and paying for it puts an extra and unnecessary burden on students who are already facing many changes this year,” Morse said.

Although the parking change was intended to be permanent following spring School Committee discussions, in light of the current pandemic, the committee has decided to remain flexible with any parking cost changes, and they plan to reevaluate these fees before the second semester begins.

“Several fees were revisited in light of the current public health crisis at our meeting on August 17. Due to the uncertainties surrounding this school year, we decided to accept the administration’s recommendation to only charge the bus fee and the WA parking fee for the first semester. This also allowed the administration the flexibility to offer parking to juniors for the fall semester to help decrease the need for more students to ride the bus, and please note that the parking fee is still a lower cost than the bus fee. The School Committee will reevaluate the need for any additional fee for the spring term, and the appropriate amount of any additional fee if needed, before the second semester begins,” Miller said.