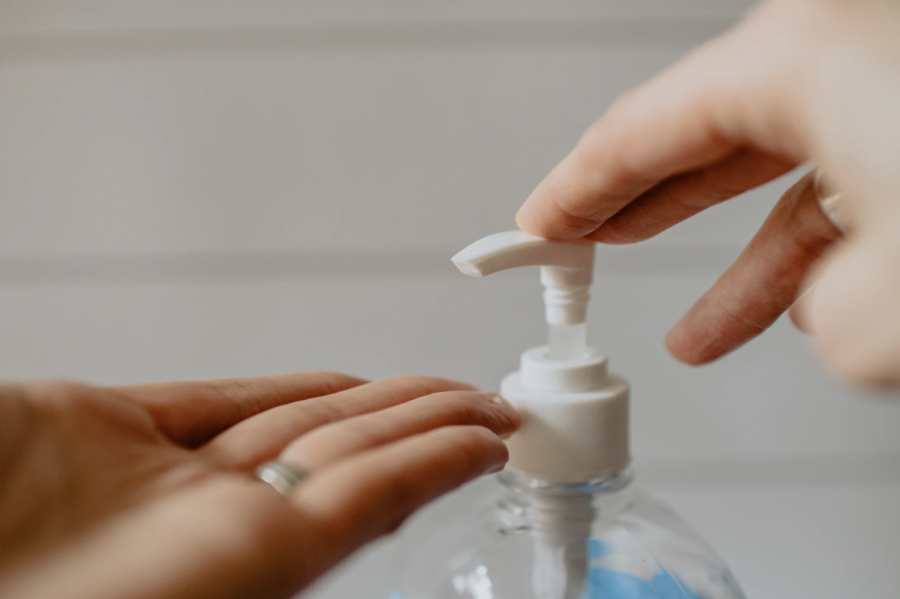 Hand sanitizer is most effective when there is an alcohol content above 50-60%.

On Wednesday, March 18, 2020, Harvard Research Assistant Ben Jacobson met with student journalists from around Massachusetts over a Zoom press conference, discussing the potential problems and questions that the recent COVID-19 outbreak prompted.

A graduate of Princeton University, Jacobson affiliates with the Harvard Global Health Institute and has a degree in biology as well as computer science. During the conference, Jacobson targeted specific questions about COVID-19 that deal with the future of the virus and the effects the virus has on the world.

To start off, Jacobson emphasized the actual necessity of face masks being purchased in bulk.

Highlighting that healthy people do not need masks to prevent disease, Jacobson explained that face masks do not help stop the virus from entering the body, but rather keep sick patients from spreading disease.

On a similar note, Jacobson acknowledged that hand sanitizers are effective when they contain a 50-60% or higher alcohol content. However, the mass purchasing of hand sanitizers disappoints Jacobson since better ways to get rid of germs exist.

“Nothing really beats washing your hands with soap and water for at least twenty seconds with warm water. Doing a really good job with that is the best prevention that there is in terms of hand care,” Jacobson said.

On a separate note, Jacobson explained that the virus started spreading in humans as of December 2019. He revealed there is a possibility that the disease could have existed in animals for a longer time. He remarked that bat consumption may be the cause for the virus in humans since one person eating a bat product could cause the airborne and bodily contact spread of the disease.

Jacobson agrees that overreactions to coronavirus are expected since it is a new disease with many unknowns. He thinks the world is adjusting, a step that comes before controlling the issue.

“There has been a lot of information spreading, some of which is true and some which is not. Part of that is [coronavirus] is happening all over the world, and we are struggling to get accurate data. What we are seeing is that for the flu, the death rate is about .1%, whereas we are seeing death rates in the 2-3% range for coronavirus. So, actually [coronavirus] is significantly higher than the flu, which is concerning and why we have to take this so seriously. There is so much misinformation spreading, it is important to check facts and reliable sources,” Jacobson said.

As countries all across the world implement social distancing and lockdowns, the spread of the disease minimizes since people make less contact with others outside their homes. According to Jacobson, social distancing is effective, but once restrictions loosen and people start intermingling again, COVID-19 transmission could increase — causing a second peak.

“So, the idea of a second peak is basically that by doing all of this social distancing and flattening the curve we can sort of slow things down, but once we decide that it’s been long enough […] you’re going to see transmissions pick back up again,” Jacobson said.

“The hope is just that we can lower the first peak as much as possible and then have a small of a second peak as possible,” Jacobson said.

The fear of China’s second-transmission relates to the situation in the United States, where preliminary social distancing measures are not enough to prevent a second transmission.

Jacobson also brought up the identification of a second COVID-19 strand and reassured that the mutated version is similar to the original strand; So, the effects of both diseases will likely remain the same, curbing fears of the need for two vaccines.

“The companies that are working now are sort of trying to target the portions of the virus that are hopefully not mutating and as we’re looking at things that are mutating, we’re hopefully able to adjust our approach to get a sense of what is likely to mutate […] I’m sure that the people who develop these vaccines are thinking about it and are doing their best,” Jacobson said.

As for the economy, the virus already affects a variety of businesses. With airlines observing a decline in customers, it is inevitable many businesses will further decline, but with a pandemic in-hand, Jacobson believes public health should be top priority before economical rehabilitation can occur.

“If it’s a decision between people’s lives and the economy, obviously you have to do what’s best for the public’s health which means that we do have to shut these things down for the time being. Once we can get over the hump of this and start putting the virus behind us, we can turn to think about how to rebuild the economy,” Jacobson said.

The pandemic also impacts the healthcare system. Currently, looking at the efforts of the healthcare system, testing has been low due to the lack of testing capacity. In a situation where the virus is so contagious, testing is a preliminary step in order to identify who has the virus and to prevent further spread of the disease.

With that said, it could be challenging to determine if asymptomatic people should be tested when there are people displaying symptoms matching the disease.

“[The Department of Public Health] is in a tough situation because they have such a limited number of tests that they have to be really careful about who they’re giving it to, but I think that we really need to massively expand our testing capacity so that we can loosen those restrictions. We’re not gonna be able to turn the corner on this and get a handle on it unless we’re testing many more people than we are now,” Jacobson said.

According to Jacobson, when compared to South Korea — a country doing 15,000 tests a day — the United States should use around 100,000 tests to support its population. South Korea’s massive testing allows them to keep transmission under control.

“The reason that they’ve been able to prevent spread so much is that they’re testing such a large portion of their population. They’re really capturing all of the cases early, and so, they’re managing to quarantine those people,” Jacobson said.

Another important question at hand is if the American healthcare system initially prepared for a panic-inducing pandemic like the coronavirus.

Before the spread of the virus, 30% of hospital beds were vacant, however, with the pandemic, hospital equipment, such as beds and ventilators, are in demand.

Jacobson thinks that although there was no way a pandemic could have been predicted, the American Healthcare system should’ve accounted for the possibility of an event like this occurring and prepared a plan to accommodate a large number of patients.

“We need to be aware that [a pandemic] could happen and be ready for it. We [should’ve] at least come up with a plan,” Jacobson said.

According to Jacobson, with resources like beds in demand, postponing low priority procedures, to increase the number of hospital beds and ventilators, is the most sensible path to take.

“Our hospitals are gonna have to do massive expansion […] and cancel a lot of other procedures to open up a lot of new beds,” Jacobson said.

Jacobson believes that the world can not solve this problem overnight and that the world must seek proper measures in order to eradicate the COVID-19 pandemic from the world.

“It’s such a big issue […] The best way to completely prevent [transmission] is just to keep measures in place for a very long time until we have a vaccine or until we’ve really built up enough herd immunity,” Jacobson said.