Pete Buttigieg discusses plans for future, emphasizes inclusivity for all 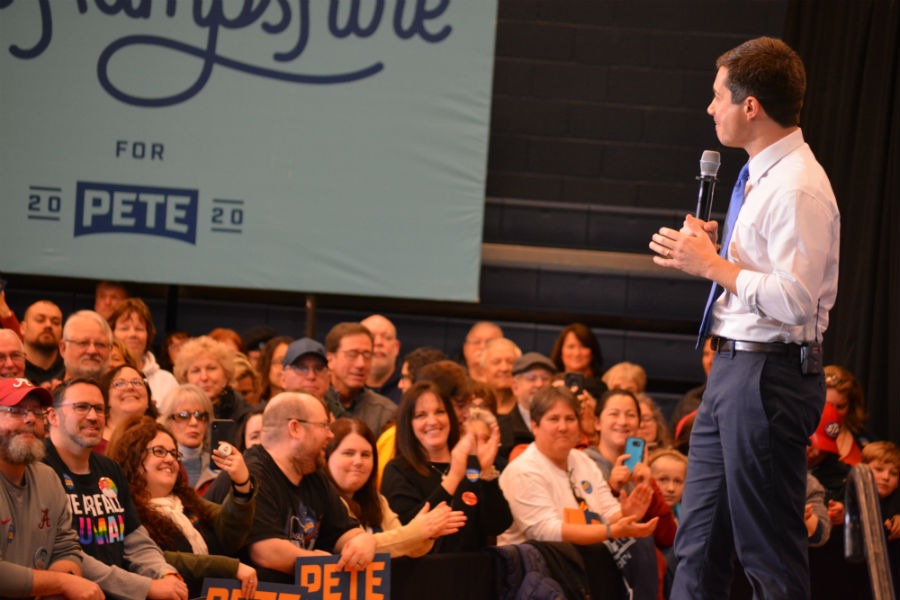 Buttigieg receives a warm applause from the audience.

On Saturday, January 4, 2020, a crowd of potential voters gathered at the Nashua Community College in New Hampshire to listen to Pete Buttigieg speak about his priorities and plans for the future if he is elected into office.

Pete Buttigieg is a moderate Democratic candidate for the 2020 presidential election who is currently the mayor of South Bend, Indiana, as well as a former veteran.  He announced his run for president in January of 2019 and has built his campaign around the ideas of equality and generational change.

As of now, Buttigieg has a 9% national polling average according to the New York Times, pulling in at fourth place out of the twenty candidates. The MassInc Polling Group expects he will receive about 18% of votes statewide.

Buttigieg commenced his rally with a speech of what his vision is for America, and the issues he wishes to address as president. He began his speech by addressing the uncertainty and confusion regarding some of the current challenges the country faces; his signature issues revolve around climate change, the rising cost of living, and gun violence, which he believes will not improve if action is not taken in the near future.

Throughout the first half of the event, Buttigieg discussed the importance of equal recognition for every citizen in the United States, especially when it comes to voting.  Buttigieg plans to establish a 21st-century Voting Rights Act in order to squash voter suppression and make sure that every citizen’s vote is accounted for.

“I’m seeing a lot of attention from Buttigieg to make the disability vote count,” attendee Colleen Flanagan said in regards to the issue.

Buttigieg also emphasized the importance of building a sense of belonging in the nation, namely within the immigrant community.

“Our country is made of people, and you cannot love a country fully if you hate half of the people in it,” Buttigieg said.

His vision of acceptance was also backed up by the fact that Buttigieg wishes to bridge the increasing gap between the Democrats and the Republicans, fearing this will continue to worsen in the future.

“If you think about what [the future] is going to be like we will be even more divided than we are now […] we’re going to need a president that is capable of unifying the American people,” Buttigieg said. 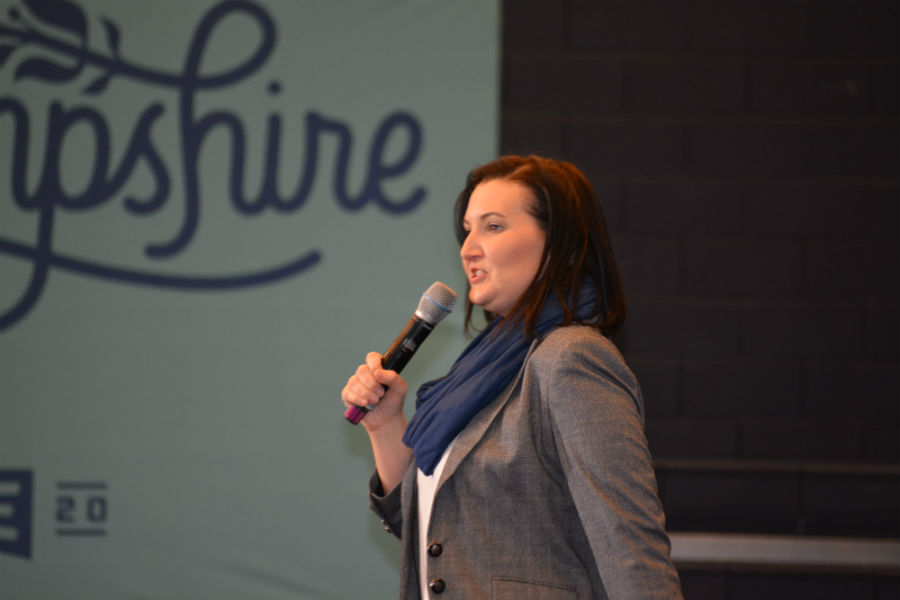 Gallery|8 Photos
Srinithi Raj
Buttigieg is introduced to the audience.

The second half of the session was dedicated to answering questions citizens had regarding his ideas. In a fishbowl-type format, Buttigieg welcomed spontaneous questions from the audience as well as questions that had been submitted by members of the crowd before the event began, giving Buttigieg the opportunity to elaborate on how he will enforce his policies.

Free Medicare for all is one such policy that was stressed in this question-answer session. Currently, there are over 44 million people in the United States without health insurance and another 38 million with unfit health care providers.  Buttigieg’s Medicare for All Who Want It plan would give all citizens the option to have free healthcare while those who are not interested still have the choice to keep their current healthcare provider.

Ken Estabrook, a member of the crowd who was attending a Buttigieg rally for the second time, stated that his Medicare plan, in particular, is one of the main policies that appeal to him.

“I think it’s something that would actually cover people who aren’t covered and leave people who are currently covered under their insurance the way it is, and I think that’s important […] I think that is a solution that is very pragmatic, and one that I don’t hear from other candidates,” Estabrook explained.

Another one of Buttigieg’s policies that appealed to the public is intended to minimize student debt. He plans to make college more affordable for the next generation of students by making college tuition-free for the 80% of working-class families that earn $100,000 or less per year.  To further help these families and those fresh out of college, Buttigieg also plans to expand pell grants for nutrition and the cost of living.

Additionally, Buttigieg wants to change the program in place for student loan forgiveness, which currently requires a person to be in the system for ten years before receiving benefits, making it difficult for people to take advantage of it.  Buttigieg plans to increase the amount of each loan and give people benefits throughout the process, rather than after ten years.

Caleb Richardson, a teenager preparing for college, feels as though Buttigieg’s proposal for student loans would be able to help him after he graduates.

“I’m going to take up so many loans that I’m going to die in debt.  Pete [Buttigieg] is the only candidate who has offered a plan for me to be able to repay loans through community service or public service, things that I definitely want to do,” Richardson said.

One other question that Buttigieg was asked pertained to the protection of LGBTQ citizens, more specifically those who serve in the military.  To guarantee their rights, Buttigieg plans to pass the Equality Act, which would prohibit denying LGBTQ individuals things such as basic housing, a job, or a position in the military solely because of their gender or sexual orientation.  It would also ensure that such discrimination would be prohibited nationwide.

As Buttigieg is one of the more moderate Democrats in the race, his ideas are perceived to be more attainable than some of his other contenders. Scott Peyton, one of the volunteers for Buttigieg’s campaign, approves of his ideas because he believes they will help both Democrats and Republicans to find common ground.

“[Buttigieg] is more moderate than other candidates like Bernie and Warren, but he’s also very progressive.  He’s very pragmatic about the way he approaches the presidency and politics in general, and I think that will appeal to a lot of moderate voters,” Peyton said.

For the public, Buttigieg’s refreshingly realistic approach to politics is what makes him stand out as the candidate of their choice.

“I feel like Pete’s ideas are forward-looking and practical. He knows we can’t become carbon neutral in like seven years. He knows these things take time and doesn’t just say things in order for him to achieve greater appeal,” high school student Connor Sullivan said.

Overall, Buttigieg hopes that through his presidency, he can send a message to be viewed as someone who can lead with integrity and intelligence.  According to Buttigieg, he hopes that one day, citizens will wake up to a morning when current president Donald Trump is out of office and America can “see the sunshine.”