Little Women was a “little” disappointing 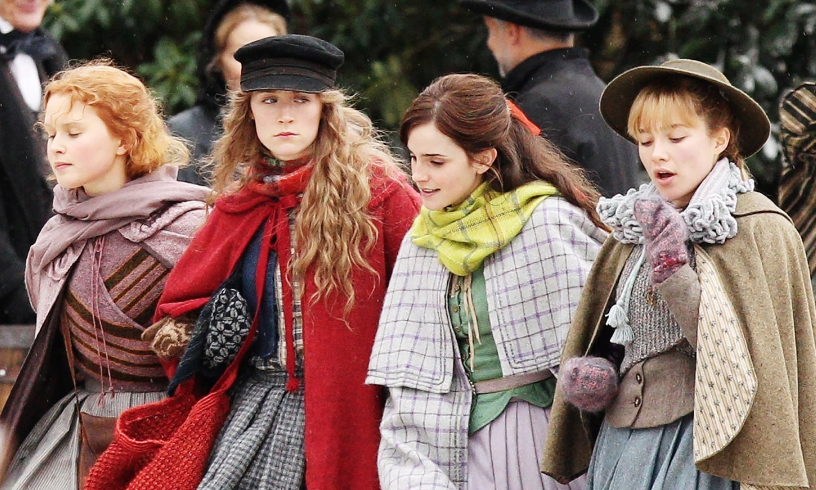 Over the past century, production companies have created numerous feature films and theatrical performances centered around Louisa May Alcott’s novel: Little Women. On Christmas day this past year, director Greta Gerwig released her own version of a film portraying this classic.

Alcott’s classic novel is set in the Civil War period and follows the lives of the four March sisters as they come of age in their small town Concord, MA.

When I first heard that Gerwig’s Little Women film was coming out on Christmas, I was a bit confused of the necessity of releasing another movie after so many wonderful movies, namely the 1949 Little Women film, have already been produced. While watching the new film, I was constantly comparing it to this 1949 predecessor.

Overall, the newer movie holds up to the novel and its famous 1949 predecessor in only some respects. With a moderate budget of  $40 million, the film wonderfully captures the humble origins of the March family in Concord, Massachusetts. Combined with Jacqueline Durran’s effective costuming, the physical elements of the setting were a major success.

On a plot level, the 2019 version beautifully portrays the bond of sisterhood between the March girls, a crucial element of Alcott’s tale.  While the older film embodied a more serious, subdued tone, the newer version personifies a more comedic, lighthearted tone that I felt added to the greater appeal.

Additionally, the background score of the film was also quite enjoyable and better than the 1949 version. Although there were no songs featured in the film, subtle music continually played in the background according to the mood of the scene.

Tied with the physical and technical elements featured in the film, the acting was also one of the most well-executed components of the movie. Saoirse Ronan truly embodied the spirit of Jo and allowed her to standout as the female lead.

Jo’s significance in the film was echoed by another fellow moviegoer.

“Jo’s ability to carry the film was my favorite part of the movie. Since I was a little girl, Jo has been my favorite character because she’s a strong and vulnerable role model for young girls, and I think the movie did a good job showing that,” moviegoer Shirley Desrochers said.

I truly believe as though the visuals and acting were the two main components of the film that have allowed the movie to perform as well as it has in the box office, even better than its predecessor had.

That being said, however, in the newer film, the characters collectively did not seem to fit their roles. The characters in the newer film were generally significantly older or younger than their 1949 counterparts. The old movie displayed some sort of age difference between the girls, making their relationship dynamics seem more realistic. In the newer film, little Amy’s innocent and snarky dialogue simply doesn’t seem too believable coming from Florence Pugh, and 24-year-old Timothee Chalamet simply could not pull off the strong male presence Laurie is supposed to have; although their acting was nothing short of impressive, their salient lack of fit for their roles outweighed the positives they brought to the role.

Overall, although I greatly enjoyed the new Little Women film, there were a handful of fundamental aspects of the movie that left me disappointed. Starting off, the new Little Women film is not as true to Alcott’s novel as is its predecessor. Gerwig’s more modernized version makes the story a bit more palatable for younger generations, yet Little Women is meant to be a period film. Those old, orthodox traditions of the period are not as well portrayed in the newer version.

One of the greatest plot issues I had was regarding the setting and storytelling manner of the film features. For example, the dynamic between the March family is intended to be intimate but formal, as most families were in the late 1800’s. There’s almost an antiquated beauty in how the old movie portrayed the characters’ interactions with one another. Yet in the newer version of the film, there is rarely a frame in which characters don’t chaotically chatter and talk over one another; the lack of a pause makes important dialogue wash over people’s heads instead of being comprehended.

This also makes it so that some important events that happen later in the film are revealed beforehand because of this awkward storytelling method. For example, the fact that Meg is married is revealed in the first five minutes itself, making her actual wedding scene far into the movie seem underwhelming.

Because of this modernization, the movie also compromises emotion with comedy in some of its more crucial scenes. In scenes such as when Jo sacrifices her hair and cries the night after thinking about the loss, the newer movie makes these types of scenes seem more comedic than emotional, while the old movie elicits honest empathy from the audience.

Another issue, stemming from the modernization and trying to make the movie reach larger appeal, is that the movie tries too hard to spoon-feed themes relating to women empowerment, which in some cases came off as preachy and random, especially seen through some of the monologues Amy and Jo deliver. The older movie on the other hand not only talks about empowerment but utilizes subtle details to call out other issues of the time such as child labor and female suffrage in events such as Meg’s introduction ceremony.

Another striking issue with the newer film is the fact that it begins in the middle of the plot and constantly switches timeframes from past to present. Not only did it make the film confusing to follow for even those who know the story, it presented more fundamental issues. The lack of storytelling linearity prevented the characters from receiving gradual, realistic development of themselves and their relationships.

“I haven’t watched Little Women before, and this was my first time. I felt like my head was racing like, ‘oh Jo said this, wait no Amy responded with this’ for like the first hour of the movie. Only after that was I able to pay attention to things like emotion and other subtle details instead of devoting all my energy into just following the storyline,” moviegoer Rama Narayanan said.

Although I was hoping to fall in love with this newer version of Little Women, the fundamental flaws it had outweighed its positives, ultimately failing to portray that perfect, heartwarming tale many generations have grown up on. No matter how great the visuals and acting were, simply put, this version is quite incomparable to its more rich predecessor. Honestly, wait until you can watch it on Amazon Prime or Netflix.