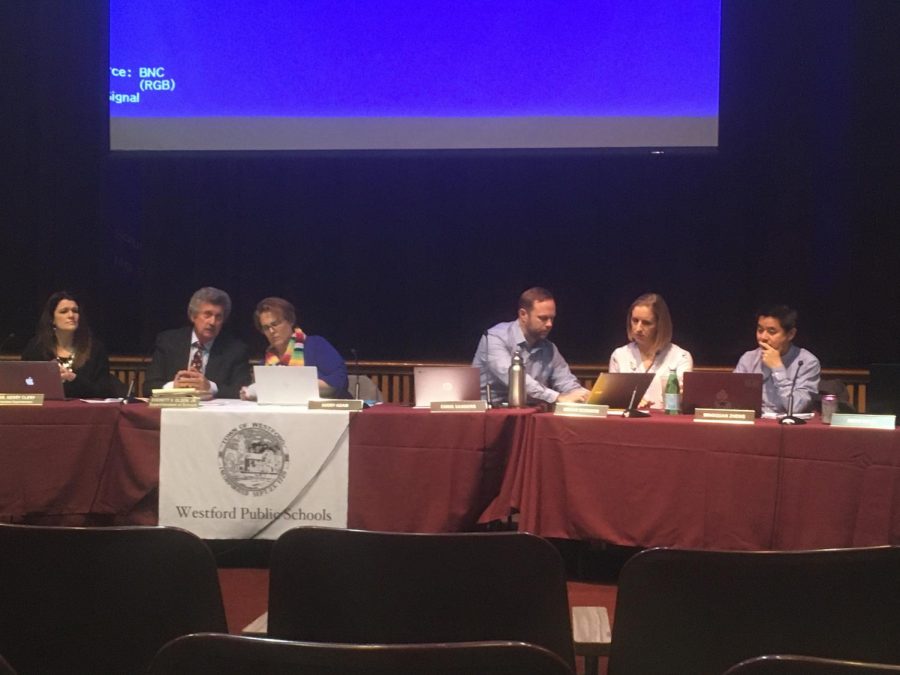 On Monday, December 16, the Westford School Committee met at the Katie Enos Auditorium in Blanchard Middle School to discuss several budget cuts district-wide, as well as findings from the advisory committee regarding shifting start times for all schools K-12.

Differing from the meeting last Wednesday, December 11, attendees of the meeting were able to voice their opinions regarding budget cuts throughout the meeting. The assembly commenced with a public comment, allowing several Westford citizens to remark upon the changes proposed on the 11th.

Several people in the audience questioned whether or not the budget is being manipulated to conform to what our school system needs and if what the people voted for in the override three years ago is being delivered as per their wishes.

“I think the override, as it impacted our school last year and the year before continues to play a part […] I feel like it’s become an elephant in the room, so I feel it’s important for not only me, but for people in town, I’m asking, ‘do you feel like it [the override] complied with what people wanted, because the schools were seemingly doing well […] do you feel like […] what we got, […] was we what we voted for?” WEA president and WA history teacher Michael Colson asked the committee.

Others expressed concerns that cuts to programs and teachers have been based off of mainly decreased enrollment and class sizes. To some, these factors do not accurately vouch for why these programs deserve to be cut.

“I personally believe that the way we are currently looking at this issue is not taking into account the full picture of things […] When we were talking last meeting about cutting teachers and cutting programs, we were more focused on the numbers, such as class sizes […] In my opinion, this is a very abstract way of looking at the problem […] because a teacher is much more than just a statistic,” WA senior Zachary Roberts said.

After Roberts and WA senior Kavya Desikan addressed the board, Superintendent Bill Olsen and School Committee chair Avery Adam commended the student activism, awareness, and involvement with the recent cuts, and Olsen stated that he would be open to a discussion forum of sorts at Westford Academy or at his own office to allow for transparency among the student body.

Following the public comment, as part of the reports of the School Committee, Olsen confirmed that his retirement will likely be with the class of 2022.

The committee recommends moving forward with the removal of the 0.6 physical education teacher at Westford Academy. It has been a goal of the committee to reduce the student-teacher ratio of physical education from 30:1, to the standard classroom size at WA: 25:1. With the termination of a 0.6 PE teacher, the ratio will increase to 31:1.

Although the committee is moving in the opposite direction of their goal, in likely moving forward with removing the 0.6 teacher, they stated they don’t consider the impact on the student body to be tremendous.

“We do have to make sure that we’re able to close this gap between funding and services that we provide, and you can see here because of the number of PE sections that we have, there are quite a few of them, as well as health, because they are the required courses […] reducing the 0.6 is going in the opposite direction, but doesn’t have a significant impact on the class size as of yet,” assistant superintendent Kerry Clery said.

Along with the discussions regarding the positions of the PE and music teachers, the Women’s Empowerment elective was brought up. There was question as to why the class was cut for the FY20 school year, regardless of high interest in the elective a couple years ago. To this, WA principal, Jim Antonelli remarked that the fluctuation of enrollment and student interest in the class was what led to the cut. Committee member Gloria Miller stated that some electives could be offered every other year to allow them to continue.

The School Committee was then presented with a presentation regarding school start times from the citizens advisory committee. The committee presented three main topics they researched while considering a change to the start times district-wide: student well-being, transportation and finance, and student-family schedules.

According to the committee, the financial impacts of shifting school times is unknown. They recommend looking further into this to move forward. 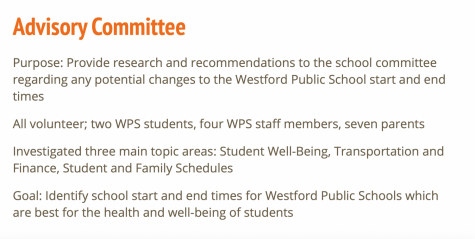 The advisory committee utilized input from parents, students from WA and the middle schools, and staff from a survey they sent out, and they crafted a front running model of school start times, as well as several other alternatives to address the problems that the recommended model creates.

Although the recommended model meets the needs of health and well-being for students, problems could arise with child care. As the younger students get home earlier than the older children, parents cannot depend on older siblings to take care of their younger ones.

Similarly, younger students in after school care, who will be let out earlier, will spend an increasing amount of time in their school gym or cafeteria waiting for their guardian. Some state that this is not ideal for the mental well-being of the students, considering their age. 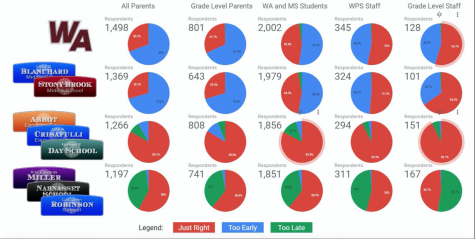 “If you look at that 1:50 end time for K-2, you’re talking four hours and ten minutes for several students to be in after school care at the age of five, six, or seven. Ultimately, we need to look at the impact on those youngest students […] because a five year old in an after school program for four hours and ten minutes is very concerning, and I don’t think that’s developmentally appropriate at all,” 5th grade teacher Cara Parker said.

The main incentive for keeping WA start times early is to reduce the impact on extra-curriculars, mainly sports. 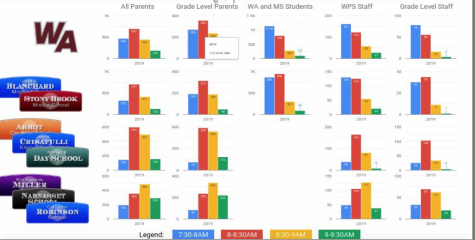 However, Megan Eckroth remarks that WA has the earliest start time and release in the Dual County League, thus she doesn’t think that students who play sports will suffer greatly with the later shift in start times.

“In looking at those schools [in the Dual County League] and their start and end times, we are by far the earliest. So I don’t know why our students think they wouldn’t be able to get to their games. What we heard from student council […] is that they [WA athletes] are often sitting around, waiting for teams to arrive from other schools, cause they’re still at school, and when we go to their schools we’re waiting for them to finish school,” Eckroth said.

Additionally, as grades 3-5 are let out at the same time as K-2, the district may require additional busses to accommodate the transportation of students to their respective schools at the same time. This will thus impact the budget, as the town will have to allocate an increasing amount of money to the Dee Bus Services.

The committee plans to understand the financial impacts of the models, and send out surveys for feedback to families and staff in regards to each model presented at the meeting.

In regards to future meetings, the committee wants to see ‘the greater breakdown of Westford Academy’ to effectively make decisions regarding the school, and to better understand the impact that their decisions may have.

“We will be discussing our world language departments, our English departments. Prior to these decisions, I want to see these numbers for every class and every section,” Miller said.

There is a Select Board Meeting Tuesday, December 17, where Town Manager Jodi Ross will present Westford’s budget. The next Westford School Committee meeting will be on the 13th of January.