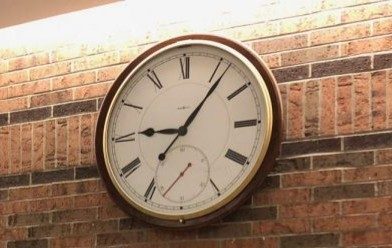 Clock hanging in the Bell Lobby

For the past two years, the school committee has been proposing later school times. They hope to implement this change next year but there have been many factors that they must address before they execute the plan.

Information has been collected regarding this topic through Challenge Success, whose main motive is to reduce student stress and improve student health. This same goal is hoped to be achieved through changing the start time.

Chris Sanders, school committee member, says the whole purpose of changing the start time is to increase sleep duration. From a Challenge Success survey in 2016, the committee found out that on average, a WA student gets 6-7 hours of sleep. However, the recommended amount for teens is around 8-10 hours.

Low sleep can cause many problems in students, ranging from heath to social emotional issues, showing how detrimental sleep really is. Increasing the amount of sleep a student gets has shown to lower stress levels, improve mental health, etc.

Sanders says that scientifically, adolescents don’t start producing melatonin, a hormone for sleep, until around midnight. So, moving the start time would give them that extra half an hour to make up for going to bed later.

“Biologically, the adolescent body doesn’t start producing melatonin until later. Basically, I think the average teen student is not ready to go to sleep at 9:30. They’re going to be up anyways, so by shifting the time they can get [an extra half-an-hour],” Sanders said.

Even though the main goal for changing the time is for more sleep, additional benefits include better academic performance as well as more specific ones like better attention when driving.

WHAT ARE THE VARIOUS CHALLENGES THAT THE COMMITTEE HAS FACED WHILE DISCUSSING THIS IDEA?

The challenges the committee are facing include decisions about after-school sports, bus scheduling and budget cuts.

According to Sanders, when it comes to sports, which a majority of WA students are involved in, Westford Academy is actually one of the earliest and latest ending schools in the Dual County League. Many other schools in the county have changed their times. So, moving the school time won’t collide with game schedules of other schools.

“As it turns out, if you look at the Dual County League, we’re actually one of the earliest starting and ending schools. So we have some room to make changes,” Sanders said.

Another challenge the committee faces is bus scheduling. Currently, there are three different groups of buses that operate: the high school, middle school and elementary, but by shifting these three bus schedules, younger kids get out of school considerably late.

An idea proposed for that problem is to switch the younger kids to start before the high schoolers and middle schoolers.

“We call that a flipped-bus schedule where we have them go to school early because little kids get up early anyway. So that’s a possibility,” Sanders said.

Two main concerns have been raised to that proposal. The first is parents’ fear for their child’s safety during the winter when it is dark. The parents are concerned a vehicle driving in the dark won’t be able to see their child waiting for the bus.

“One [concern] is that if it’s early, the sun hasn’t come up in the winter. People said they don’t necessarily want their youngest students waiting in bus stops in the dark. If people [are] driving, maybe they won’t see the students,” Sanders said.

The other concern is how families would adjust their schedule.

“Another consideration is families’ schedules. The way we do it now is the way they’ve sort of built their lives. It’s a consideration, that if we flip all that around, it might really throw some families into disarray or be difficult,” Sanders said.

No matter whether the younger kids are switched to an earlier time or not, the committee decided that the three tier busing system will be combined into two, with high school and middle together making the first tier and K-5 being the other.

This decision, however brings up a constraint, money. Budget will have to be cut even further next year since combining bus groups requires more buses. Later school times were actually supposed to be implemented this year, but with so many budget cuts last year, it had to be pushed to the year of 2021.

“You need more buses because you’re jamming more students at once […] we would need to fund more busing. And with the tight budget situation last year, we had to make some really difficult choices […] we ended up saying let’s hold off on that because we need more busing,” Sanders said.

HAVE OTHER SCHOOL DISTRICTS CHANGED THEIR TIMINGS?

Many schools have already changed their school times by thirty minutes and the school committee is using them as a model to go forward.

“We’ve seen that a lot of schools have investigated and have actually made that switch to a later start time,” Sanders said.

The committee has been taking a look at other school district websites to understand how they approached it. They have also been reaching out to a few on how other districts have been planning their bus schedules.

HOW IS THE COMMITTEE INCORPORATING THE PUBLIC INTO THIS DECISION?

With the numerous challenges to the change, the committee wants to make sure Westford residents are on board with it.

They have been trying to spread the news and gain feedback from residents through surveys, such as the one given to WA students in 2016. To get the parents’ opinions, the committee will soon send out another survey.

Sanders believes that in order to make this plan a true success, the community needs to know and fully comprehend what’s going on. So, they have been spreading the message about later school times, so that when it does happen, people won’t be surprised.

“Their voices guide the process as much as possible […] If you haven’t convinced people it’s important, change is going to feel even harder,” Sanders said.

A point made by Sanders was that it is inevitable there will be a few families who are against the idea. It would be very hard to please everyone with so many challenges being posed.

“It’s going to affect everybody differently. And I think for some people, it will be better and some people it will be worse. And we just have to kind of balance that out and see what makes sense,” Sanders said

OPINIONS OF STAFF AND STUDENTS OF WA

Jennifer Hoffman, an AP biology teacher, sees a positive and negative side to the idea. Having a five-year old child, Hoffman finds the later school time to be helpful but consequently, as a teacher, she wouldn’t be able to help students after-school.

“I think for myself getting out of the door in the morning with a five year old would be very helpful, however, I would not be able to stay for after-school help,” Hoffman said.

Hoffman also mentions how many are worried about how traffic would affect their schedules and adds that club members would be affected as well.

Junior Anika Burli, similar to Hoffman, sees a positive and negative side to the idea. Burli thinks it’s good in the sense that it will allow more time for sleep, but at the same time doesn’t like how clubs and activities will be pushed to a later timing.

Junior Tanya Sawhney doesn’t think thirty minutes will make much of a difference. Sawhney mentions students who play sports will be at a disadvantage since they won’t have time to complete their homework after the activity.

Stacey Craven, a math teacher, is overall not for the change. She thinks a thirty-minute change would not make much of a difference and mentions how clubs would be affected. For example, Craven mentions that if the elementary schools were to be flipped to start before high school, then after-school clubs that involve high schoolers going to elementary schools would not continue.

For Craven, personally, she would encounter more traffic when she enters and leaves the school with the later start times.

She believes the research supports more of an hour change, not just thirty minutes, but she is open to trying it out.

“I would be open to trying it and maybe do a year trial, but I think there will be a lot of things to be worked out,” Craven said.