The highs and lows that come with being an Indian American

The struggle of finding yourself in a country of assimilation

My name is Anushka Patil, and I am an Indian American. A simple phrase that holds the bulk of my identity.

Ethnicity, race, culture, and nationality all factor together to create a unique individual who fits into a distinct part of society. Across the world, there is a myriad of ethnic backgrounds, ranging and originating from Central America all the way to the Middle East. These ethnic backgrounds work to define a person, giving them guidance, self-awareness, and an unexpected home. Many people grow up surrounded by others of a common ethnic background. However, when submerged in a country like the United States, in which a diverse array of ethnicity is prominent, a person may end up lost in their search for identity, struggling to balance their internal awareness with the society around them.

Personally, I am of Indian descent. Both of my parents grew up in India, specifically in a southern region known as Karnataka. After getting married, they immigrated to America, where they bought a tiny home in Boylston to start their life-long adventure in a foreign land.

Every year my parents take my sister and me to Bangalore, a city in Karnataka in which my relatives live. We enjoy boiling summers with our extended family, catching up and forming close bonds in a span of three weeks. Often, I travel to the villages that my grandparents grew up in. There, I learn much about my culture, witnessing first hand the spicy texture of the food, the vibrant reds of buildings, and the crowded, loud roads that fail to give a person any form of tranquility.

My parents always tell me that I am lucky for the exposure that I have been given. Not until now have I realized what their words mean. Many people live their entire lives in one area, surrounded by others who share the same heritage. I, in fifteen years, with my Indian background and my American childhood, have learned about many cultures, ethnicities, and traditions that some spend their entire lives discovering.

Growing up, I celebrated Christmas and Diwali. Both are festivals of light, but for extremely different cultures. For Diwali, my family went all out, decking the house with lamps, cooking flavorful food, and putting up multi-colored lights around the property. For Christmas, we bought the tree, the presents, and even the wreath, celebrating the holiday with as much cheer as we could. However, when I told people this, some found it interesting that an Indian celebrated Christmas. They thought just because I come from a certain background, it means that I am not allowed to participate in other holidays. The holiday experience is one of many in which I have been called out for not sticking to my own ethnic traditions.

This situation perfectly exhibits how different ethnic backgrounds are perceived. I think that some may see me as more of an Indian rather than an American, limiting me to the entire American experience. Seeing as to how Westford is extremely diverse, I personally do not feel targeted living in this town. However, on a national level, I believe that my culture singles me out as a minority rather than an equal.

Alternatively, I do not think it is because of any form of racism.

Instead, it comes from the unfamiliarity some may have with the Indian culture, oblivious to the fact that I grew up American, just because of my skin tone.

As a whole, I think my culture is perceived in a negative light. By saying this, I am not trying to shame anyone, nevertheless, I would like to point out the attention and stigma surrounding my ethnicity. When people think of an Indian, I believe they associate everyone part of the ethnicity to a set stereotype, which is not the case at all. This image is quite different than the norm for most in America, a difference that is not necessarily a bad thing. However, people are so quick to associate with people who are like them, rather than people they view as different, causing the divide between cultures.

Over the summer, for an assignment, I read The Namesake by Jhumpa Lahiri. Set in the mid-to-late 1900s, The novel revolves around second-generation Indian-American Gogol Ganguli as he tries to find a balance between his ethnicity and his nationality. Gogol faces multiple situations like having an uncommon name, celebrating Indian festival and American traditions, and being worried about his perception in American society. While reading the novel, Gogol’s reality seemed oddly familiar; I have faced many of the same situations as Gogol. When discussing the novel with my friends, their rash outlook of Gogol perturbed me. The fact that they thought Gogol is just too overdramatic bothered me. To me, I can see exactly where Gogol comes from, relating to the tiresome journey of self-discovery.

I understand why people are so quick to judge due to the many stereotypes surrounding the culture, smartness being one. At Westford Academy, and around the country, Indians are viewed as smart, solely interested in their studies without any desire for a social life. This misunderstanding causes people to be intimidated by, or frankly uninterested, with society’s connotation of a ‘nerd’. Also, the standard of intelligence that we are held to is unfair. Just because I do not receive straight As does not mean that I am any less Indian. The constant need to be as smart as society expects me to be is exhausting. At the end of the day, intelligence is not and never will be based on ethnicity.

We all do not have the same personality. This seems like a given, right? However, you’d be surprised by the number of times people have treated me like other different Indian girls of my age. I am not trying to bash anyone else, nor am I trying to act like I am the best Indian girl out there. People should judge me by my personality, rather than one of another Indian girl that they met in the past. For example, when there is a free seat open, it feels like a stranger tends to sit with the white kid rather than the brown girl, knowing nothing about either of us. The idea that each ethnicity having a designated personality assigned to it is morally wrong, a judgment that needs to disappear in order to move forward as a society.

In the same way, we all do not have arranged marriages. It is not a law nor an expectation in every family. It is simply just a conclusion made by people not part of the Indian culture.

Specifically, to me, I frequently feel misidentified due to the birthmark centered in the middle of my forehead. Perfectly rounded and sized, my birthmark is often misjudged as a bindi, a colored dot that Hindu women wear on their forehead as a symbol of protection. So, stereotypes come easy to me, since strangers are quick to make an assumption that I am a devoted Hindu, just because of the birthmark on my brown skin. Many then become reserved around me, unfamiliar with how to approach the person they have pictured.

I think, as previously implied, the constant stereotyping of the Indian race and culture causes my ethnicity to be viewed in negative ways.

From being considered strict and uptight to smart, malodorous, and unusual, the Indian ethnicity is constantly being defined in a singular way.

The plethora of stereotypes labels each of us the same, even though we all have our own personalities and backgrounds that make us unique. The categorizing of all Indians together ultimately causes a little rebellion from some individuals who wish to be classified based on themselves rather than their ethnicity.

This rebellion can be seen through forms of assimilation, in which young and old Indians alike put on a persona to hide any relations to their culture. Whether that be wearing an arm full of scrunchies or spraying themselves with bottles of perfume to hide the smell of the authentic Indian cooking, American assimilation of Indian-Americans is prevalent in today’s society. 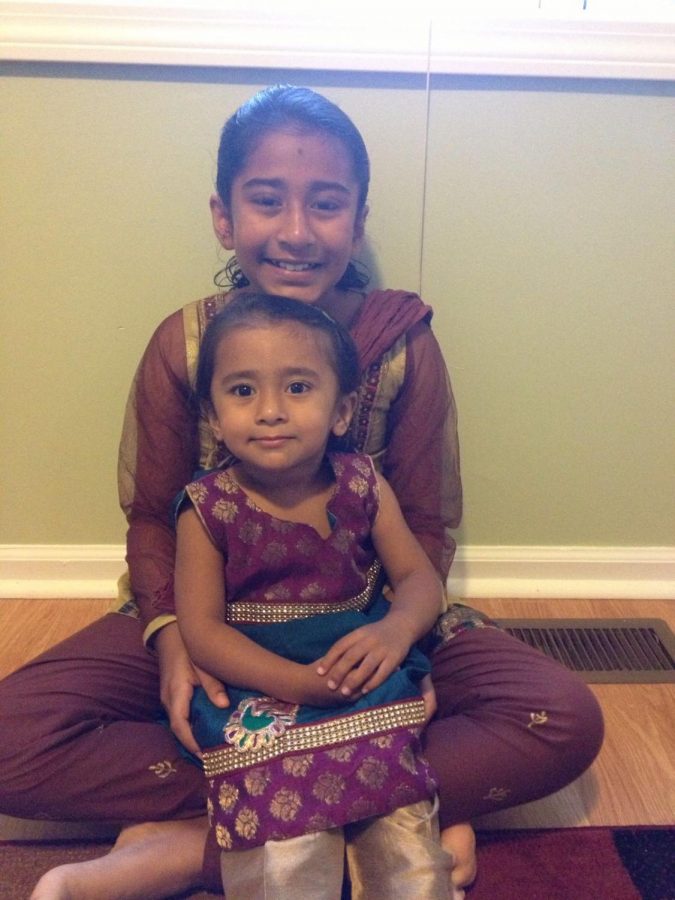 Gallery|7 Photos
Ravi Patil
Anushka Patil and her sister Esha Patil pose for a picture. They are dressed up in traditional Indian attire to celebrate an Indian festival.

Neglecting your ethnicity to fit into a setting is a global problem, not only plaguing the young generations of Indian-Americans but many other adolescents around the world. Students should not have to change themselves to be included in certain groups or to be respected. Each individual’s background is special and must be protected at all costs. Feeling shame and disgust towards your ethnicity only fuels the fire of racial distaste. Instead of allowing specific races to be seen in a positive light, promoting other identities and backgrounds is essential for everyone to feel valued, welcomed, and prosperous.

I struggle to balance between choosing which morals and values I want to follow. On one hand, I could choose values from my Indian heritage, or I could pick values from my American nationality. For example, choosing between a turtleneck and a low-cut shirt, do I pick the top that would be scorned upon by many people in India, or do I pick the top that American fashion fits with. Finding a balance between what values I want to accept is a challenge I face on the norm.

My parents’ outlook often frustrates me. I can’t blame them for seeing a particular situation in a restricted way since they grew in a totally different country with different societal rules and standards. Although I have been blessed with the most supporting, compassionate parents, we constantly struggle to find a middle-ground that satisfies both of our needs.

Going back to the divide, I see where it comes from. People of different ethnicities are often confused or unaware of specific information about someone’s background. Instead of trying it to approach a new person with a judgment-free mind, it honestly may sometimes seem easier to avoid the situation altogether. Sticking with what is familiar, it can be safer to be part of groups in which you feel understood. Nonetheless, I think it is important that we, as a school and a generation, step out of our comfort zones to form new friendships, irrespective of the anticipated awkward, first conversations, to bridge the gap between social and ethnic groups.

Moreover, I will say that there are countless other positive situations that left me feeling lucky to be Indian. Whether it compliments for my eyelashes, my hair, or my interesting, ancient culture, I have felt gifted numerous times. Even though the constant battle of proving your own identity amongst the sea of others is exhausting, I would never change the identity that surrounds me. Especially living in America, I have learned to appreciate my heritage more than I would have if I lived in India, gaining a wider perspective of other’s cultures and the beauty of my own.

I will forever cherish the values and lessons that come with being Indian. I think it goes without saying that despite what ethnic background you are from, we all face internal conflicts concerning the way we are projected in society. As individuals, knowing our worth is critical to find our identities amongst the numerous other factors that make us the unique individuals we are today.