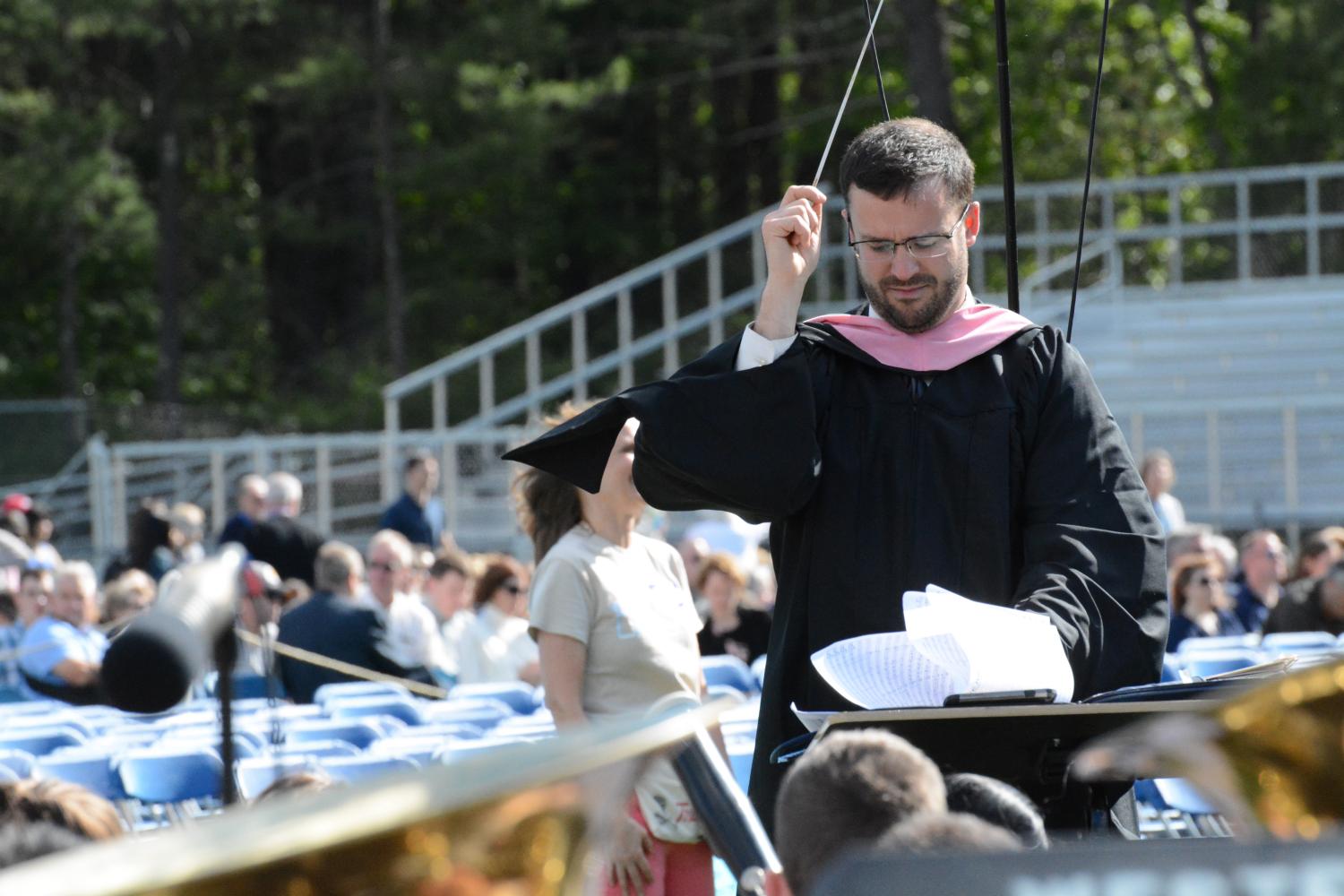 Arsenault heads to AB, leaving mark on culture and community

Arsenault heads to AB, leaving mark on culture and community

It is the end of an era for Westford Academy’s music department: Next fall, band director George Arsenault will be moving up to be the Director of Performing Arts at Acton-Boxborough Regional High School, a position similar to that of a curriculum coordinator.

Arsenault was not looking for an administrative position, but when the position opened at AB and he was reached out to as a potential candidate, he decided to take the opportunity because of its uniqueness. Not only are job openings for music administration rare, but the school is close enough that he would not have to uproot his family.

“I could stay in Westford for the rest of my life […] [but] these opportunities for these positions — sometimes they won’t roll around again for another ten or fifteen years. Yeah, so it was a very difficult decision to make, but I think at this point in my career, the right one,” Arsenault said.

Unlike most administrators, he will still be able to teach by directing the bands. The opportunity to continue to connect with students directly was a large part of why he decided to apply for the job in the first place; he feels that it is too early in his career to stop teaching.

Visual and Performing Arts Curriculum Coordinator Andrea Mejia considers his ability to focus on the individual to be one of the hallmarks of his teaching.

“He’s really engaged the students with the choices he makes for the program itself. He works in our electronic music classes and he really customizes the course to what the students’ interests are […],” she said.

Junior Eunice Pak, who has had Arsenault as a band director as well as an electronic music teacher, feels that Arsenault can inspire the individual in a way that few of her other teachers and conductors can.

“Even though he’s not giving you a one-on-one private lesson, he’s able to create this sort of drive inside of each individual person to go and pursue whatever they want to pursue, whether it’s music or not,” Pak said.

When Arsenault came to Westford Public Schools thirteen years ago, the band community at the middle and high schools was small and generally not noticeable. Now, as he closes the door on his final year at WA, both Marching Band and Concert Band are much larger as well as playing challenging pieces, and both have become competitive at district and state competitions.

This change, however, was not due to direct action by Arsenault but instead by his efforts to create a strong community, which propelled the students themselves to improve.

“I’m don’t know if I’ve transformed anything,” Arsenault said. “You know, we moved slowly, and I made sure that the students understood that they were always the most important thing, never the music and the music is just our vehicle for building a community. […] So we got to develop community through excellence, but never at the expense of the human,” he said.

By building a community that can perpetuate itself, Arsenault has full confidence that the bands will continue to perform at a high level and remain motivated even without his presence.

“He helped bring this community out of nowhere, I don’t want to say that the band like started from nothing, but when he came, you know, people always say, ‘he built that program’. And I think the biggest thing he built was the community. And I think that because of all of our bond, our bond, I think the atmosphere will still stay the same,” Pak said.

In fact, Arsenault believes that he could have been out sick for most of the school year and the bands would have still accomplished much of what they did with him.

The most notable of those accomplishments was the Combined Bands’ performance of the Westford Suite, a piece written specifically for WA students by Daniel P. Lutz. This performance, a highlight of Arsenault’s time at WA, would not have been possible for him to coordinate early in his career.

However, his growth as a teacher made it possible for him to take on these challenges in recent years. Arsenault credits his colleagues in the music department such as Michael Towers and Karen St-George for this improvement, from whom he has taken various skills and put them into practice in his own teaching.

Though he is always looking to collaborate and share with fellow music teachers, he rarely has the time or opportunity to do so. As such, Arsenault highly anticipates being able to interact with teachers across the district in his new position.

Mejia believes that Arsenault has been going above and beyond with collaboration even at WA, citing an example of him immediately reaching out to make a new elementary band teacher feel welcome, and is therefore well-suited to an administrative position.

“This position is predominantly collaborative […] I would say collaboration is a key component of this position, as well as communication — those two things go hand in hand,” Mejia said.

His experience working with others will be an asset as an administrator not just because he has experience collaborating but because he has insight into how the other music programs work. He already has plans to build an orchestra program at AB, which does not exist despite there being a successful band.

However, Westford will always be a home for him.

“I’ve worked with the Veterans Association and Kiwanis committee and all the people in the community of Westford. It’s where I’ve raised my kids and where I have kind of, I think grown up as a teacher. So there’s a very strong bittersweet [feeling],” he said.

Mejia seconds the sentiment of growing up, believing that though the department will feel Arsenault’s loss, she considers this cycle to be natural.