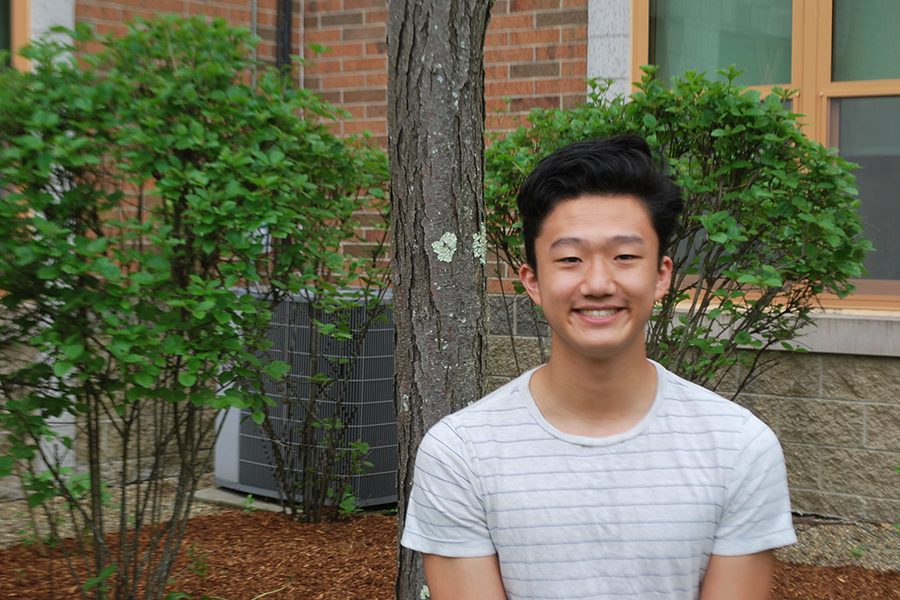 As the class of 2018 wraps up their high school experience, Westford Academy has recognized senior Anthony Zhu as salutatorian of his class. Zhu never let his academic success get in the way of his humility, and during his time at WA he focused on his passion for school and his passion for helping others.

Zhu has always been one to push himself to the best of his abilities. According to Zhu, his parents made sure to provide motivation to excel ever since he was young, while at the same time they gave him independence and let him figure out what he wanted to do.

“They encouraged me a lot to do well in school,” Zhu said.

As a result, throughout his high school career, Zhu made sure he was consistently challenging himself to the best of his abilities in academics. All his classes as a freshman were at the honors level in order to have flexibility in choosing honors and AP classes later on.

“I thought that would give me the most options in choosing courses later on because I didn’t really have a […] solid idea on what I wanted to do,” Zhu said.

Entering his sophomore year, Zhu made a decision to focus on more science classes. He continued to take complex courses, including Java Programming Honors and AP Statistics.

As a junior and senior, Zhu made sure to take as many AP science courses as he could, which consisted of Biology, Chemistry, Computer Science, and Physics. He found Physics and Computer Science to be influential courses in regards to deciding what he wanted to do, along with AP BC Calculus.

Along with his AP science classes, Zhu also demonstrated an interest in social studies through AP Psychology and U.S. History, resulting in eight AP classes over the course of his high school career.

AP Chemistry teacher Timothy Knittel taught Zhu as a junior and emphasized how successful of a student Zhu was in the class. Zhu came into the course with strong math skills, logic, and reasoning. Over the course of the year, Knittel found him to be a quiet but methodical student who never complained about challenges but rather found ways to solve them. He collaborated well with others and continually turned in high-quality work.

“He stood out in every way, I would say,” Knittel said.

Aside from academics, Zhu has been actively involved in sports and extracurriculars throughout high school.

Zhu started playing basketball as a freshman but did not continue it. Instead, he started track and cross country and ran cross country all four years of high school. Additionally, after playing at the end-of-year volleyball tournament in sophomore year, he played on the school team during his junior and senior years.

Due to being a part of the athletic teams at WA, he was not able to dedicate himself to clubs as much. He was a part of the math and programming teams only for his freshman year. As a senior, Zhu joined mock trial and enjoyed learning about the specifics of the legal system.

“I think it gave me a more well-rounded view of the material that was taught in class, or just knowledge of the world, because [in] a lot of the clubs, the stuff you learn is more practical,” Zhu said.

Along with clubs and athletics, Zhu was actively involved at his church and did a lot of volunteer work there, such as teaching Sunday school and helping out at the summer camps, which were experiences he found valuable.

“I think it gave me a greater appreciation for other people, especially since I was working a lot with my peers and seeing all the different perspectives that they have, especially working with young kids. It was just really joyful, seeing kids be kids and also being able to relate to when I was a kid, and see things that way,” Zhu said.

Through his experience volunteering at his church, Zhu has been able to grow in confidence and become a better leader as a result.

“It also helped me out a lot with speaking skills, because I would have to go up in front of a group and explain a game or something, or give announcements, so it helped me develop my confidence and learn how to work better with people,” Zhu said.

His guidance counselor, Wendy Pechacek enjoyed working with him and commented on how Zhu has grown as a student and as a person through high school. She described him as kind and talented, and she has seen a growth in confidence in him over the past four years. As a strong student, Zhu never needed much assistance in academics, but his intelligence did not make him lose his humble nature, a quality Pechacek believes will help him in the future.

“In learning situations, it’s not just about him. It’s about everybody kind of going along together, and I think that’s going to serve him well in college and certainly beyond that,” Pechacek said.

Zhu also learned to pick a path for himself that he felt passionate about, rather than picking something he felt obligated to do, which Pechacek found was important in how he decided what he wanted to do.

“I’m just really proud of him. He’s an amazing person, and I’m really excited to see where he goes from here,” Pechacek said.

As a college student, Zhu is looking forward to learning about engineering and taking courses he will be interested in. Outside of the classroom, he plans on staying involved in faith communities and playing intramural sports including volleyball, basketball, and ultimate frisbee. Although Zhu does not plan to continue to run for a team, he hopes to continue running as a hobby in his own time.

Overall, Zhu enjoyed his years at WA and is grateful to have had people such as his parents and the WA faculty support him throughout his high school career.

“It was a good four years,” Zhu said.