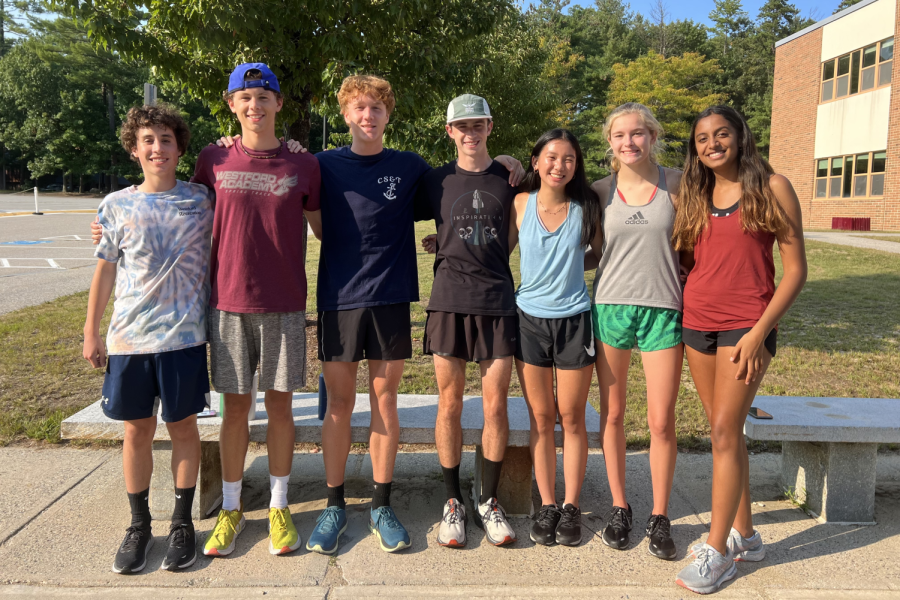 As one of the biggest sports teams at WA, the Cross Country (XC) Team is known for its excellent performances in both its regular season meets and regional level races. Its impressive race times, however, are only a result of the team’s passionate and dedicated runners who share a bond like no other.

From summer captain’s practices at 8 a.m. and pre-season joint training, the team has established a sense of unity and kinship before its first meet against Acton-Boxborough on Wednesday, Sept. 14 at 4 p.m. at Stony Brook Middle School.

“Our program’s strength is the team culture we have built. All our runners come to practice ready to put in their best effort and make good decisions,” Head Boys’ Cross Country Coach Scott Hafferkamp said.

After the Boys’ Team concluded with an undefeated season last year, they are confident in what lies ahead this upcoming season as four senior captains lead the way – Austin DeSisto, Cam Douglas, Dan Ottesen, and Owen Schultz.

“Our boys’ team seems to be really strong this year after training all summer,” Schultz said. “We’re all [boys’ captains] excited for this season.”

Last year was especially difficult for the girls’ team as the majority of runners were out for the season due to injuries. The lack of athletes ultimately affected their race results; however, this setback only motivated this year’s group to improve their placing in the Dual County League (DCL). This year, seniors Alison Chen, Sharayu Tekade, and Kaitlyn Walpole will be leading the girls through a hopeful season.

“Last year was definitely tough for the girls,” Chen said. “This year we have almost double the amount of runners for the girls team, which definitely seems like a stronger team.”

While the entirety of the team consists of devoted students from freshmen to seniors, the team has already developed a close bond. From Spags (spaghetti dinner nights) before meet days to team traditions and spirit days, it wasn’t a challenge for everyone to feel a part of the community.

“The team and all the captains are so welcoming, and being a part of an environment where you can be yourself around all kinds of students is really nice,” freshman runner Emily Wedlake said.

Furthermore, during the DCL’s Invitational Meet, the team holds one of the most memorable team traditions for runners – Buttercup. Once the team gets back to WA from the race, the boys’ bus typically arrives before the girls’ bus. The boys will get off their bus and kneel in front of the girls bus singing “Build Me Up Buttercup” by The Foundations.

This longtime tradition originated from a WA cross country runner proposing to a girl to prom who also ran cross country. This dated so far back that even this year’s senior captains don’t remember a year without Buttercup.

While many of the team’s key runners from last season have graduated and gone to race at the collegiate level, the senior athletes continue the fun traditions of team spirit for meets and efforts to create a sense of unity, being crucial for their success.

“Our team is made up of students who love running or just need something to do after school,” Walpole said. “But we’re all here to have fun and be part of a team. So even though meets can be tedious, our team makes sure to show up for practice and Spags, and push other runners to do their best.”

Many consider cross country to be an individual sport – the activity that requires a specific type of mentality – however, the team’s culture provides opportunities for bonding.

“It’s definitely very difficult to run alone and enjoy it,” DeSisto said. “When you’re running, you actually want to take your focus off the fact that you’re running. So you end up talking with the group you run with and learn a lot about them, enabling the ability to get to know the people you’re practicing with.”

Even the most common team routines allow for everyone to connect at times on a more personal level.

“One kid told me that his favorite part of practice was stretching with the entire team because we would talk about our days and have fun, random conversations that helped with getting acquainted with everyone and overall team bonding,” Douglas said.

While the season has yet to officially begin, many runners are already eager for the Invitational Meets. These races require a special invite from either the coach or the league. Meets such as the Ocean State Invitational, Bay State Invitational, DCL’s, and the Coach’s Invitational are just a few of the runner’s favorite parts about the season. The competitions usually include around 200 students in which WA has placed in past years.

“This season, I’m most looking forward to all the meets. I’m really excited for all the miles people have run over the summer to visibly pay off,” junior runner Meaghan Lu said.

Overall, the team is thrilled to see what the season has in store for them and will take it one race at a time. But in the words of Ottesen, the season can be described in four words: “We’re ready to win.”