April Collamore awarded salutatorian for the class of 2022 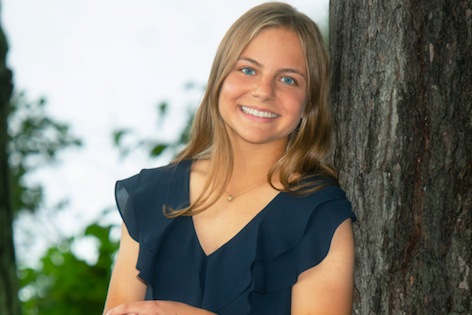 High school is an undeniably challenging time for many students, with its fast-paced curriculum, intense competition, and pressure to get into college. Oftentimes students find themselves losing track of what really matters: their happiness and sense of personal accomplishment. For class of 2022 salutatorian April Collamore, her strong support system, commitment to softball, and studious attitude were what allowed her to flourish, paving the way for an exciting future.

Ever since the beginning of high school, achieving high grades has always been a priority for Collamore. During her freshman year of high school she took orchestra as an elective, a pass or fail class, in order to focus on doing well in her core classes. By taking all honors classes freshman year she was able to gain a solid foundation which helped later on, when she took an array of Advanced Placement classes, including Statistics, U.S. History, English Literature & Composition, Chemistry, Biology, Physics, Calculus BC, and Spanish.

“[The] goal [for me] was never salutatorian or valedictorian. [The AP classes I took] were a combination of I knew they would help my GPA but I also wanted to go for the challenging courses,” Collamore said. “Often the [AP] environment is where everybody really wants to do well which helps people individually and then they work together to help each other which makes [getting through the classes a lot easier].”

Among the classes she took at WA, the one that inspired her the most was AP Physics. According to Collamore, the material as well as the problem-solving aspect of the class was what made this subject her favorite, combined with the encouraging teacher, Sagar Shah.

When it comes to her performance in the class, Shah only has good things to say, noting her positive energy and curiosity, as well as her willingness to help others.

“The one word I would use [to describe] April is dedicated. She really wants to do good and the effort comes naturally. She’s very curious [and] very humble; when her friends don’t understand [something yet] she goes and without asking tries to help out,” Shah said.

In addition to physics, Collamore also took other STEM oriented classes in order to pursue biomedical engineering at Cornell University, a branch of science which she has been especially interested in amidst COVID-19. Although that interest sparked long before the pandemic, COVID-19 served as both a confirmation and a guide to the potential sub-specialties she would like to follow.

“One of the reasons I really like Cornell [is because] they have a whole department for [biomedical engineering with] different concentrations you can take,” Collamore said. “But the angle I was more interested in was medicine, drug development, or vaccine development. I’ve always liked more of the research idea of [medicine] rather that working with people as a physician.”

Her dedication to the sciences and passion for biomedical engineering payed off when she got accepted into Cornell University during the early decision process. According to Collamore, Cornell always had a special place in her heart, given her family’s deep history with the college and her own personal connection to it.

“When I went to [Cornell’s] campus with my family, my dad [and my uncle] who went there, walking me around, I just loved it. Especially the biomedical engineering building. Walking through the hallways [and seeing students]. I couldn’t put it into words before but [I just thought] whatever those kids are doing [I want to do that too],” Collamore said.

While deciding on the college she wanted to go to, Collamore also considered playing softball on a college recreational team, a sport which she has been committed to all throughout high school. Ultimately she decided against it, as not to add more stress onto her busy college schedule. Nonetheless, softball has left a lasting impact on Collamore, who served as captain of both the varsity and club teams.

“[My team] is like a second family to me. […] We have spirit days and spags and practices or a game every day. It’s just awesome to have another group of people to get to know and have fun with who’s completely separate from all the people I have classes with,” Collamore said.

According to Collamore’s softball coach Gina Mustoe, Collamore is a remarkable captain and player who supports her teammates through setbacks and is always focused on the game. Her hits and dives for the ball are superb, so much so that she had her pictures posted on the Boston Globe instagram, portraying one of her incredible saves. She was also chosen as an All-Star for the Dual County League junior year.

“April leads by example. She’s very positive and encouraging to the girls. I know that the girls have no problem expressing concerns to her [because] they know she is going to listen and hear them out,” Mustoe said. “What strikes me [about her] as a person is even though she’s taken on these huge challenges and has a significant amount of homework, she has really good friends and balance in her life.”

To be sure, Collamore always had her friends to turn to for help, whether it be working on a freshman biology project or tackling difficult calculus concepts. The close bonds she formed with her classmates provided her with unconditional support and reassurance that made high school not only manageable, but also enjoyable.

Although Collamore will miss her friends from high school, she is excited to meet new people and pursue her passion for the biomedical field at Cornell.

“I hope to do well there and meet a bunch of people. I’m a little nervous considering [I won’t be with] my friends [from] this year [especially with the] build up to [graduation]. So I’m nervous about meeting new people but I want to get to know them soon,” Collamore said.