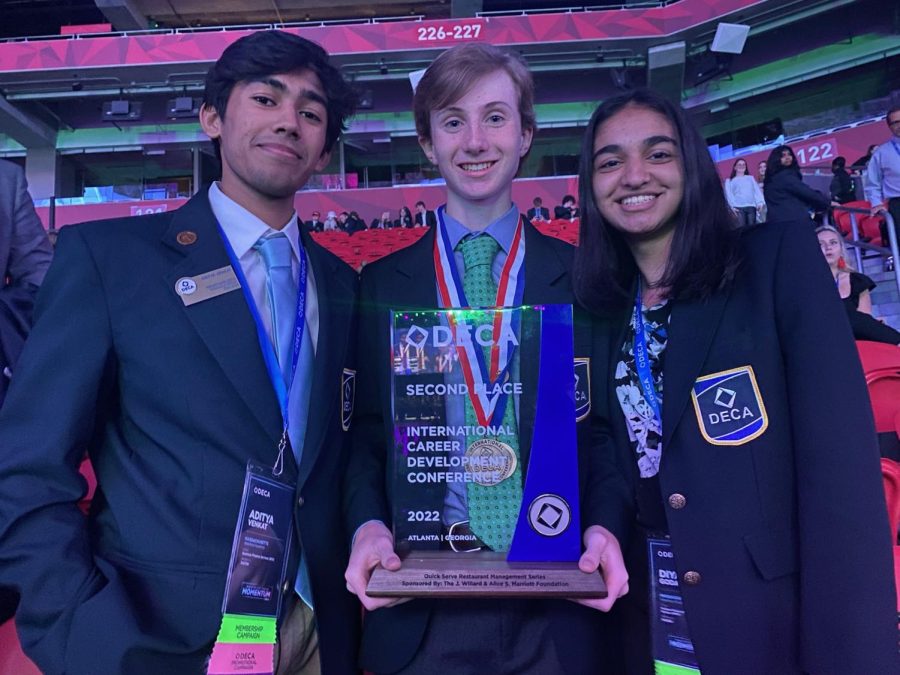 The first moment where an award is won, a person would expect the recipient to be crying, smiling, laughing, showing joy on their face. However, this specific moment is different. When junior Landon Chwalek first heard his name announced for his award, he was in utter shock. He couldn’t believe at first that he had actually placed, and his face was as stiff as a board with no emotion. This particular award that Chwalek won was the coveted DECA glass for the first time in five years at the International Career Development Conference(ICDC).

Chwalek was awarded second place in the international competition in Quick Serve Restaurant Management (QRSM), which is a speaking event. Chwalek and other competitors were given a roleplay scenario, where they have ten minutes to prepare and ten minutes to present to the judge. The roleplay scenario is generally about managing the business involved in restaurants and conducting sales pitches.

DECA is one of the most popular clubs in WA, with over 300 members. This year, 42 students from WA made it all the way to ICDC.  Chwaleks’ win was the first glass trophy for Westford since 2017.

In total, there were 14,000 finalists from 52 different chartered associations competing in the events. There was also a leadership development program which 1,000 people participated in. Various college and business exhibitors were also present keeping an eye on the future workforce.

When Chwalek attended the DECA orientation in his freshman year, he immediately fell in love with the club ambience and what the club really stands for. He knew that this was the place where he belonged.

“Out of all the club orientations I went to, DECA was easily the most welcoming and the people were extremely personable and amiable. I definitely felt at home right away, and I really knew I was going to join from the moment I went to the orientation,” Chwalek said.

Chwaleks’ interest in business really blossomed during his time in the club due to the supportive environment and people.

The club itself has training classes on Tuesdays, Wednesdays, and Thursdays where students start off with the basics of business and eventually end up with mock role plays to prepare for the actual event. Chwalek continuously participated in the club and prepared for the competition thinking about the various different skills he would need to compete.

“So I think that one of the most underappreciated aspects of competing has to be interpersonal skills,” Chwalek said. “I tried to focus on improving my speaking abilities more than anything else. […] I think just talking with my peers in a professional manner on a daily basis has definitely helped me out and just using demonstrative hand gestures.”

Chwalek also mentioned that during the actual competition, stress levels were extremely high and everyone was very nervous. However, he believes that anyone can win, as long as they work hard for it.

“I’m a big believer in just being confident in yourself regardless of the circumstances. I don’t think that confidence is innate. I think it’s something that has to be learned,” Chwalek said. “If you are going to believe in anything, you might as well believe in yourself. I definitely think believing in myself has helped me stay calm and collected along the way.”

Chwalek also said that the dozens of relationships he has built at this competition will last beyond high school. Seeing how much support he got after winning was the best feeling in the world for him and he hopes to give the same confidence and support to other members next year.

However, he stresses that his work is not yet complete, and he acknowledges that there is still a lot to learn in business. One thing he thinks he can improve upon is to learn more about his performance indicators.

“We had a great group at ICDC in Atlanta, and a lot of young kids. I hope that other kids next year, take the experience from them and run with it, and do all the things that we offer. We offer more than any other DECA club and that’s why we are at this level. They should take advantage of it because anyone can be successful,” Rogers said.

Chwalek also wants to thank everyone who has helped him along the way, especially DECA advisor John Rogers, Massachusetts state officer Aditya Venkat, DECA club co-presidents Diya Godavarti and Emily Carey, and his family who has supported him along the way.

“My main goal would have to be just passing the torch because next year I’m going to be a senior. I think that just being able to instill a sense of hope in the incoming freshmen that they are going to be able to do what I’m doing,” Chwalek said. “I really hope that it inspires them and makes them passionate about business.”