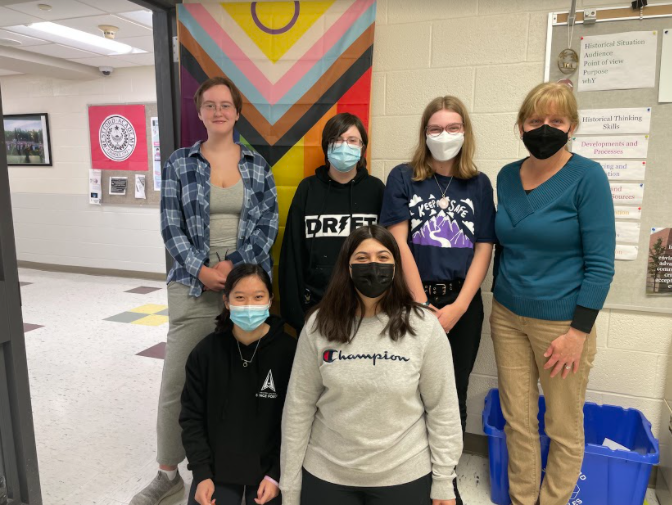 As the year comes to an end, clubs put together their final events and elect new leadership. The Gender and Sexuality Alliance (GSA) club is doing just that.

As a result of these elections, the new co-presidents are junior Elena Gibbons and freshman Lara Rodriguez, sophomore Clem Bower as the new secretary, and freshman Elena Wu as the new treasurer.

Gibbons is a junior and was the president of the GSA this past year. She has been in the club since her freshman year.

“We have two main goals: we want to provide a safe space for any queer students in the school to come to, and know that they can use their correct name and pronouns,” Gibbons said. “We have a strict no outing policy, because we want people to have the peace of mind to come to the club meeting without possibly putting themself at risk.”

Gibbons wants queer students who are struggling with their gender or sexuality to know that they do not have to put a label on their identity. She also recommends being surrounded by people who are accepting and respect everyone’s pronouns.

Rodriguez would like to see more queer representation, as there is a severe lack of LGBTQIA+ representation in the American education system.

“I want to expand the health curriculum to include information on non-binary, transgender, and intersex people and more information on same gender sex,” Rodriguez said. “The English curriculum should include either a book by a queer author, or one clearly featuring out queer characters. Queer history is history, and should be included as well.”

Much like Gibbons, Bower hopes to create a safe space, as well as hosting more events in hopes to increase attendance. He hopes everyone knows that even if they are not part of LGBTQIA+ community, they can still join the club; simply being an ally can create a massive difference.

Bower has experience with the difficulty of coming to terms with gender and sexuality, and hopes to share his experience to let people know that they are not alone.

“As a trans man who struggles daily with gender dysphoria, I know how hard it is to feel like you belong when you’re questioning, especially gender identity,” Bower said. “Accepting yourself and the fact that you aren’t who you thought you were is one of the hardest things out there, so just know that you are not alone in how you are feeling.”

He recommends asking questions, exploring different options, and never feeling pressured to put a label on your identity or whom you have feelings for.

Wu feels the same way as Bower in terms of expression of identity.

“Being in the LGBTQ+ community is not something to be ashamed of. It is a part of our identity if we so choose, and we should be proud of who we are,” Wu said. “To deal with any stigma, we will do whatever it takes to keep ourselves safe, and distance ourselves from anyone who would not accept us for who we are.”

Wu hopes to grow the club and raise money to donate to charities or use for the club’s events.

The club’s next event is the Day of Silence on May 25, 2022. This Day of Silence is in honor and solidarity of LGBTQIA+ individuals that face discrimination in their community.

“On day of silence we stay silent for the course of the school day as a way to recognize members of the LGBTQ+ community that may not have a voice, and in general to raise awareness about issues that queer people may face,” Gibbons said.