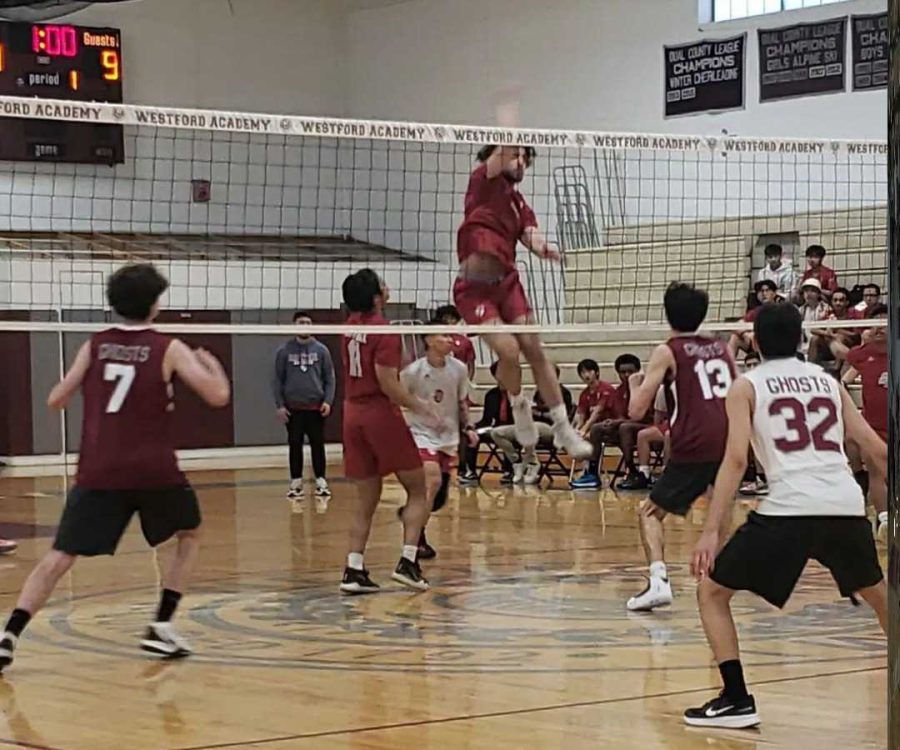 A Lowell player spikes the ball as the WA team prepares to return.

The spring sports season has started, and WA Boys’ volleyball  are setting up for an promising season. The WA boys volleyball team is ready to make a run at a second consecutive DCL championship, and then get further than last season at states.

Led by Coach Brandon Eang, the boys team finished last season with a win in the Division 1 North State Championship and the DCL Cup, and were named Co-DCL Champions. They may have lost in the semifinals of the state championship to Needham, but that shouldn’t take away from a very successful season.

Coach Eang is well liked by the players on the team. He pushed the team to keep going throughout last season, and to not get overconfident as the wins and different titles kept on coming. With the loss to Needham in the semifinals of the state championship last year, the team has more desire than ever to progress further than the semifinals.

“Mr. Eang pushed us to compete with the best teams in the state, and we won our way all the way to the state semifinals [last season],” Senior Captain Matthew Zegowitz said.

Confident, but not overconfident, the team will work hard, and together to meet their goals for this season.

“The main goals for this season is to win the DCL again and then make a strong push at the state championship,” Senior Captain Jake Aylward said. “We played well in the preseason scrimmages and we look to take that momentum into the season.”

Alyward does admit, however, that the road to a second consecutive DCL championship will not be easy.

“The strength of the DCL league makes every game a tough competition,” Aylward said.

Coach Eang agrees that the road will be tough, but knows that the team will be able to perform to their maximum capability.

“Our team’s biggest challenge is as always, to play well together, consistently, at a high level,” Eang said.”We hope to be competitive in every game we play, and go deep into the postseason.”

Many of the teams starters from last season have now graduated and are no longer with the team. This opens up space for the younger, more inexperienced players who haven’t played as much at the high school level.

“We lost a few major players from last year, and if the younger players are able to step up and fill the few gaps, then we will be even better then we were last year,” Zegowitz said.

Optimistic is the key word to describe the upcoming new players joining the team this year. The team hopes that these players will be able to step up, and then become future stars for the team.

“The biggest challenge this year will be working with the players who are new to the sport [and] build up their confidence to become a reliable and core member of the team,” Zegowitz said. “I know that we will be able to do it.”