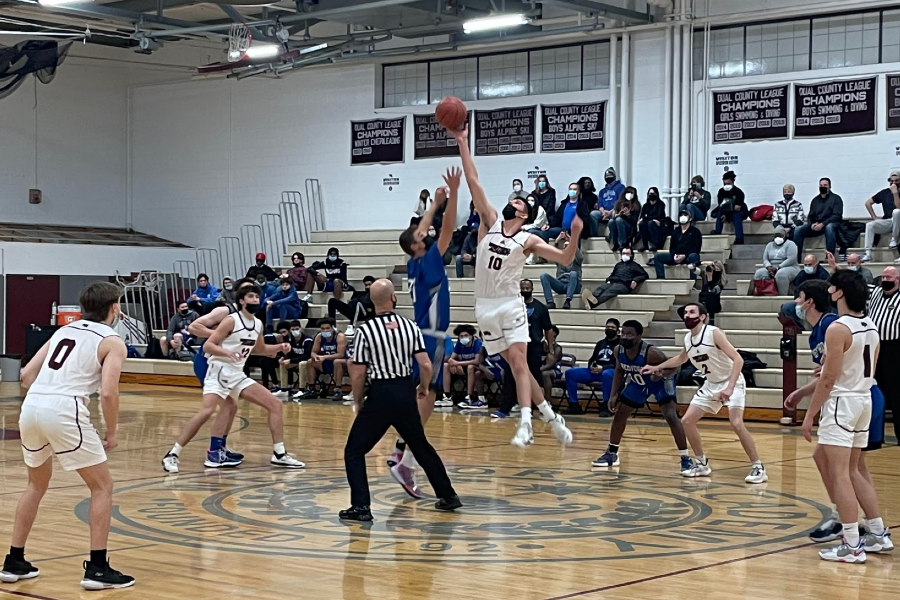 Senior captain Griffin Eddy makes a move for the ball at the beginning of the game.

WA Boys’ Varsity Basketball won their first home game of the new year against Bedford on Tuesday, Jan. 4, with a score of 58-54.

WA gained an impressive lead in the first quarter, with the first points of the game being scored by senior captain Griffin Eddy. The pace picked up as WA scored point after point, with an early lead of 8-0 in the quarter.

Bedford gained on WA, bringing the score to 8-4. A two-pointer by senior captain William Bramanti put a stop to Bedford’s advancement. The first quarter ended with a score of 12-5, with a solid seven-point lead for WA.

Senior Rohun Voruganti added onto WA’s lead with a two-pointer, the first points of the second quarter. Bedford chipped away at the gap, bringing the score to 14-11 when WA called its first timeout with four-odd minutes left in the quarter.

WA begun losing some of its momentum when Bedford scored 9 points, with WA maintaining a slim lead. However, they bounced back quickly.

With a shot from Krikorian, WA tied the score with Bedford 20-20. Then, with seconds to spare, senior captain Ethan Ewing made the final shot of the second quarter to bring the lead back to WA, ending the first half with a score of 23-20.

After halftime, Ewing again scored the first points of the quarter with a two-pointer. WA started picking up the slack, bringing the score to 29-22 with a two-pointer by Krikorian, resulting in a Bedford timeout. Finally, the third quarter ended with WA hanging on by four points, 37-33.

The score was neck and neck in the fourth quarter. WA and Bedford kept one-upping each other, both scoring points up until the last seconds of the game. WA held onto the lead with just a couple of points, bringing the score to 55-54.

With less than four seconds to spare in the fourth quarter, Bedford called two consecutive timeouts when the score was 56-54. WA broke away from Bedford and scored two points with seconds left on the clock, bringing the score to 58-54 just as the buzzer rang.

“A lot of people picked Bedford to win this league, so that was a big, big win for us [since] they are a good team, well-coached, and resilient. We were resilient as well, and every time they made a run, we held our ground. We did what we needed to win this game, so I’m super proud of these guys,” head coach Chris Bramanti said.

WA’s next game is home against Cambridge Rindge & Latin on Tuesday, Jan. 11.