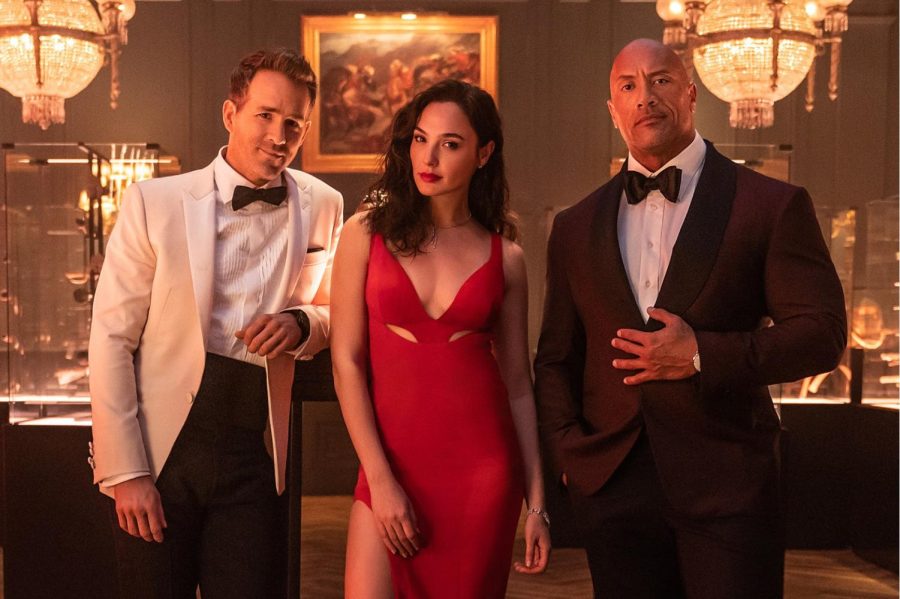 In this action-comedy, Johnson, playing FBI agent John Hartley, takes on a mission to find a missing golden egg, once owned by Cleopatra. Later on, we meet Nolan Booth, an art thief played by Ryan Reynolds, at a famous museum trying to steal an egg. Then, we meet The Bishop, played by Gal Gadot. After she disguises herself as an agent in Bali, she takes the real egg and plants another fake.

The eggs are significant because Ancient Roman general Mark Antony had given them to Cleopatra as a gift. After they both committed suicide, the priceless golden eggs were scattered. One was given to the Museo Nazionale, one to a private collector, and the final one was lost. An Egyptian billionaire wants the eggs for his daughter’s wedding and is willing to pay big bucks for them. This causes the high demand for them, prompting people like Booth, Bishop, and Hartley to hunt for them.

One of the biggest flaws of this movie is the lack of connection the characters make with the audience. The most we learn about any of their backstories is that they had rough childhoods, a concept that has become overused in today’s cinema and television shows. It seems every villain uses parental problems as an excuse. The only time the characters even bond with each other is when Hartley and Booth talk about their fathers and how they wanted to be the opposites of them.

Even the screenwriting itself was trite. Most of the time, I felt like I could predict the next thing that was going to happen. I hate to break it to you, Netflix, but you aren’t surprising the audience.

The characters also lack depth. Even when The Bishop and Hartley share an intimate dance, I can never tell how Hartley is feeling. Throughout the whole motion picture, The Rock doesn’t bring his full arsenal of talent to the role and shows little emotion. Reynolds acts like he is getting sick of playing roles that make sarcastic jokes and always have a quick quip for everything. There is nothing really to be said about Gal Gadot. It also seems like she is playing her role for the money and not anything else. Her character is missing personalization, and it is as if the Bishop could have been played by anyone else.

Overall, this movie was a big cliché, copying movies like “Indiana Jones” and any other film focused on the hunt for treasure. It is filled with double crossings and lackluster acting. I recommend this movie to people who aren’t super invested in what they are watching and might need something to use as background noise. These actors have had way better performances, and “Red Notice” will be one of the worst movies in their respective careers.