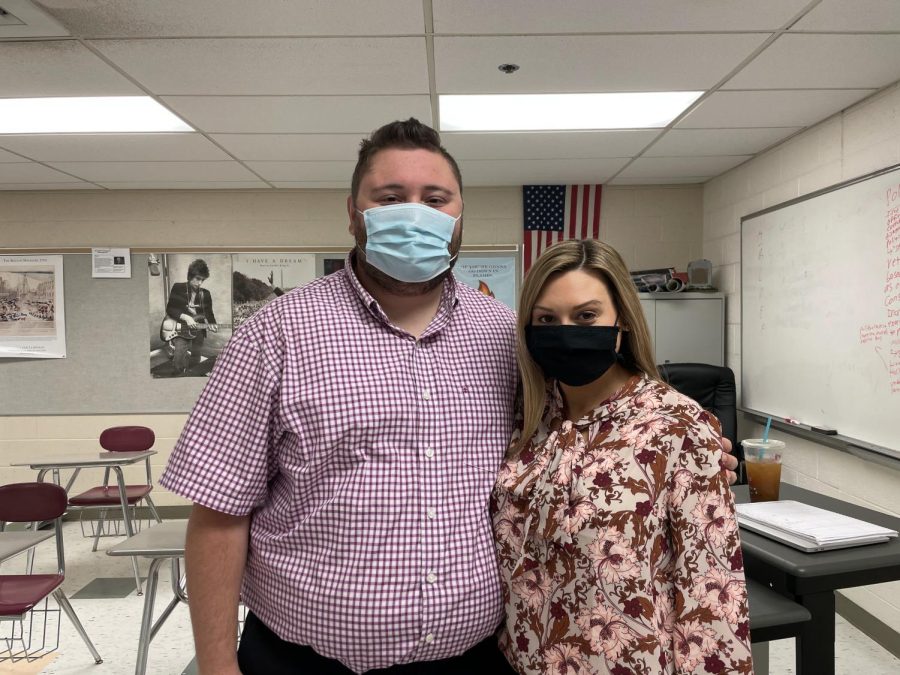 Anthony Brown and Kimberly Sears smile for the camera.

The coming and going of teachers is a normal part of school life at WA. Students are no stranger to long-term stand-ins or substitutes, but the transition is always bittersweet.

One such experience has happened very recently. On Nov. 22, history teacher Kimberly Sears came back from maternity leave, which meant that her long-term substitute Anthony Brown was no longer needed.

Brown and Sears both taught together for the half-week before Thanksgiving break in order to ease the transition between teachers for the students. After the break was over, Sears alone taught her classes.

“It’s really just kind of figuring out where we are content/curriculum wise, where the students are at, and just trying to figure out what [Brown and I] can do to make things easier on [the students],” Sears said.

Brown also said he was working closely with Sears to ensure the transition went smoothly and the students are in a good place after he has left.

Both teachers have a love of history, stemming from when they were children.

“I used to read historical fiction. When I was little it was actually American Girl Doll books. […] Also, both my grandfathers served in World War Two. They had a lot of stories, and I would sit with them […] and be listening to their stories,” Sears said.

Further, Brown would research historical events on his own when he was younger. When he went off to college, he greatly enjoyed his first college-level history class.

While doing his undergraduate, Brown realized that he wanted to teach history rather than go into other parts of the history field.

“It took me about half a semester to realize that I actually wanted to teach history when I was in college. I actually first came to Merrimack as a Criminology major. Then I took an education class just to cover some requirements, and I really enjoyed it,” Brown said.

Sears also wanted to work in a museum when she was younger, but then as she was getting her history degree, realized that she wanted to teach history. She wants to spark the love of history she has in other students, and teach them that history can be fun. This led Sears into finishing her degree and coming to teach at WA.

Sears is excited to be able to see familiar faces again upon her return.

“It feels really good [to be back in the building]. I missed everybody. I missed seeing my former students, my colleagues, and all of the rest of the staff here. It’s been really nice to get back into the swing of things and see everybody,” Sears said.

In addition, Sears feels that the students in her classes will not be behind, even though there was a switch between teachers. She is confident that she can meet the students where they are currently in terms of curriculum.

Brown feels a bit conflicted about leaving Westford Academy but is thankful that he is still working in the school district, specifically at Blanchard Middle School.

“It’s bittersweet. I’ve been here for the past year and a half, and it’s been an awesome experience. I love being here, and I don’t view this as a job, because this is fun for me. The students are awesome. So it’s bittersweet for me in that sense, but I am also excited to see what teaching in another school in the district is [like],” Brown said.