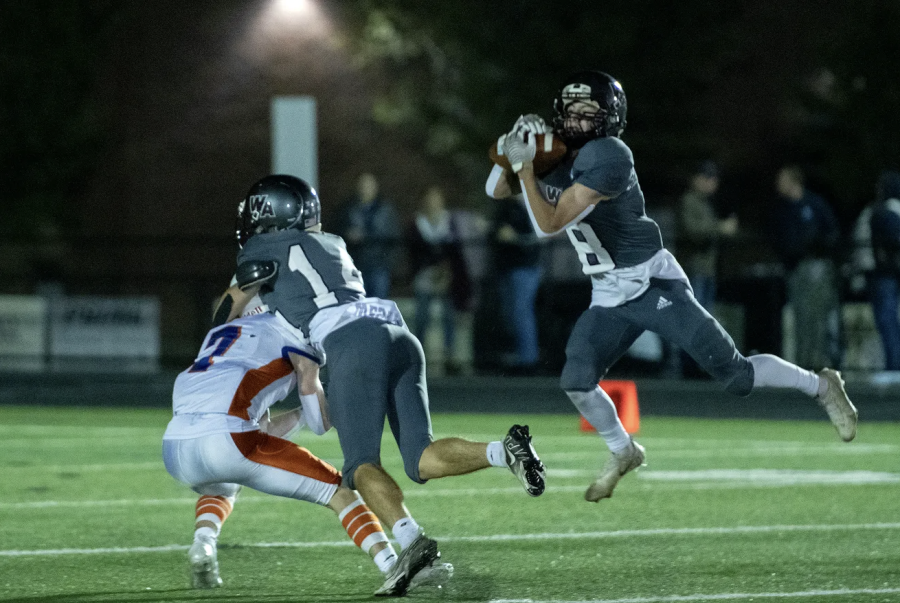 Westford Academy defeated Newton South 29-0 on Friday night at Trustees Field to advance to a record of 4-1 on the season. WA dominated all aspects of the game from start to finish, including four touchdowns, stifling defense, and key special teams play.

WA got off to an impressive start, securing a significant lead from the beginning itself. Soon into the first quarter, running back Anthony Rudiman secured a touchdown for the team, catapulting Westford to the lead. Fueled by the early advantage, WA also balanced a strong defense with Ryan Jacobsmeier leading the way on the defensive end in front of an animated WA crowd. As Newton gained a first end ten from the 20 yard line, Westford’s Jacobsmeier tackled Newton on the carry, preventing them from scoring points. The quarter ended with Westford in the lead, 7- 0.

The second quarter, however, was off to a slower start. Newton South put up a good fight in the first half, recovering some of WA’s forced fumbles, but Rudiman continued to make good plays as running back. The Ghosts had some incomplete passes, but there was a turning point after five minutes on the clock as Westford gained momentum and made it difficult for its opponent to score any points. Leaving very little breathing room for Newton South’s offense, WA shut down their opponent’s offense drive after drive.

Around the seven minute mark, Westford had a key 92 yard punt return touchdown by junior Luke Fremault, putting Westford up 15-0.

“It felt great to return the punt and help the team earn those points in anyway to help the team get the win on Friday nights. Punt return is a job I have and the game isn’t just offense and defense special teams is a huge part of the game,” Fremault said.

Newton South tried to step up its offensive game seeing WA’s continual dominance of the line of scrimmage, but as the opponent team attempted an advance, the ball was intercepted by Jacobsmeier. Newton South fell short in its defense as well; the team was was able to bring down Rudiman on one of his carries, but Westford returned the favor as captain Cole Stickel also brought down a Newton South player.

Soon with just 30 seconds left on the first half clock, Westford’s Alex Wilson broke up a pass Newton attempted. Even when Newton executed a divisive play moments after, Junior Drew Wilson recovered a fumble on the 15 yard line, ending the first half in a dominant lead of 15-0.

“I think our punt return touchdown or any of the turnovers we forced on defense were our best moments last night,” Captain Cole Stickel said.

Leaving the crowds in an uproar during halftime, the third quarter commenced with the same vigor, with impressive tackles by Wilson and Captain James Decelles. Although no points were scored, Westford maintained its 15 point lead and ushered itself to victory in the fourth quarter.

In the final minutes of the game, WA’s Nick Russo soon completed a touchdown, putting the team up 22-0. Coupled with a second touchdown by Rudiman, The Ghosts secured a lead of 29-0, ending the game with a triumphant win.

Especially with many new players on the team, Captain Damien DiGiovine believes as though the unity and fervent efforts of the team last night aided in its success on the field.

“It was important this week with so many starters out to make sure that the players filling in for them knew all the plays and assignments. The new starters in those positions really stepped up and helped us get the win,” DiGiovine said.

Overall, Head Coach Bruce Rich believes the key is to keep it simple and have confidence in the team’s abilities.

“We got great at what we do. We kept it simple,” Rich said.

Next week, Westford Academy will look to play 5-1 against Lincoln-Sudbury on the opponent’s turf.