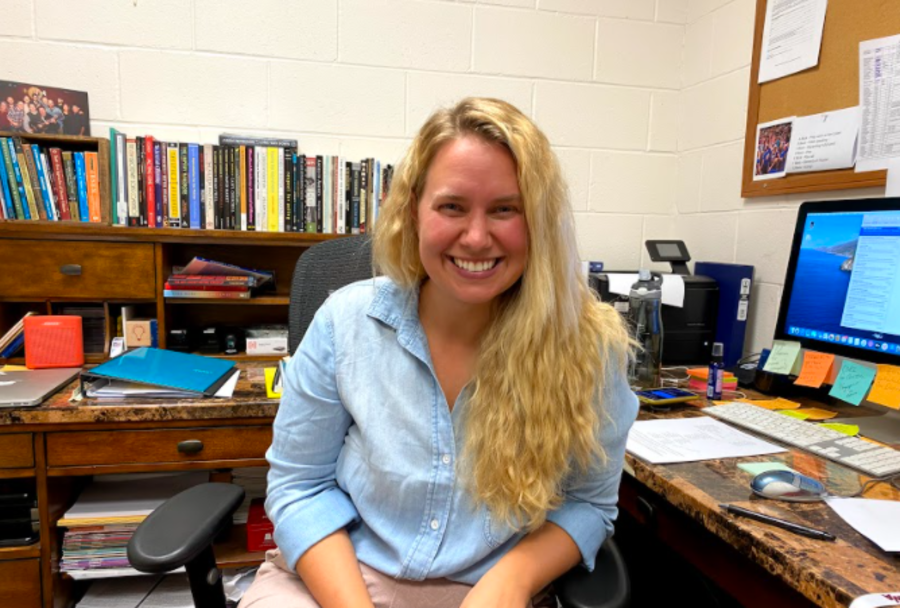 From playwriting to directing and even to acting, Maggie Sulka has done it all. Towards the end of the 2021 school year, Westford Academy Artistic Director Michael Towers announced his temporary leave of absence. Many were worried about what would happen to the annual WATA plays and theatre classes Towers once taught, however, this year Westford Academy welcomed the new interim Theatre Arts Director Maggie Sulka.

Westford Academy is one of the top public high schools in Massachusetts. It is known for its academic excellence, its wide range of extra-curriculars, and last but not least, its award-winning theatre program, Westford Academy Theatre Arts (WATA).

While WATA has helped inspired Sulka’s truest passion for theatre, she has not forgotten where she came from as a WA alumna.

This is Sulka’s first year of teaching full-time but she has been helping out at different schools for three to four years. She will be teaching Elements of Theatre, Acting I, Directing I, Playwriting, Play Lab, and Public Speaking.

Sulka always had the desire to pursue a career in the arts. When she moved to Westford for her freshman year of high school, she became a devoted member of WATA. In later years, she was WATA Board President and participated in all of the theatre productions during her time at WA such as “Dancing at Lughnasa” and her personal favorite, “Angels in America”.

“My father was a colonel in the army so we moved around a bunch… and I first stepped on the stage in eighth grade. And my father was looking for where we could move to next after he retired and also made sure that I was able to be part of a really great theatre department,” Sulka said.

While Sulka’s dream of an artist has become a success, her introduction to WATA was one she’ll never forget.

“It was the first day of school and auditions [for the annual spring musical] were that night… My mother had brought me and I had no idea. I completely forgot my monologue and song once I stepped in front of Mr. Towers and started crying,” Sulka said.

Towers started to comfort her by trying to distract her from the audition. Little did she know her nervousness would lead her to lifelong friends.

“He [Towers] brought me up closer to the audition table and shook my hand. He introduced me to the seniors sitting next to him and through that, I found other people that I wanted to hang out with,” Sulka said.

In 2009, Sulka graduated from Westford Academy and continued to study her passion for theatre at the University of Connecticut where she earned her Bachelor of Fine Arts with a concentration in acting.

After college, Sulka worked as an assistant and regional director at a theatre company called City Theatre in Pittsburgh, PA where they produced new plays. Along with that, she also worked with the director of education and accessibility for the Young Playwrights Program. She would go to different public high schools and middle schools in the Pittsburgh area to teach theatre classes.

During the summer, Sulka would travel back home and assist with Westford’s Summer School of Performing Arts Program (SSPA). This summer, she directed Shakespeare during the program.

“As an actor and a director, I kept coming back to education and working with young people. And thinking about the arts is not just a form of entertainment but also a way to connect with one another, and the best way to do that is to teach early,” Sulka said.

All throughout her career, she has worked with kids ranging from three to eighteen years old. Sulka believes that great teachers make great people through the art of theatre.

“It [theatre] is something that kept drawing me back not only as a theatre artist but to help make young people compassionate and empathetic who are effective communicators,” Sulka said.

Sulka is currently working for the upcoming annual spring musical — Spongebob the Musical.

“It [Spongebob the Musical] is going to bring a lot of happiness and joy to a lot of people. Even though it’ll make people laugh, it will also have a lot of heart and at its core, it is about finding your voice and how you can contribute to a community,” Sulka said.

Sulka believes that theatre is a way for anyone of any age to be their true self. Theatre is an outlet for true expression even when playing a different persona on stage.

“Everybody’s favorite person should be themselves. That’s the person everyone should be working to pump up… you should be your biggest cheerleader. And what I try to do is to instill this into my students—reminding students that people are lucky to have them in their lives,” Sulka said.