An update on the Grey Ghost 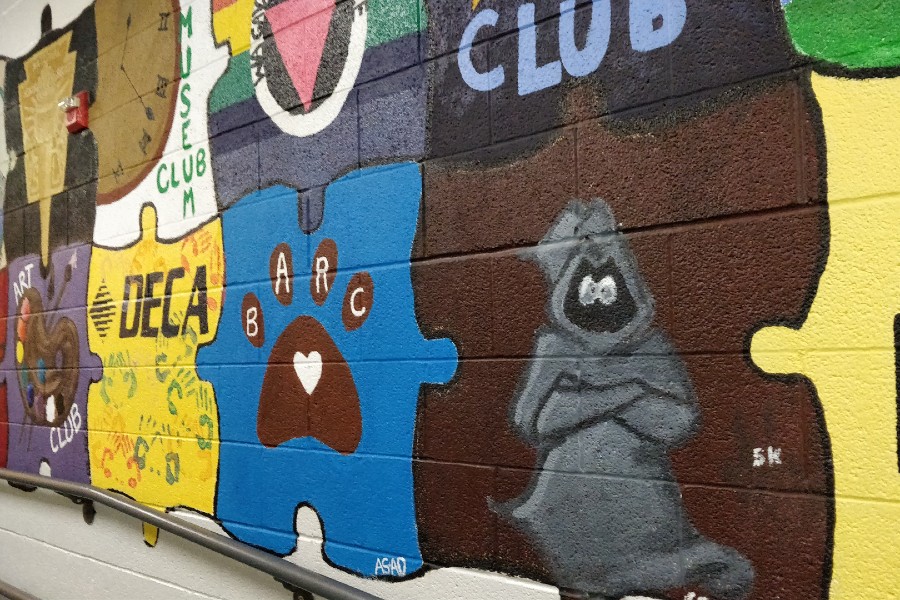 The Grey Ghost painting that is part of the mural that is on the wall that leads to the cafeteria. If the mascot image is changed, the mural may need to be painted over.

After a year-long discussion regarding the WA mascot (the Grey Ghost), the school committee, Principal Jim Antonelli, and Superintendent Christopher Chew are turning to the WPS DEI (Diversity, Equity, and Inclusion) team and WA’s students.

“Students at WA have engaged in very thoughtful discussions with Mr. Antonelli and Dean [Betsy] Murphy […] I really appreciate all of the time and work that has been invested already,” Chew said.

According to Chew, he and the school committee will continue discussion with the DEI team, which includes representatives from each school in Westford and members of the Westford community as well. The DEI team will provide guidance and support, as well as gather information from all of WPS about the mascot issue.

“While there may be a lack of clarity around the true origin of the mascot, there is no ambiguity that Westford Public Schools must be a welcoming place for all students and families. And if our mascot is preventing students from feeling like this is their school district or their community, then we obviously have more work to do,” a written statement released by Chew and school committee co-chair Chris Sanders said.

“I actually had a student […] who’s in eighth grade send me an image of what she thought the ghost should look like,” Antonelli said. “[The student] said, ‘I know that I’m not in high school yet but I will be there next year.’ I love that idea. Why not allow middle schoolers to get involved with this too?”

Chew agrees with this perspective.

“Understanding the perspective of future WA students now at the middle school level will also be considered to help frame the impact any decisions in the future might have,” Chew said.

According to Antonelli, the costs of a new mascot design would be inexpensive.

“There’s not a lot of the actual logo [that is] on athletic apparel. [Most of] it just says “Grey Ghosts” [or has the WA seal on it],” Antonelli said. Indeed, only a small portion of sports uniforms, including the Girls’ Tennis uniforms, have pictures or depictions of the current Grey Ghost on them.

Any WA apparel available at the school store will be sold and gradually filtered out.  New products, such as shirts and hoodies, will be bought by the school with the new logo to be sold.

“We [will] buy new stuff to move forward, so there would be some expense, but it would not be immediate,” Antonelli said.

Driven by a need for everyone to feel included and comfortable, the school committee, along with Chew and Antonelli, will strive to find an acceptable option for everyone.

“Self-reflection and a drive for self-improvement are hallmarks of both good educators and good students. In that spirit, the school committee and the superintendent are committed to listening to the full range of diverse voices in our community, and to ensuring that we are creating a culture of belonging for all students and families in Westford,” the statement said.