‘Afterlife of the Party’ is definitely a party 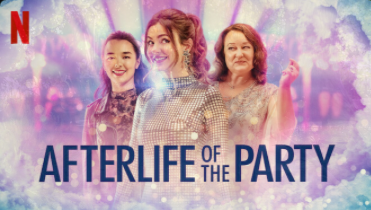 Victoria Justice stars in Afterlife of the Party.

The movie Afterlife of the Party stars Victoria Justice as Cassie and Midori Francis as Lisa. This PG family-friendly movie was released on Sept. 2, 2021, on Netflix. This movie is definitely an amazing and easy movie to watch on the weekends with friends and/or family. This movie brings back the fan-favorite Victoria Justice, who is known for her part in the 2010 sitcom VICTORiOUS but now has made a brand new name for herself by starring in the Afterlife of the Party.

This movie follows Cassie, (Victoria Justice) a huge party girl, celebrating her birthday week, known in the movie as Cassie-Palooza. However, she grows distant from her best friend Lisa (Midori Francis). Cassie and Lisa get into a fight that night, and Cassie leaves to continue partying while Lisa goes back to the apartment that they share. In the morning, Cassie dies when she stumbles and hits her head on the toilet when she is trying to clean up because of a hangover. She wakes up in the In-Between, a place where dead souls get a list of people they have to give closure to, and then only can they ascend to the Above, or fall to the Below. The rest of the movie follows Cassie as she tries to complete her list.

The movie resembles the fairytales of guardian angels, but with a few modern twists. For example, Cassie’s temporary guardian angel, Val (Robyn Scott), does not have wings or a halo. Cassie and Val can both teleport by snapping their fingers, but only Cassie can affect the physical world and be seen by Lisa because she has a spiritual connection with Lisa. These modern twists make the movie a little more relatable to younger generations.

Cassie also is portrayed as a fearless young woman, but her vulnerability is shown when we learn that she was raised by her dad. This shows a side of the character that some people can relate to and strengthens the connection between the audience and the character. At certain points of the movie, such as when Cassie says goodbye to her family for the last time before she leaves Earth, I was in tears.

The second lead, Lisa, does not show her grief about her best friend’s death until Cassie pushes her to spill everything. This is relatable because she was carrying the guilt of the argument and hiding her grief inside, not talking until she was forced to. This was one of the things that really stood out to me in the movie, in a good way, but there were also things that stood out in a not-so-good way.

One thing that I did not like about this movie is how it went a little fast at the beginning. Primarily, it is not shown enough that Lisa and Cassie are very close friends, so the scene that they fight near the beginning makes it feel like they were not that close. I felt that the portrayal of the friendship between them was rushed at the beginning of the movie. If the relationship had been shown in a better way, I would have been hooked more easily.

In addition, something that I did not like about this movie is that in general, it felt a little bit cramped. The movie is only one hour and 49 minutes long, but it felt like a lot of plot is crammed into it. After I finished watching it, I felt as if I watched the same amount of information that is in a two-hour movie in a little lesser time. Everything felt like it happened a teensy bit too fast. However, it does make a little sense because this movie is meant for younger audiences who might pay attention more to slightly more fast-paced movies.

This is a pretty light and easy movie to watch if you are stressed out and need something relaxing to watch, but not something so bland that it is too boring. I usually have difficulty choosing a movie that my younger sister and I can both watch, but this is a movie that appeals to a broader range of interests. If you like emotional family movies with happy endings, this is the perfect movie to watch on a Friday night with the family.