Ocho Cafe in Westford gets only quatro stars 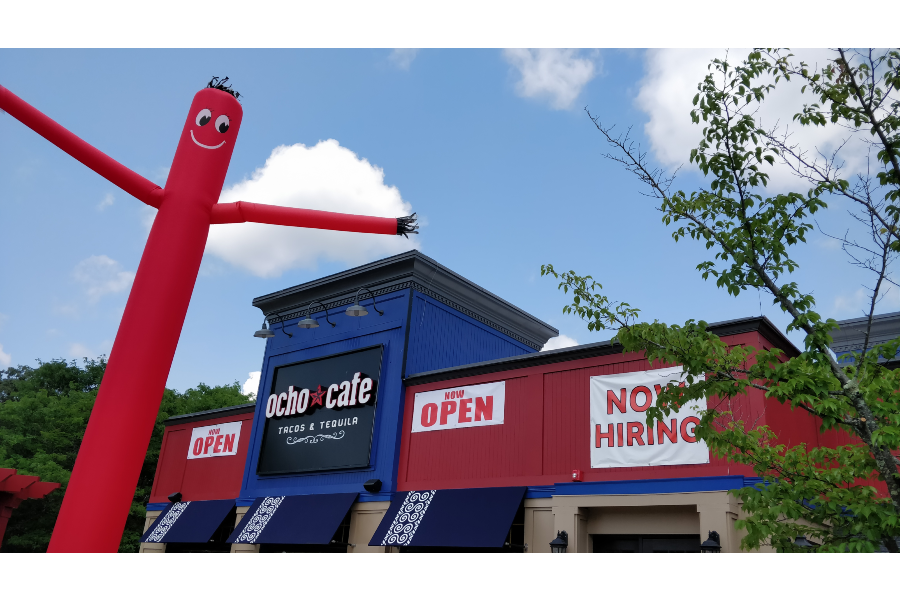 After much waiting and anticipation, Ocho Cafe opened on July 13. Located on Littleton Road in Westford, the restaurant serves Mexican food, including enchiladas, quesadillas, tacos, and bowls. There are also desserts available, such as flan and tres leches cake.

Walking into the restaurant with my family, I immediately noticed the colorful, Mexican-themed décor, which included brightly colored ceramic dishes on every table. The restaurant was centered around a bar, with booths along the wall.

At our seats, iced water, a bowl of tortilla chips, and salsa were brought to us. The chips were thicker than I expected, and somewhat hard, but the salsa was nice and spicy enough to complement the taste of the chips. We quickly ordered our meals. However, by the time they all arrived, the chips had all been eaten, and we had been waiting around forty minutes for the food to arrive.

We ordered the Ocho Bowl with Sauteed Veggies ($17), Vegetarian Enchiladas ($11), and the California Quesadilla ($11) to share. These, along with two or three other options, were the only vegetarian options available. There was also no kids menu available, which made it hard for my younger brother to order food.

One of the first things we noticed was that all of the meals were heavy on the vegetables, with large chunks of broccoli, cauliflower, and zucchini, and all of them had copious amounts of sour cream.

The Ocho Bowl was acceptable, but did not exceed my expectations. It contained your usual Mexican fare: rice, black beans, corn, guacamole, tomatoes, peppers, and onions, and was pleasing to look at with all of the ingredients’ different colors. It was not served hot, however, and seemed lukewarm at first. While everything tasted okay, the rice was somewhat dry and the vegetables were not cooked and still hard and raw. The dish would’ve been much better with better cooked and better spiced vegetables.

The Vegetarian Enchiladas was the dish that looked the worst. It consisted of an enchilada (beans, vegetables, and other fillings placed into a tortilla which is then rolled up and baked), some rice, black beans, and veggies, and some slaw. The enchilada itself was filled with bland, unappealing vegetables, and was soggy and soaked with sour cream. The rice that it was served alongside did not help with the flavor, and the slaw was equally tasteless. The sour cream could’ve been served on the side, which would’ve made the texture much better.

The California Quesadilla was not much better than the first two meals. It included four slices of quesadilla (a tortilla filled with cheese and other fillings, folded in half, and heated) with fresh guacamole and a somewhat bitter-tasting sour cream. The quesadilla itself was cold at the time it was served, and the veggies inside were hard, much like in the two previous entrees.

All three of these dishes are basic Mexican-themed dishes, but all of them failed to meet most basic expectations I had for them, including being served warm, being cooked through, and tasting good. However, the dessert we ordered was much better, though overpriced. Ocho Cafe offers four desserts, including flan, churros, and the one we ordered, the Tres Leches Cake ($7), which means “three milks cake”. Tres Leches cake is a dessert that is wildly popular in Latin America due to the recipe being formulated by Nestle and being printed on canned Nestle milk products popular in the region.

The cake itself is soaked in a mixture of condensed milk, evaporated milk, and heavy cream. While looking dry on the outside, the inside was juicy and sweet. The dessert was a welcome ending to the mediocre meal.

I would like to add that since everyone in my family is vegetarian, we only ordered vegetarian food. As such, the flavor of the dishes that contained meat was not tested, and this review may be different. However, this does not excuse how vegetarian options in many restaurants are low-quality compared to meat options.

While Ocho Cafe has had a lot of hype surrounding it on local Westford Facebook groups recently, it does not live up to it. The meals are bland and cold, and while the appearance of the restaurant is great, the food does not meet that standard. I would much rather recommend Chipotle for good Mexican food.