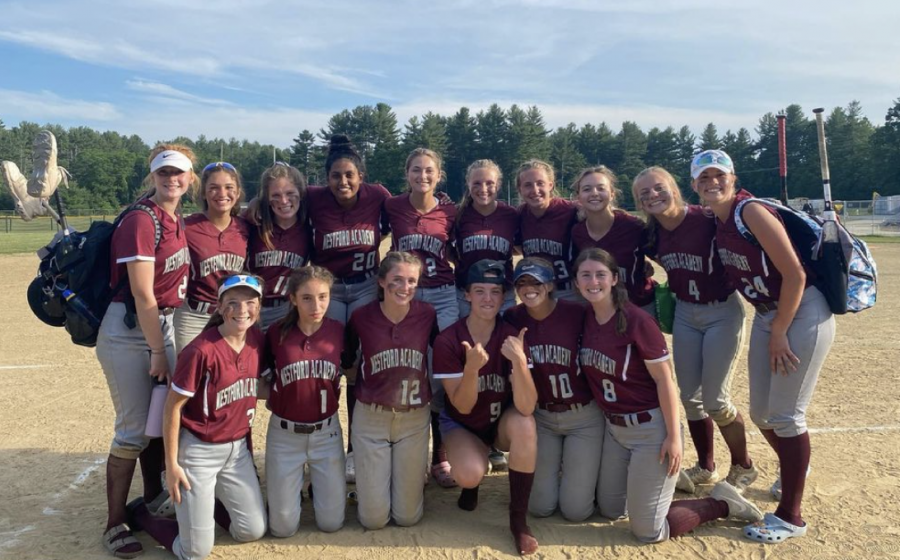 WA Varsity Softball poses for a picture after winning its game against Waltham.

As a result of WPS making the necessary decision to cancel spring sports last March in light of the pandemic’s beginning, multiple athletes and coaches were left completely disappointed. Around this time, in the comfort of her home, Westford Academy Head Varsity Softball Coach, Gina Mustoe, reflected on all the wonderful memories she had of her team; from the loud, bolstering chants to the incredible victories, she cherished all of the small aspects of the season that make it one of the best times of the year for her.

“When our season was approved, I remember feeling extremely lucky. The pandemic really taught me how privileged we are to be able to play,” Mustoe said. “In addition, the loss of our full season last year fueled a fire in [our] young ladies and gave them a new appreciation as well as respect for the ability to have a full season.”

This year, coming back with a newfound intensity, the WA Varsity Softball Team worked diligently, cooperatively, and strategically, which eventually paid off as they were named the Dual County League Champions this past Friday (June 11), with a record of 13-1.

Although Mustoe has been coaching WA softball since 2000, this year was her first as head coach. She regards this season as WA’s best in at least twenty years, with only the 2002 season coming close. Mustoe commends her players for being exceptionally competitive, in terms of defense and offense.

“Our team has done a phenomenal job with hitting. Our pitchers, specifically Ragini Kannan and Emily Strzegowski, are strong. If you can’t put the ball in play and capitalize off of errors, you’re not going to win,” Mustoe said.

Although technique, skill, and strategy are essential, according to Mustoe, the team’s endless support and trust for one another is half the battle. Mustoe encourages her players to live with the attitude of “no risk, no reward”.

“This team trusts each other and, for the most part, they trust me. When I ask them to do something, they do it and take the risk. If you trust and respect each other, you can’t help but do well as a unit,” Mustoe said.

Agreeing with Mustoe is recently graduated Emily Strzegowski, one of this year’s two captains.

“Coach has helped us in so many ways, but the biggest thing that she has brought to this program is the feeling of ‘one team, one family’. It has been our motto the whole season, and she has really taught us what it means to embrace it. You have to give it your all and do everything that you can in order to support your family,” Strzegowski said.

Speaking of support, of all her team’s attributes and accomplishments, Strzegowski is most proud of the way her team supports and cheers on one another.

“No one player is the reason we were named DCL Champs. We all work together and play to each other’s strengths in order for us to have the record we have,” Strzegowski said.

Even as a freshman, team member Sarah Kirby always felt included and respected. Although she was initially nervous to join the varsity team, all of her worries quickly faded when she realized how much team spirit the group had.

In addition to team spirit, Kirby credits the team’s focus for its successes.

“Our team always comes to the games with a winning mentality. We know what we need to do to win and work hard to reach that goal. This all comes with great leadership and encouragement from our coaches,” Kirby said.

According to Mustoe, there has been no particular game this year that has shown the team’s strength, since all of the players give all their effort and energy to each game.

However, Mustoe was most impressed when WA won all of their games against Acton-Boxborough, an especially tough team, and then, went on to sweep all of its games against Concord-Carlisle in the following week. In her own words, the victories of these two weeks were “surreal”.

On the other hand, Mustoe found the team’s only loss, which was to Lincoln-Sudbury (LS), to be one of the most memorable games of the season.

“We’ve been winning a lot, and that’s all well and good, but toughness comes out of not winning. The game against LS gave us the opportunity to reflect on our weaknesses and come back stronger than ever,” Mustoe said.

Similarly, recently graduated Kate Dulczewski, this year’s other captain, believes that the loss against LS, although disappointing, was rewarding.

“After our only loss this season against Lincoln-Sudbury, we all worked even harder at practice the next day and were able to beat them the day after that practice. We came out on top because we were able to work together,” Dulczewski said.

Although the team lost some aspects of the season, such as the music-blasting bus rides, all the players are grateful for the season. According to the captains, the team understands, like Mustoe, the privileges of being able to play the game.

This week, the team will play its first game in the state tournament. Mustoe, Strzegowski, and Dulczewski are proud of their team and excited to see where the rest of the season will go.

“I want them to hold their heads high and have fun. I want them to put everything they have into the game and leave the field, no matter how it goes, feeling proud of what they’ve accomplished,” Mustoe said.