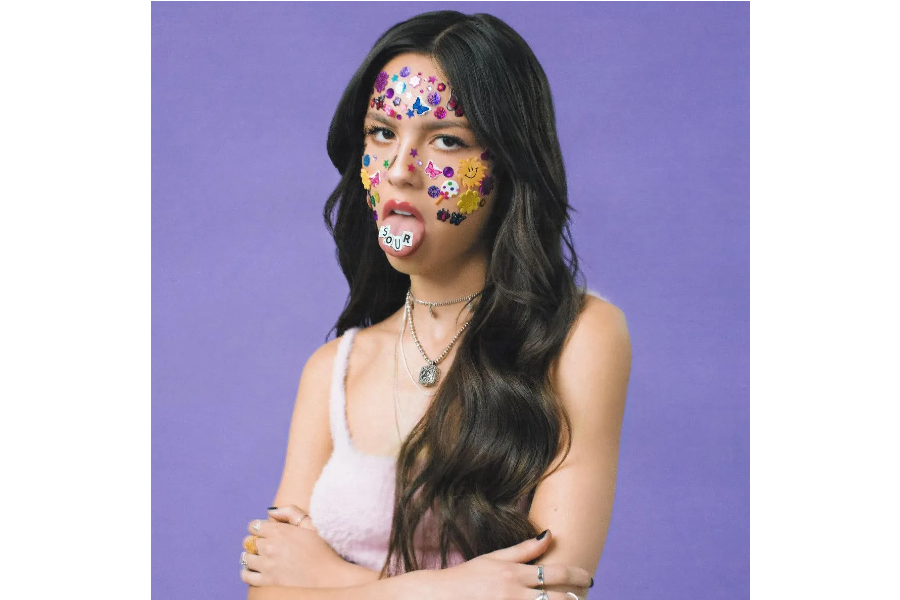 The album cover of 'SOUR'

Whether you know of her as Nini from High School Musical: the Musical: the Series or as the girl who released the smash-hit “drivers license” back in January, Olivia Rodrigo is a force to be reckoned with. Rodrigo, on Friday, May 21, released her debut album titled SOUR, further cementing her place in the music industry.

SOUR is an indie-pop and pop-rock record, mainly written by Rodrigo herself along with Dan Nigro, who also produced or co-produced all of the tracks. The album was preceded by the immense success, “drivers license”, the follow-up single, “deja vu”, and the angsty punk-influenced song, “good 4 u”.

SOUR is an album that takes listeners on a wild ride. Mostly ballads, the album is also interrupted by pop-rock or alt-rock bangers. All in all, SOUR is a no-skip album, and all of its eleven tracks are unique and show Rodrigo’s talent.

My favorite song off the album is probably ‘traitor’, a slow, synth-driven song with clever lyrics. The song is so heartbreaking, but catchy at the same time.

“Guess you didn’t cheat, but you’re still a traitor,” Rodrigo croons at the end of the chorus. Her vulnerable storytelling and emotion in the song is what may make it relatable to listeners. The song’s imagery also painted a vivid picture of the narrator’s experience in my mind.

‘brutal’ is a musically upbeat song which opens the album. It is a pop-punk song with a sharp delivery. The song talks about how young people are expected to enjoy their youth but how the narrator’s anxiety makes them unable to do so. The lyrics “I hate every song I write/And I’m not cool, and I’m not smart/And I can’t even parallel park,” are extremely fun to sing to while jumping up and down, dancing at how good the song’s tune is.

Rodrigo’s lyrical skills are once again shown on the song, ‘happier’, a slow bedroom-pop synth ballad, where she talks to an ex and wishes they are happy once they’ve moved on, but doesn’t want them to be happier than they were with her.

At only eighteen years old, Rodrigo’s vocals deserve a great amount of praise, as she hits every note and with emphasis where it should be. “Find someone great, but don’t find no one better,” Rodrigo delivers with breathy vocals.

One more masterpiece on the album is ‘1 step forward, 3 steps back’. This song actually interpolates ‘New Year’s Day’, a song on Taylor Swift’s 2017 album reputation. As a Swiftie [Taylor Swift fan], I immediately recognized the catchy piano riff.

‘hope ur ok’ is another song I loved from the album, and it serves as closure to SOUR. It is an uplifting, ethereal ballad about acceptance and pride about who one is. This, I feel, shows Rodrigo’s maturity.

While I initially thought in January that Rodrigo wouldn’t top ‘drivers license’, I was proven wrong. Other favorite songs off the album are ‘jealousy, jealousy’, with its upbeat, messy production; ‘deja vu’ with its passive-aggressive remarks; ‘good 4 u’ with its pop-punk perfection; and ‘enough for you’, another acoustic ballad.

All in all, I loved the album as it reminded me of another favorite artist of mine, Taylor Swift’s, music. Olivia Rodrigo has been called “Gen Z’s Taylor Swift” or the “next Taylor Swift”, but just because Rodrigo was influenced by Swift, doesn’t mean she has taken the place of Swift in the industry. They both are unique, wonderful artists in their own right.

I just think that Rodrigo draws a lot of inspiration from Swift, and that’s why I like Rodrigo’s music. Other artists Rodrigo is similar to are Lorde and Conan Gray, and I’d recommend fans of these artists to listen to SOUR.

For a debut album, SOUR is a masterpiece that showcases Rodrigo’s versatility and finesse in singing and lyrics, and will pave the way for Rodrigo’s inevitable success story in the field of music.

10/10, definitely would recommend to anyone