Construction of amenities building in progress 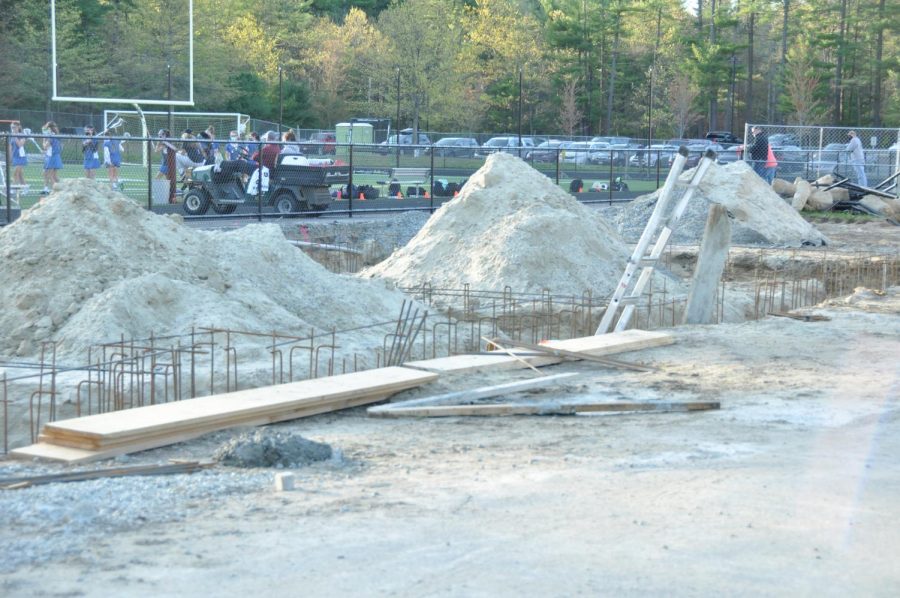 The construction of the amenities building near the Trustees Field.

The construction of an amenities building near the turf field is underway in order to meet Massachusetts’ Plumbing Code for School Stadiums. Under the management of Director of Facilities Paul Fox, the building will be complete for the fall of 2021.

The building is necessary to meet the number of bathrooms required as per the state plumbing code to support the WA Trustees Field’s operations. 1.3 million dollars was approved by the Community Preservation Commission towards its construction.

Although the code requires twice the number of bathrooms as what is in the design for the building, the state approved a waiver for WA to build at fifty percent capacity while still acknowledging the plumbing requirements.

“[The Boosters] have wanted to see the building ultimately help them, and they have wanted to be able to sell things [to raise money for WA Athletics] through a really professional stand. [The building] will really create a nice atmosphere at the stadium,” Fox said.

The construction of the building was meant to take place in the spring of 2020. After it was delayed due to the uncertainties surrounding the coronavirus, the general costs to start construction, as well as labor costs, had all risen.

When construction was ready to be started within budget in the fall of 2020, the weather served to be an issue. The winter conditions made it necessary for extra, costly precautions to have to be taken. Thus, the project was pushed back to the spring of 2021 to save the school money in the long term.

Regardless, both Fox and WA Principal James Antonelli state that the construction of the amenities building is the final component of the school’s athletic facilities, and it has been a part of the master plan for the complex for the past ten years.

“This [the amenities building] will be an awesome addition to a beautiful complex. We started [building the school’s athletic complex] with the turf field, then the bleachers, to the new track, and now to this new building,” Antonelli said.

Junior and soccer goalie Kiani Barnard-Pratt will use the building for her season in the fall, once the construction is complete. She thinks the building will greatly facilitate the sports season for her, her teammates, opposing teams, and the general WA public.

“It [the amenities building] will be good for other teams who are traveling to WA for games, as they will be able to use the field restrooms and get started with warmups quickly instead of losing this valuable time trying to find a bathroom. […] I think the new bathrooms will also encourage more people to come out to games, and this will help build the school spirit and environment for WA athletics,” Barnard-Pratt said.

As for the construction timetable of the building, Fox says that everything is on schedule. The building team will be working on the foundation, preparing and pouring slab, and doing masonry work in the next few weeks. Fox is excited for the project to progress, as the building will greatly improve the Westford community.

“School operations are [the reason for the construction], but we’re hoping to see that the community will also have some benefits from the design features. […] The whole project really excites me because it is great for the town of Westford and for Westford Academy,” Fox said.