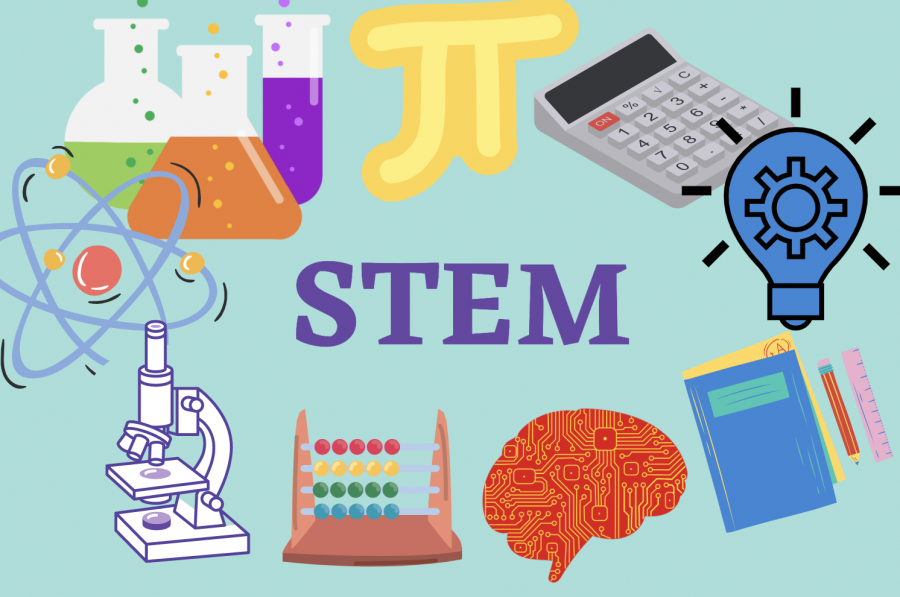 Made through Canva by Anushka Patil

With the positions of math and science coordinator open and the reworking of the school system’s budget underway, Westford Public Schools will hire an interim STEM (Science, Technology, Engineering, and Math) coordinator who will serve grades 6-12 for the 2021-22 school year.

After math coordinator Kristina Bold announced her leave of absence for the 2021-22 school year and former science coordinator Jenny Kravitz resigned, WPS started coming up with solutions for how to manage both departments. According to WA Principal James Antonelli, administration has been thinking of integrating a STEM coordinator position for a while.

“A lot of schools in the area have combined the math and science coordinator positions to create a STEM coordinator of some sorts. Right now, we have the perfect opportunity to introduce this position. By having one coordinator for the position, it would help connect these two departments, which has potential to enhance student learning even further,” Antonelli said.

In terms of the budget, assistant superintendent Kerry Clery mentioned at the April 13 Westford School Committee meeting that this new position would save $60,000 for WPS. At the same meeting, the school committee voted unanimously in favor of the job description for the STEM coordinator, a decision that commenced the process of finding a STEM coordinator. School committee chair Gloria Miller looks forward to the implementation of this role.

“I appreciate that an effort was made to re-evaluate. I think this is an exciting change, and a great opportunity to look broadly at STEM in our schools,” Miller said.

As for the job, the STEM coordinator will be responsible for planning curriculums and professional development, completing teacher evaluations, and working with administration, specifically Clery, in keeping the STEM classes in WPS engaging and under control.

As this position is one that oversees over sixty individual classes in the WPS system, Westford Academy has promoted science teacher Constance Menice and math teacher Wendy Croteau to the positions of science lead and math lead, respectively. Both teachers will receive a stipend for their new positions.

Menice and Croteau will still teach five classes. However, they will now be in charge of keeping their respective departments under control in terms of materials, processes, and small day-to-day problems. Menice and Croteau will report back to the STEM coordinator, who will be working more closely with developing each STEM program. There will be neither a science nor math lead in either of the middle schools.

“Two of the most important parts of the STEM coordinator job are going back and forth from school to school and keeping track of everything going on in terms of STEM at all three schools. In order to make sure that the STEM coordinator’s time is used effectively, we hired math leads, just to take care of the smaller aspects of a regular coordinator’s job,” Antonelli said.

Croteau also shares a similar concern in that she feels the STEM coordinator may not be as easily accessible as a coordinator specific to each department would be.

“The person that accepts this position will be in charge of all math and science teachers from grades six through twelve, which is a large group. It is possible that that coordinator may have an office not in the high school, which we are currently accustomed to,” Croteau said.

Administration acknowledges that there will be a transition phase while teachers adjust to the new position. In order to foster the smoothest transition, administration will work closely with the STEM coordinator. As WPS plans to have the position filled by Friday, May 7, the new STEM coordinator will have time to get comfortable within the school system before starting in the fall.

As for the position being an interim one, administration will evaluate whether to keep the role or not next spring, looking at its positive and negative impacts. Additionally, Bold still has her job at WA, as she is on a leave of absence. According to Antonelli, if administration chooses to keep the position after next school year, Bold will be offered the job.

All-in-all, Antonelli and administration are confident that this new role will have a positive impact on both the high-school and middle-school levels. Agreeing with them is Kravitz, who left WA optimistic for the future of the science department.

“All the teachers in the science department are incredible. We truly have an amazing team of hardworking, intelligent, flexible, cooperative teachers. I have full confidence that the department will adjust well to the new STEM coordinator,” Kravitz said.