It was the night things changed: Fearless (Taylor’s Version) 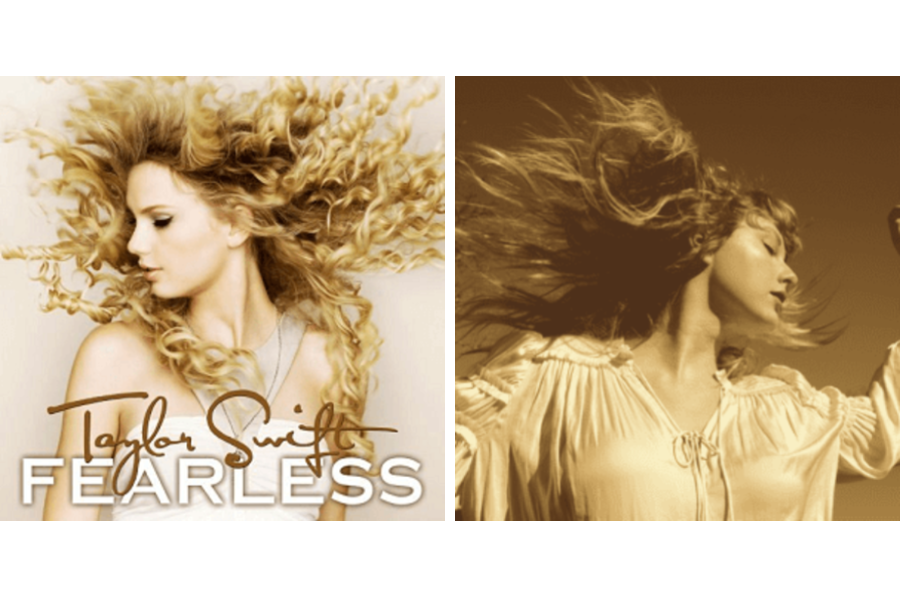 Both pictures courtesy of Wikipedia

The picture on the left is the cover of the original Fearless from 2008, and the cover on the right is the one for the 2021 re-recording.

When Taylor Swift announced that she would re-record her first six albums, Swifties and the general public alike waited on the edge of their seats, eager to see what she would do first. Well, the saga has begun with a new version of 2008’s Fearless, named Fearless (Taylor’s Version), on April 9, 2021.

Swift is planning to re-record her first six albums mainly because her original masters for these albums were sold to talent manager Scooter Braun when he bought Swift’s old record company, Big Machine Records. The masters were allegedly never fairly offered to be sold back to Swift, and in any case, Braun would make money off of Swift’s work, so she decided to re-record them to devalue the originals. So far, Swifties are loving the re-recording process, and we’re all waiting to see which album she’s releasing next.

The new version of Fearless features all thirteen songs on the original album, the six additional songs on the 2009 Platinum Edition, the 2010 movie single “Today Was A Fairytale”, and six “From the Vault” songs that were from the Fearless era but were never officially released.

Fearless (Taylor’s Version) is mainly a country-pop and pop-rock record with vocals from Taylor Swift, Colbie Caillat, Keith Urban, and Maren Morris. Production was handled by Christopher Rowe, Taylor Swift, Jack Antonoff, and Aaron Dessner. Three singles preceded the album, which were the lead single “Love Story”, “You All Over Me”, and “Mr. Perfectly Fine”.

The original Fearless is the most awarded country album in history, with four Grammy wins (two for the album and two for the song “White Horse”) and four Grammy nominations (three for “You Belong With Me” and one for “Breathe”). The album also brings many fans nostalgia and was once a fan favorite. This is why everyone was waiting to see if Swift would top everything the original was.

Well, she did. The songs on Fearless (Taylor’s Version) are near identical to the originals, but with matured, deeper vocals and more nuanced production. Many songs that didn’t appeal to me on the 2008 version were newly-found favorites on the new version, including “Change”, “You’re Not Sorry”, and “SuperStar”.

Swift’s new voice even suits many of the songs better. However, some of the emotion is lost in songs such as “Forever And Always”, as the original sounds angrier than the new version, which sounds like Swift is reading an old diary entry.

Some elements of songs were even changed from the original records, especially seen in “Love Story”, where Swift sings “you were Romeo” with a sharp stop at the end of “Romeo”, whereas in the original, the last “o” sound is drawn out. This change fittingly makes the song sound a little more urgent and rushed, which suits what the song is about—an edited version of Shakespeare’s Romeo and Juliet. Many of the instruments, such as the tambourines on “Change” and the rock-flavored instruments on “You Belong With Me” are now noticeably louder, which makes the songs sound much more polished.

While all of the songs on Fearless (Taylor’s Version) were improved from the originals, there are songs that were mediocre compared to the rest, including “Tell Me Why” and “Come In With The Rain”. This is not because they’re bad songs; they just contain strong elements of country music, which is something I prefer less than pop and rock (which shows itself on “Hey Stephen” and “Today Was A Fairytale.”

A few of the songs I absolutely loved include “Breathe”, “The Way I Loved You”, and “Untouchable”. “Breathe” features the country artist Colbie Caillat, and is a guitar-driven ballad that is catchy and melodic, with a drawn out chorus. It was one of my favorites on my initial listens. “The Way I Loved You”, being a fan favorite, was also boosted in my rankings, as Swift’s deeper vocals elevated the song. “Untouchable”, which was boring and unforgettable to me on my listen of the original Fearless, is also definitely a stand out.

Something no one was expecting during the re-recording endeavor is arguably the best part—the “From the Vault” songs that were originally written for Fearless but were left off.

Swift described them as songs that were written when she was “between the ages of 16 and 18 […] [and] were the ones it killed [her] to leave behind.”

All of the “From the Vault” songs are masterpieces. Swift absolutely succeeded at these songs, which she made with her frequent collaborators Jack Antonoff and Aaron Dessner. My personal favorite is “Mr. Perfectly Fine”, with its upbeat tune and heartbroken, sad lyrics. One can compare it to “Forever And Always (Taylor’s Version). Another vault song I loved is “Don’t You” because of the synth pop sound reminiscent of Swift’s 2014 album, 1989.

I’d recommend this album to any person who is a fan of country and pop, as the album ties both genres together. Also, anyone who remembers these songs from 2008 and 2009 would also feel some nostalgia, especially for the singles such as “Fearless”, “Fifteen”, “You Belong With Me”, “White Horse”, and “Love Story”.

Additionally, for Swifties, anyone who was a fan of Folklore and Evermore would love some of the slower songs on Fearless, while fans of Red and Lover would enjoy the faster, poppier songs. I also recommend Fearless (Taylor’s Version) to fans of Keith Urban, Maren Morris, and Colbie Caillat, as they are featured on the album.

Note: All song names are followed by “Taylor’s Version”.