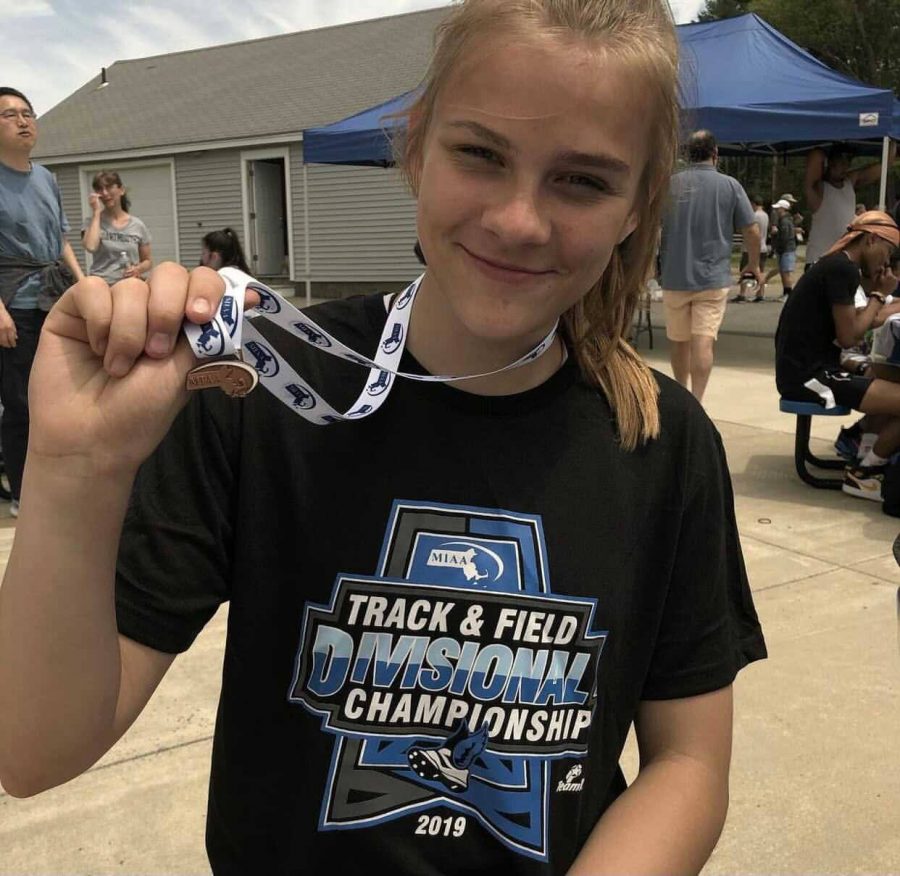 Wahlquist holding up 3rd place medal for long and high jump in the 2019 track and field divisional championships.

The senior girls track and field team captain, Maia Wahlquist, is someone who has persevered. When she returned to the U.S. from Sweden, she fell in love with track and field. However, she suffers from Compartment Syndrome, which has caused her many difficulties. She pushed through and now runs track and field for a D3 school, St. Lawrence University.

Wahlquist started track and field in the spring of her sophomore year, and she has been doing gymnastics since she was three years old.

Wahlquist and her family moved to Sweden for three years, and when she lived in Sweden, she never heard of track and field as a sport. When she came back from Sweden she ended up joining track and field and fell in love with it.

“I had to quit [gymnastics] when I moved abroad. When I moved back to the United States I wanted to try gymnastics again, but I was so out of practice […]. Then, I found out about track and field […]. I joined the first day, and I fell in love with it.” Wahlquist said.

Wahlquist decided to do the long jump and the high jump because they were the closest to her gymnastic background. However, Wahlquist struggles with Compartment Syndrome, which causes her to sometimes sit out.

“I have something called Compartment Syndrome […] but I’ve dealt with it for my entire track season or track career. Essentially, it’s just excruciating pain that comes from pressure buildup in your legs. I was sitting out practices and even meets because I was in so much pain,” Wahlquist said.

Physical therapy and fixing her mindset helped Wahlquist. This has been one of the biggest changes that Wahlquist went through while experiencing her struggles with her legs.

Even with the great accomplishments on Wahlquist’s record, the pandemic has still affected her college applications. She performed well in her sophomore and junior year, and she got college offers beforehand as recruitment starts pretty early. Also, Wahlquist was able to commit to a D3 track and field college, St. Lawrence University.

“I’m running track for them, so that was my biggest selling point […]. I’ve met a lot of the team members. I went up for an official visit, and I walked the campus, […] and it just clicked. It felt like home […],” Wahlquist said.

“The spring season, having those marks and scores would have helped me a ton, especially for getting into a D1 school. I had some D1 offers, but not enough interest because of the lack of [work] that I could have shown them. So, that took that opportunity away from me,” Wahlquist said.

Upon leaving WA, Wahlquist believes in being confident of yourself, and letting nothing get to you.

“Don’t be intimidated by the sport, or by the other athletes, because if you let the other people or the events intimidate you, you’re not going to perform as well […] If you’re not willing to try because you’re intimidated, you’re losing all of your potential and you’re not showing anybody what you can do,” Wahlquist said.