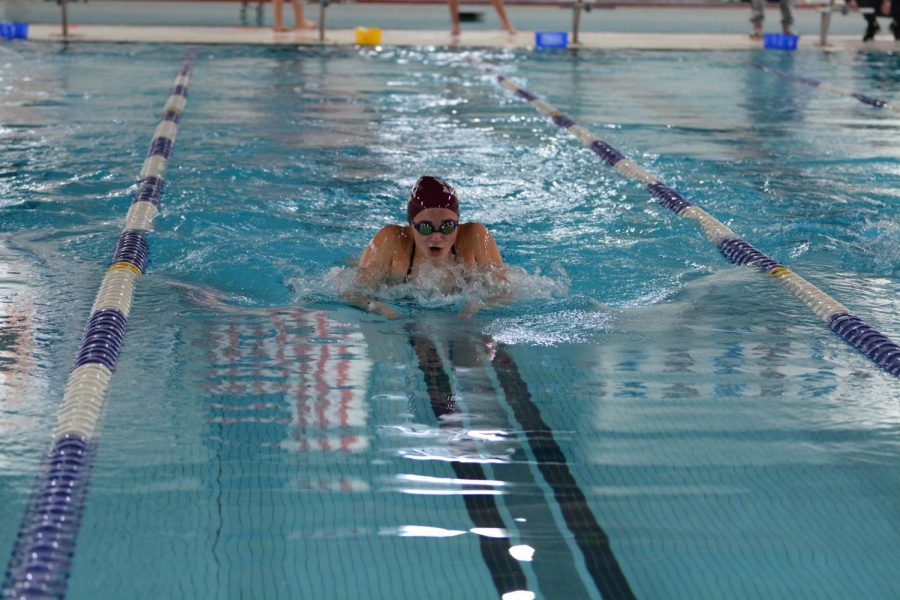 The WA Girls' Swim and Dive Team has won yet another DCL Championship, despite the barriers of having to compete virtually and not having States or Sectionals.

With athletes having to keep masks in Ziploc bags to wear when exiting the pool, a lack of postseason meets, and minimal team bonding, the Girls’ Swim and Dive Team’s path has not been easy this past season.

However, the team has still gone on to celebrate their sixth season undefeated after winning the DCL Championships.

“It was a close championship meet, but they couldn’t have done better. I think every single swim was a season best, so people really peaked at the right time and came together and had a great performance and that was enough to stay ahead of Wayland,” Coach Caitlin Klick-McHugh said.

One major contributing factor to the team’s success was the mindset that they carried with them into the pool, using the high stakes as a driving factor to push them forward.

“There was definitely a good amount of pressure, as we all hoped to continue that streak, but I think it’s also what motivated us. We knew when we had to step up our game and we were sure to be cheering on one another and really leaving everything we had in the pool,” senior swim captain Madison Leong said.

Because the meets were virtual this year with each team reporting final scores as a means to compete, teammates were pitted against each other in the pool. The team took this in stride, however, and put it on themselves to do well.

“Individually, I think each swimmer and diver puts pressure on themselves to do their part in securing wins for the team. We are all hungry for wins and that winning streak is important to all of us, so we all encourage each other to have good races and to dive well,” senior dive captain Kaely Harding said.

And additionally, freshman Estella Cui stated that internal competition is ultimately what made the team stronger as a whole.

“Rather than [thinking] like ‘Oh, I’m racing because I want to beat you,’ it’s more like, ‘Okay, we’re racing each other; let’s pace each other so that we can beat the other team.’ So I think in a way the team morale has gone up, rather than down,” Cui said.

According to Leong, swimmers were also given a log that kept track of the best times in the state, which helped to contextualize where their results stood despite the lack of in-person competition.

However, the challenges that the athletes have faced are not as triumphant as their successes. For one, although the DCL Championships were a great success, Sectionals and States were both canceled due to the pandemic.

“I was very upset to hear that we would not have States and Sectionals this year. Qualifying for a postseason meet is a big accomplishment for individual swimmers and divers, and winning States is the goal that we work towards all season as a team. The season definitely felt incomplete without those big meets,” Harding said.

In lieu of this, the coaches stepped up to push the players to reach their full potential.

“A lot of our goals had to be rearranged because most of the time our goals are ‘qualify for sectionals and states’ or ‘doing better than you did last year at states.’ […] That was definitely hard on the team but I know that we just had to reprioritize our goals and just [say], ‘Okay, how high can your score go?’ [and] ‘How awesome can we do today?’—just little stuff like that [to] get them motivated,” diving coach Rebecca Finnigan said.

Perhaps the biggest setback was that they were unable to gather as a team. Not only were there split practice times and less time to train due to pool availability, but spaghetti dinners (SPAGs) and other in-person bonding activities were limited due to protocol.

“We never got a chance to all practice together, or all be together at the meets. I do feel as if the pandemic retracted from my final year as we only practiced 3x [three times] a week for a limited time, were unable to have spags, do the team scavenger hunt and do many other activities and traditions,” senior swim captain Madison Leong said.

Senior dive captain Kaely Harding also commented that the diving squad practices separately, even in a normal year, so this year has been particularly difficult in trying to stay connected.

“In past years, at least since I have been diving for WA, the divers have always had a separate practice time from the swimmers which does make it a bit more challenging for us to get to know each other. However, we all come together at meets, and in a normal year, spags and fundraisers. So it is unfortunate for the new divers this year that they were unable to participate in some of the activities that make this team so close,” Harding said.

In spite of this, the captains still made the best of their season. Spirit days on Fridays before weekend meets were held, posters were made for seniors on senior night, the upperclassmen taught their team cheer to the freshmen on the team, and virtual dryland workouts hosted by Klick-McHugh every week were a chance for the whole team to practice together.

Ultimately, although the team was still able to enjoy a fulfilling 2021 season, the team hopes for more team bonding to occur in the next season.

“Our team culture is a big reason why a lot of people come out for the team and stick with it for all four years. […] We’re a really diverse group [where] everyone competes. […] Little details like that [the team cheer] I think helps the kids bond and feel part of the team, but I’m definitely excited for 2022 to get back to some regular team bonding,” Klick-McHugh said.