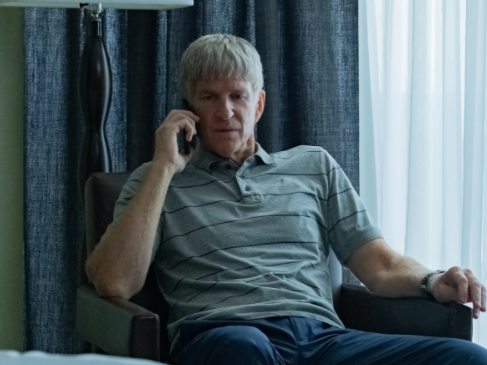 Rick Singer on the phone with parents.

We currently live in a world where money speaks volumes. If you are wealthy, you can get what you want just by spending a little extra money on it. With power from wealth and nobody to stop them, people tend to not see the line between what is right from wrong. The benefits of the wrongdoing often outweighing their morals.

A perfect example of this is the college admission scandal of 2019 “Operation Varsity Blues”. This was not okay, wealthy people shouldn’t be able to cheat a system set in place to try and make sure every student has an equal opportunity. I’m glad this documentary came out so people can learn the truth.

Operation Varsity Blues is what the government called the largest college admission scandal ever prosecuted by the U.S. Department of Justice. Dozens of parents were charged with paying millions of dollars to bribe their kids’ way into elite universities. They did this by using Rick Springer a college admissions counselor to cheat on the SATs for them. Or used college coaches to get their unqualified children in as elite sports recruits (using Photoshop), or both. Back in 2019 it was a topic of outrage amongst people, and the release of this documentary has brought the topic back into circulation.

Often wealthy people think it is the end all be all for their children to attend top ranked universities. They think having their children attend such schools will show that they have raised successful children, even though most times these students didn’t achieve the needed stats to get in. This distress is where Springer looked to make money. He had parents begin paying him to fake their children’s credentials in order to get into top universities across the country, including Stanford, Harvard, and Georgetown.

By taking the wiretapped phone calls from the FBI tapping Rick Singer’s phone calls, this documentary creates a whole new level of real that many other documentaries have lacked in the past. Mathew Mondine, who impersonated Singer, reenacted the conversations Singer had with parents. These are the same conversations that the government used to build the case. Although this was a smart use of a different piece of technology, it does leave some questions unanswered because they were real time conversations with no other context. But this documentary was not based on one family or a powerful person’s experience, but instead on how the college admissions process is set up in a way that doesn’t put students and their well-being first.

Singer offered these parents a side door access to some of the most prestigious colleges in the country. When the front door, the normal application process, was far out of reach for these students, and the back door, the donation route, would cost the family way more money than this illegal alternate path. Singer’s side door opportunity was far more appealing than the back door, so many parents were left to ask themselves is this really worth it. For most it was enticing as it was a way to spend $1 million instead of $50 million to get their child into prestigious colleges. Singer’s plan was based highly on fraud by taking false SAT and ACT tests. This wasn’t just a case of giving money for admittance but was also an elaborate scheme that used the weaknesses of schools for his benefit. This targeting the programs that needed money more than other schools.

One of the other things that stood out to me about this documentary was the fact that the parents on the other side of the phone did not think or understand about the severities of their actions because it didn’t seem like a big deal. The money was nothing and they wanted the prestige of sending their kids to top-ranked universities.

Unfortunately, the other tragedy brought out of this was that most of the kids didn’t even know that their parents where cheating the system for them to get in. They believed their academic stats were good enough and they deserved to get in, while the less fortunate kid who worked so hard and rightfully got in would be left on the bench because the college system is corrupt and focuses more importantly on what will make them the most money. Now Singer is awaiting his sentencing, which will be much shorter because of all the parents he turned on as apart of cooperation with the FBI. I wonder if he realizes he showed the world what privilege can do in our society today. Nobody but the 1% has the ability to cheat and lie their way into the top-ranked universities.

Overall, I really enjoyed this film, but it also brought me so much frustration. Because I could see right in front of my eyes how a corrupt system was left there to benefit the parents, while the students are left to see that their grades and achievements were not good enough for their rich parents’ approval.

I recommend watching this film to any parents or teenagers who are struggling with college decisions because it shows that prestige at top universities is not everything.