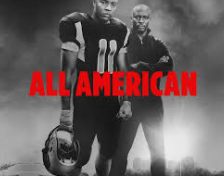 Provided by the CW Network

The CW Network television series All American premiered on October 10, 2018, and is now three seasons long (season three episodes are still coming out week by week). The television series is an unnecessarily dramatic show, but somehow will keep you coming back every time a new episode is released.

All American is based on a true story about a high school football star named Spencer James (Daniel Ezra), who transfers from his hometown high school in Crenshaw to a new high school in Beverly Hills, and then, eventually, back to Crenshaw. The show displays all of the trials and tribulations of a teenager who tries to balance his football life in Beverly and his family life in Crenshaw.

After playing in a football game for Crenshaw High, Billy Baker (Taye Diggs) (Beverly High Football Head Coach) went up to Spencer and asked him to come to play for his team in Beverly. Spencer initially declined because he didn’t want to leave home, but his mother (Karimah Westbrook) later encouraged Spencer to transfer to Beverly to follow his dreams of getting recruited to play college football. Billy Baker offered to let Spencer stay in his house while he was in Beverly Hills so Spencer didn’t have too long of a commute every morning.

Spencer and his friends come across many difficult situations throughout the show, such as dealing with gangs, gunshots, and plenty of relationship problems. I feel like the show is unnecessarily overdramatic at times when it comes to these events. For example, Spencer and his girlfriend, Layla (Greta Onieogou), seem to have a random argument in just about every episode. In one of the episodes in season two, Layla got mad at Spencer for trying to protect her after her house was broken into.

Those overdramatic events tend to take away the focus from the football aspect of the series. I assumed that football was intended to be the main storyline of the show, yet I quickly realized that it is more about relationships than football. In season three so far, it feels like I could count on one hand the number of times I’ve seen a football field.

While the story is definitely overdramatic, I will admit it keeps me wanting more. The overdramatic events tend to be what keeps me coming back. I always come back to see if the situation works itself out. Also, the majority of the episodes leave off on some sort of cliffhanger. In one of the latest episodes in season three, Spencer and Layla get into an argument, and the episode ends with Spencer about to reveal a deep secret to Layla. This is a prime example of a cliffhanger causing me to look forward to the next episode.

The acting has dramatically improved from the first season to the third season. My family and I watched the beginning of the first episode to see if we wanted to start the series, and the acting was definitely subpar, so we immediately stopped watching. Later, we gave the show another chance and before we knew it, we were hooked.

More specifically, the major problem with the acting in season one was the football part of the show. The football games looked very unrealistic (even for a TV show). Many of the plays that Spencer would make when running to the end zone were so unrealistic that I found myself laughing at some of the games. The acting was a major problem at the beginning of the show, however, especially in season three, the acting has improved significantly. It makes the show more enjoyable to watch during some of the very dramatic scenes because it at least makes you think as an audience that the actors were truly feeling the emotion. For example, Spencer’s father became very ill and it felt like Spencer could truly feel the pain. In that scene, Spencer was screaming in pain from seeing his father sick, and it really made you feel like he wasn’t even acting.

All American does have its fair share of explicit language and sexual activity, which is the main reason for it being rated TV-14, but I would recommend it to anyone of the age of 13+. Even though it is technically a football show, it includes far more drama and other non-football-related events such as complicated relationships and weekend getaways that will keep you very intrigued, even if you don’t know the first thing about football.