Hinduism is not yours to manipulate 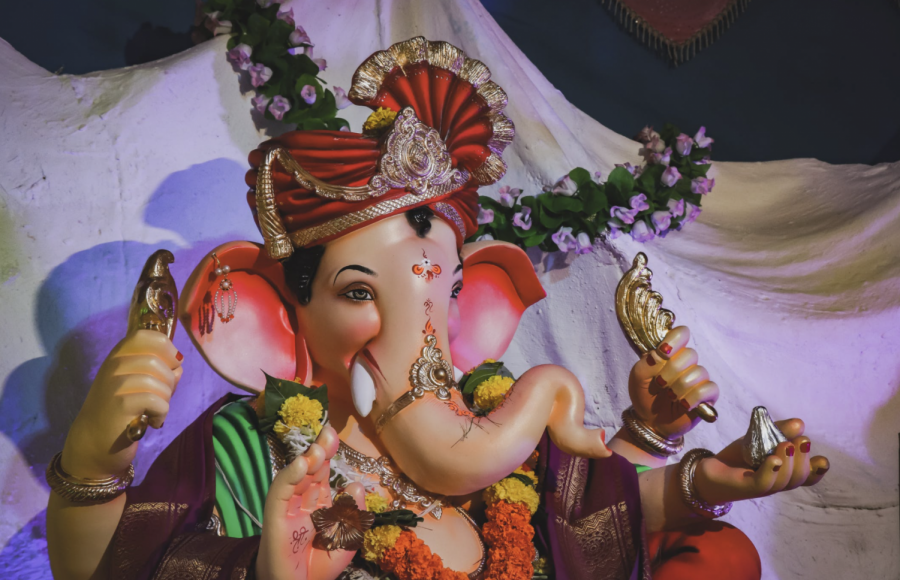 Many Hindu gods, including Lord Ganesha (pictured here), are seen as absurd in western media, fueling a stigma towards the Hindu religion.

My eyes wandered as my mother purchased the groceries. From the bright lights of the aisles to the alluring candy bars, my ten-year-old self was fascinated by every aspect of our local Market Basket. In the middle of inspecting the front cover of a scandal-ridden People magazine, my attention was pulled to the woman standing behind me with a cart full of delicious goodies that were banned from entering my household. Although tempting, it was not the assortment of cookies that originally captured my attention but rather the Om tattoo that decorated the woman’s left ankle.

There I stood, completely taken aback by the insensitivity in front of me. Although I was young, I knew the importance of the Hindu Om and the blatant ignorance someone must have if they chose near the foot as their ideal location for the Om.

Wearing a sacred Hindu symbol near your foot is not only impure but insulting. When Hindus go into temples, they typically remove their shoes and rinse their feet in order to show cleanliness when standing before God. Since the foot gets dirty throughout the day, it is wrong to keep a divine symbol near an unwashed vicinity of the body.

Recently, this supermarket memory of mine resurfaced when I was scrolling through my TikTok feed. TikTok, an app that allows creators to post short videos of themselves and interact with others, has taken over mainstream media. As much as I love the platform that TikTok gives people to create content, I sometimes find myself made uncomfortable by the content produced.

Scrolling through my TikTok feed, I am met with at least three TikToks daily in which the Hindu faith is being distorted into a new trend of ‘spirituality’ and ‘manifestation.’ Thousands of young, non-Hindu teens are using agarbatti (incense), yoga, meditation, and Hindu deities to display their newfound spiritual connections.

In fact, it is not even just these TikTok content creators that are using Hinduism as a trend, but celebrities who get ‘glam’ and wear sacred Hindu symbols as part of a chic, fresh outfit. Just last month, Rihanna posted a provocative purple outfit on Instagram in which a necklace with a Lord Ganesha (elephant-headed Hindu God who represents wisdom) pendant was dangling all the way to her exposed lower stomach.

Honestly, I wish this Rihanna incident was the only time that Hindu symbols and culture were being used in a disrespectful way, but forms of religious ignorance have been happening for decades, with countless other celebrities adorning themselves in religiously inspired jewelry and outfits.

Furthermore, the fundamental issue with TikTok creators pushing out content that disguises Hinduism as a new form of spirituality, with the use of crystals,  is that it disregards the traditional practices of Hinduism. Even worse, Hinduism is belittled when influencers and celebrities boast religious symbols on their body and outfits.

There is not much else that I can say other than that it is flat-out disrespectful to not acknowledge the influence that Hinduism has on mainstream media’s interpretation of ‘spirituality’, and it is disgustingly hypocritical of people, who expect others to be respectful of their cultures, to adorn themselves in symbols that are holy to another group of people.

Instead of learning about the traditions and respectful practices, people distort Hinduism into a trend, something that will be appropriated for a few years and then tossed to the side as a new trend comes about. These people, who appropriate the Hindu religion online, have the ability to influence thousands of impressionable minds. As Hinduism is being almost plagiarized and symbols that are worshipped by many are minimized, there is a growing universal belief that these acts are acceptable, that it is alright to disrespect someone’s religion.

I think it comes down to the fact that the US is a melting pot of culture. I find it so beautiful how many of us are able to learn about and appreciate each other’s cultures. Nevertheless, mainstream media has been westernizing not only my culture but the cultures of other minorities for years. This takes traditional aspects of certain cultures and alters them to fit with biased standards.

Westernizing can be seen in yoga and meditation. Western countries have diluted traditional Dharmic (Hinduism, Buddhism, Jainism, Sikhism, and others) yoga practices to fit with their capitalistic systems. The westernization of yoga allows non-Dharmic people to profit off of sacred Dharmic practices, erase traditional practices by creating new norms, and perpetuate Dharma’s inferiority to the Western powers. In addition, many “yoga teachers” are non-Dharmic people, meaning that they do not understand the origins of yoga poses. These teachers are unable to properly educate their peers, fueling the appropriation of yoga, and Hinduism, even further.

Like yoga, the mindfulness industry makes a large sum of money every year by exploiting Hindu principles and practices like the Law of Attraction and meditation. This exploitation has all the same negative effects as yoga, in terms of unfair profits and cultural appropriation. In addition, one thing to note about meditation, specifically, is how Hindu deities, who sit in meditative positions, are looked upon as demonic by multiple racial and religious communities.

I have stumbled upon a handful of TikToks in which people are shaming the Hindu religion for its deities and practices. Some people even go as far as to say that Hinduism is inhumane. Since the western market takes practices like meditation and distorts them into western trends, the people who disrespect my religion buy into an industry based on a religion they supposedly detest, signing up for meditation seminars and yoga classes without a second thought.

In terms of my personal experiences, there have been so many instances, especially in elementary school, in which my peers ridiculed Hinduism for the appearance of its deities that do not look like the figures of other religions.

Now, those same students, who mocked me relentlessly in elementary school for my culture and religion, are the ones posting about meditation, manifestation, and crystals on their social media accounts.

I think it is incredibly unfair that the media and society, in general, steal parts of Hinduism to become big trends. These parts lose their sacredness as a result of being twisted to fit white standards. The parts that do not get twisted are left for ridicule. As society praises the distorted versions of my religion, it scorns upon the traditional aspects of Hinduism.

Honestly, I feel like American media promotes the manipulation of Hinduism and allows for its appropriation. I rarely see any celebrities or social media influencers getting called out by the media for disrespecting the Hindu religion. For example, Rhianna received little backlash and issued no apology for her Ganesha accessory.

The problem with the media, celebrities, influencers, and even school districts not speaking up about Hinduism appropriation is that it shows the next generation of adults that irreverent treatment of religion is acceptable. This could lead to a sense of inferiority in the Hinduism community as it may seem no other community supports them.

On a separate note, I am not trying to create a distance between Hinduism and the rest of the world or put up a barricade that blocks non-members of Hinduism from getting a glimpse at our religion. Hinduism is beautiful in the way that it is an open religion, welcoming people to join in and celebrate the practices. No matter your race, gender, sexual orientation, or age, you can practice Hinduism if you desire!

There is a big difference between cultural appropriation and cultural appreciation. We should not gatekeep. In order for all of us to feel comfortable around each other, even with our differences, we need to be open to sharing and teaching. We must be sensitive to each other’s cultures and only practice what members of that culture feel comfortable with us practicing. Instead of appropriating cultures and making them into trends, we have to acknowledge and appreciate each other’s raw cultures, the cultures not appropriated by the media.

One of the most important parts of the human experience is growth. As I think it is important to approach Hinduism with respect, I think it is also quintessential that people learn about the general principles of the religion. One of the countless beauties of Hinduism is the fact that it is an open religion, welcoming outsiders to absorb the wonders of the faith.

For the TikTok creators who enjoy ‘spirituality’, I encourage them to learn about and credit Hinduism for the practices integrated into a ‘spiritual’ lifestyle.

Even if you are not actively disrespecting a religion, I still think it is important to learn about the religion. With the resources we all have, learning can be easy. You can watch videos online or read sources from the library. Even a couple of minutes of familiarizing yourself with a religion can open up your eyes and change your perspectives completely.

At the K-12 level, school districts, including that of WPS, can integrate mandatory lessons in specific course curriculums that focus on educating students on a variety of cultures and religions. Although I remember learning about Hinduism in middle school, I wish we spent as much time on this religion as we did with others, including Islam and Christianity.

As a society, we need to change our mindsets. No religion is superior to another. If we can do a better job of spreading awareness, destigmatizing certain religions, and educating ourselves, hopefully, we can change the majority of people’s outlooks on religious superiority.

All in all, I encourage cultural appreciation, not cultural appropriation. With the right amount of sensitivity, learning about religion can be beautiful. You need to be willing to grow, change, and discover. There is a lot of hate in this world, hate that causes division. If we can all come together to embrace each other’s differences, empathize, and learn about each other’s heritage as well as practices, I truly believe the world can be a better place.

“The Modern Appropriation and White-Washing of Hinduism” – Sanskriti Deva

“Rihanna’s Ganesh pendant – Hinduism is a religion, not a pretty aesthetic” – Rina Arya

“What is Hinduism” – Cogito

4 Responses to “Hinduism is not yours to manipulate”