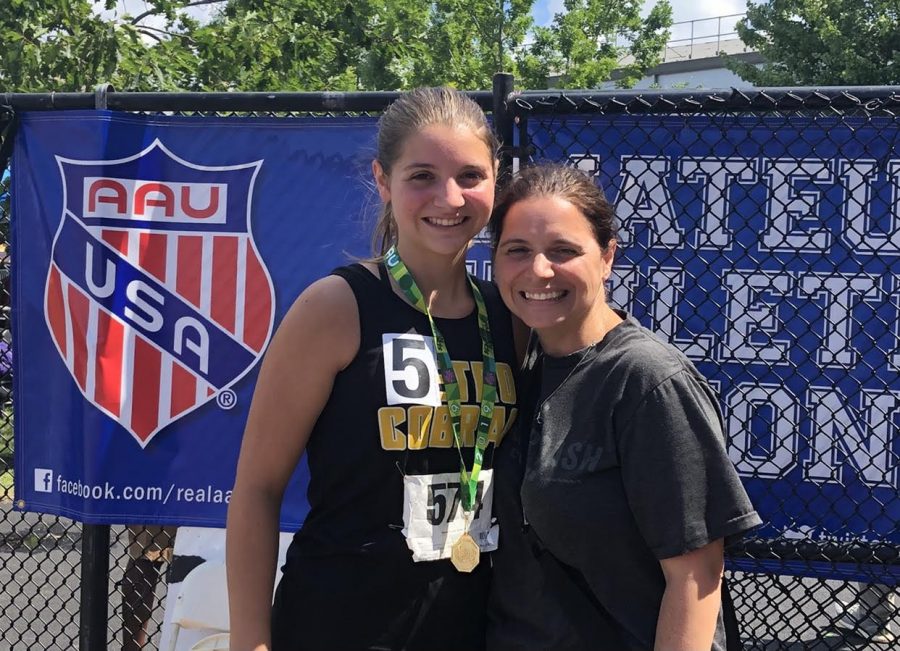 She is on the line ready to compete gone is the girl who listens to sad songs and watches scenes from a childhood classic movie, and in comes the predator ready to hunt down her prey and do anything to beat them. At the starting line her mind goes blank and with the sound of the gun, she is off to the races leaving her competitors in the dust. Competing is what Ellie Tweedie lives for.

Tweedie has been a competitive track athlete for the better part of five years. She is a long jumper and sprinter and competes in outdoor events including the 100m, 200m long jump, 4×100 relay, as well as the indoor 55m 60m 200m long jump and 4x200m. She has achieved a great deal of success in the last few years, including trips to the Junior Olympics, USATF nationals, ESPN AAU Nationals, and many more high caliber events.

Growing up, Tweedie played many other sports, including basketball and soccer. She realized she was faster than a lot of the other kids early on, so when track became an option in middle school, she joined for fun and soon realized it was more than a after school activity. By seventh grade, she was traveling the USATF circuit and qualified for the Junior Olympics.

Now she continues to run in big events across the country and constantly tries to improve by lifting weights and working with DJ Brock, a speed and agility trainer. With him, she works hard on drills to become faster in the events she runs.

Tweedie trains three days a week for track. For two days, she trains with medium intensity and high volume, and for one, she trains with high intensity and medium volume. On the other days, she will go to the gym to work out for around two hours. Although training for track is time-consuming, she also tries to make sure her academics are just as successful. With a tough sophomore workload including one AP course and three honors classes, Tweedie stays disciplined and credits track as the reason she is so motivated in the classroom.

“Elli is a hard worker. She wants to be great at everything she does. She has big goals and pushes herself to accomplish those goals. It’s not just on the track but in the classroom as well,” Brock said.

Some of Tweedie’s goals include becoming a state champion, a record holder, and a collegiate athlete at a top-ranked academic and athletic program on the east coast. With a strict balance between taking challenging classes, working out, and training hard she is able to be successful in all she takes on. Also, on her side is a strong support system, including Brock and her mother Allison Gould. The training and support she has received from these two people particularly have been instrumental to her success.

“My biggest motivation is the feeling of winning. I get that from getting good grades, new records, and every other little thing that I can work to be good at. The people who push me the most include me, my Mom, and Brock. I think that I push myself more than anyone else, but I wouldn’t do that without the training I have received for the past 6 years from DJ Brock. My mom has also raised me to push myself to the max,” Tweedie said.

Tweedie has also faced physical challenges. She recently recovered from a hamstring injury in December, an injury that required a lot of time due to overuse and lack of rest over the summer.

“If I could go back and change anything, it would be my recovery last summer. If I could go back, I wouldn’t have kept pushing my self and I would have taken my rest seriously. I would be in a totally different place right now if I hadn’t kept running and making mistakes while injured” Tweedie said.

Also, a challenge is Tweedie’s difficult practice schedule. Because she runs for the Metro-Cobras team she often has practice on school nights in the Boston area.

“As a parent of an athlete who aspires to run track in college my first priority is to support her in any way that I can.  There are plenty of struggles along the way, like her schedule.  Trying to get her to every practice, workout, and meet can be a little stressful, but we manage,” Gould said.

Physical challenges are not the only thing that Elli has to overcome. She often has people putting her down saying things like “track isn’t a sport” “you aren’t running D1” and “you aren’t that good”. All things said to try and tear her down. And even though she has pushed through in the past the comments do sting. Along the way, she has almost given up a handful of and has sometimes stopped trusting the process. She has also learned from her critiques.

“No matter what challenges I face, I always find a way to get by and come back better than before,” Tweedie said.

For Tweedie, the last five years have not always been easy. But the competitive atmosphere and support from her family, coaches, and teammates have kept her going, including her future aspirations to run as a D1 track athlete.

Tweedie has had to face a bigger challenge as well this year, one out of her control. The COVID-19 pandemic has played a huge part in her ability to compete. Last spring she was unable to compete on WA’s track team. The struggles to find events continued early this summer when competitions were limited to online events. You would send in your time with video proof as a comparison to others in your division. Since November competitions started opening back up, most of Massachusetts’ indoor tracks have been closed for the season.

Even though Tweedie has had to overcome many different obstacles over the last few years she is still able to remain positive. She brings her 100 percent to all of the things she does so willingly and also continues to have fun doing it. She is able to keep her training lighthearted and fun by joking around with her coaches and teammate whilst remaining motivated. This is a quality her teammates look up to her for.

“When an athlete truly shines, I believe it is due to their mindset rather than ability. Although not every day one is able to perform at their 100% best, each day one can always give 100% of their effort. Elli Tweedie’s work ethic captures this mindset which not only makes her performance level excel but also makes her a role model to her peers,” Teammate Melissa White said.

Although Tweedie still has a journey ahead of her to accomplish her goals of running at an Ivy League or Ivy plus school, and to eventually go to medical school to become a surgeon. She is ready to put her best foot forward. With her dedication and support, she is on her way. Brock gives her advice for the future.

“Be patient and trust the process. There will be bumps along the way, but if you stay consistent and trust everything and yourself you will see the results,” Brock said.