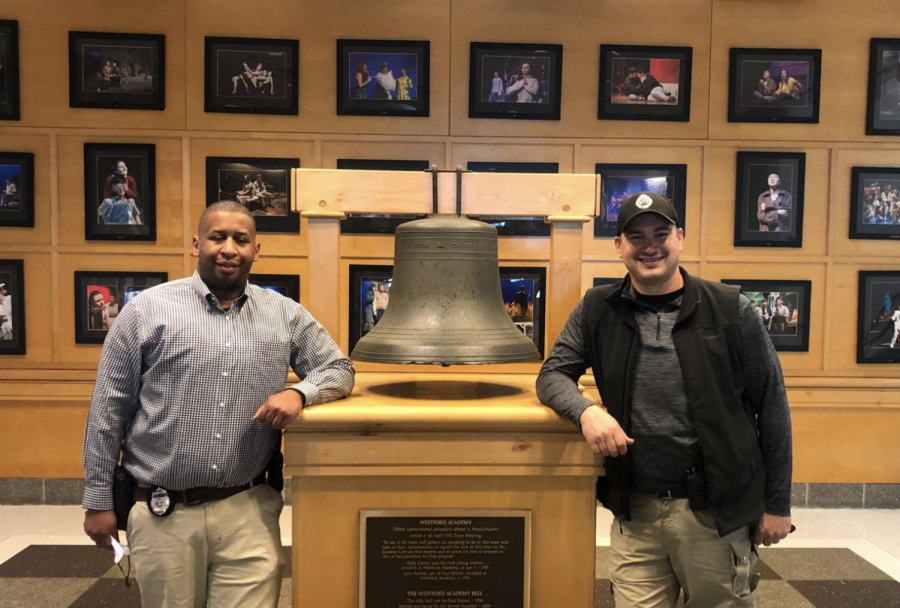 Provided by the Westford Police Department

“When I heard about the position, I immediately wanted to apply. One of the reasons I became a police officer was to help the community. However, I was mainly on night shifts, so I didn’t get the chance to build a relationship with the youth,” Bernadin said.

For the position, applicants submitted letters of interest to WPD Chief Mark Chambers. Then, a committee, made of members of WA’s administration, interviewed six of the finalists. According to WA Principal James Antonelli, Bernadin’s goals and qualities aligned most with WA’s community and expectations out of all the final candidates.

In terms of his goals, Bernadin wants to collaborate with the faculty at WA to help students remain positive and safe during the pandemic. Additionally, he hopes to set students on the right path in order to ensure success.

“I want to keep everyone safe and make sure that everyone feels comfortable at school. I know it’s a tough, stressful year with the pandemic and that a lot of the seniors are missing out on major milestones,” Bernadin said. “My goal is to make all students feel better and make sure that they know that I am here to help. I am fully invested in contributing to the Westford Academy community.”

In addition, Pavao will not be leaving WA completely, since he will assume the role of late night supervisor. Antonelli anticipates a great hand-in-hand relationship between Pavao and Bernadin as both are committed to helping the community.

On another note, Bernadin’s transition to WA has been smooth. He credits Pavao for helping him transition and immerse into the Westford Academy community.

Antonelli and Pavao believe Bernadin is the right fit for Westford Academy, feeling that Bernadin possesses all the skills necessary in having a positive impact.

“He is a great, well-grounded collaborator with a real vision for the future of Westford Academy,” Antonelli said. “He’s been a patrol man for three years, so he definitely knows the lay of the land. He has a real passion for working with students at this age level, and I think we are going to see that passion come to the forefront.”

Pavao even sees himself in Bernadin.

Pavao hopes that Bernadin will involve himself in the community and become a trusted adult, someone that students can talk to and come to as a resource.

“The most important thing is to make as many relationships as you can. It’s important that you go into classrooms and attend as many events as possible,” Pavao said. “A lot of the things you do as a school resource officer may not even be policing. It’s important to recognize where you can help and teach students.”

Bernadin is excited to begin the position, even though he is joining half way through the year. Seeing this as a long-term position, he hopes to form long-lasting connections with all the students and faculty at WA.

“I live in Westford, so I want to build a bridge between myself and the community. I also have a child going into the Westford Public Schools System, so I want to make sure that I help build a great school community. I hope to make the school system the safest and best it possibly can be by the time my son enters the system,” Bernadin said.

To check out more on Detective Pavao’s resignation, check out this article.