Zayn Malik’s long awaited album, Nobody Is Listening has arrived 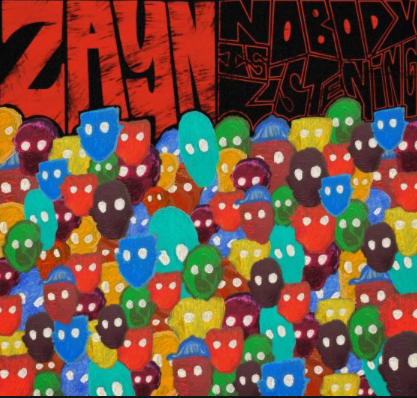 Album cover for Zayn Malik's "Nobody Is Listening"

Zayn Malik’s third album, Nobody Is Listening, was released on January 15 and already has over 100 million streams across all platforms.

On January 8th, the singer released the music video for “Vibez”, the fourth track on the album. The song holds true to its name. The song starts off with some background music and quickly transitions into the chorus. It is a slower-paced song. The song flows smoothly and is easy to get lost in. It is the type of song you could study to. It is not distracting and does not require much attention, but is still enjoyable to listen to.

The album overall has a slow yet pop-like pace, with a steady beat in most of his songs. He manages to make a relatively simple background sound match perfectly with his voice in each of his tracks.

The first song on the album, “Calamity”, follows a simple piano and drum-line with a fairly monotone tune. Zayn finishes with the lyrics “Nobody, nobody is listening to me”, tying back to the album’s name. Zayn describes his mind feeling like a prison as he watches his life pass by, as his mind is filled with rumors.

Before this album, Zayn had only released two albums as well as a few singles. In his singles, he would sing with Sia or Taylor Swift. On Nobody Is Listening, he has two featured artists, including Syd on “When Love’s Around” and Devlin on “Windowsill”.

“When Love’s Around” is a mixture of pop and techno style. Syd’s voice compliments Zayn nicely, both having a higher range. Neither of them sing together until a little over halfway through the song, which seems to be a trend in Zayn’s songs. In “I Don’t Wanna Live Forever”, a single of his that came out in 2017, Zayn and Taylor Swift do not sing together until almost two minutes in. In “When Love’s around”, they both have their separate verses until they join together in the chorus.

This album brings me a mix of emotions. I enjoyed listening to a few of the songs on the album, but some of the songs are not my style.

“Better” is my favorite on the album. It is more upbeat and fits Zayn’s voice well. This song is one that you listen to and automatically start tapping your feet to. Zayn writes about loving someone but having to leave them and how it is sometimes better that way. It shows the situation in a more positive light.

On the other hand, “When Love’s Around”, bored me a little bit. When listening to it, I found myself zoning out. The song is not one I could ever see myself listening to or turning on.

A lot of Zayn’s crowd comes from One Direction fans who follow the members’ solo careers. Zayn’s solo music is very different from One Direction, but it suits him better. Overall, Zayn is a very talented musician and deserves the recognition he is getting, and more. I recommend this album to anyone who enjoys slow pop.