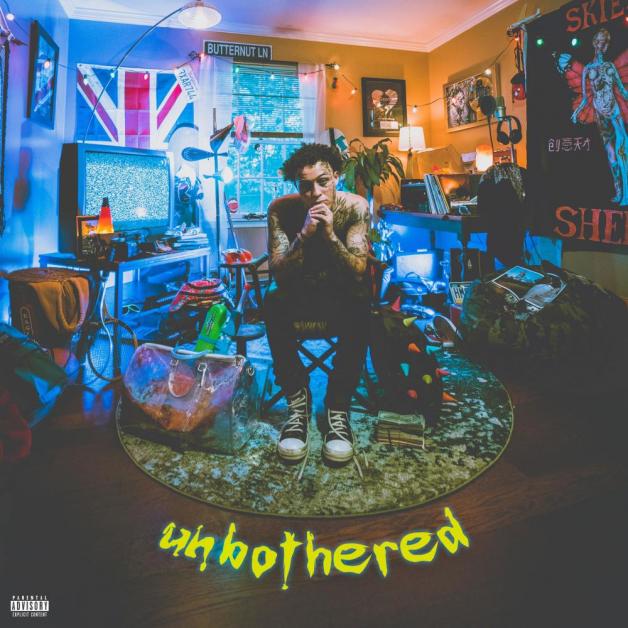 Rapper Lil Skies poses for his album cover on "Unbothered" as he is surrounded with bags and items from his childhood.

Kimetrius Christopher Foose, better known by his stage name Lil Skies, came out with his third album titled Unbothered and is impressing many listeners,  After an Instagram post on December 16, the rapper dropped his album on Friday, January 22, at 12 A.M.  The album surprised me, having multiple good songs and a couple nice features.

“I was fine having only two features on Unbothered, I prefer my collaborations to happen naturally,” Lil Skies said.

In my personal favorite “Think Deep Don’t Sink”, he displays a whole heap of talent by flowing on his beat with precision and finesse. A warning in the title reveals to look deeper but to not get lost, exposing his trust issues by saying “I know you’re an enemy” and “I know you’re no friend to me”.  He also uses repetition, singing “I know” to let listeners sing along to a catchy verse and vibe with the music.

Lil Skies talks about the feelings that come with chasing a girl that has been battered and neglected throughout the years in “Sky High.”  You get Lil Skies’ most dynamic performance on “Sky High.” Not only does he hit us with infectious melodies, but he also hits us with a powerful rap verse. The song’s icing on the cake is its hard-hitting instrumental.

In an interview with Complex, an American media and entertainment company based in New York City for youth culture, Skies tells his listeners and fans to stop running away from problems, stop repeating mistakes, and don’t force relationships.

“I just hope people take away from my album—just from me in general—is to just chase your dreams, and don’t let nobody tell you what to do,” Skies said. “I’m learning that still myself. I got a lot of people around me in my life telling me what I should do, what I shouldn’t do […] Do what you love, man. Life is too short.”

The pandemic affected each of us in different ways.  From colossal stars to complete unknowns, it up-ended our lives and demolished our expectations for the year. “Trust Nobody” hinges on fragile paranoia, while “Riot” bristles with a sense of rage, to channel his extreme emotions of the past 12 months.

I recommend this album to anyone who enjoyed his previous album, Life of a Dark Rose. Though not on the same level, Skies brings some of the same passion he did in that project.  That said, I believe Skies is still a very underrated lyricist.  Lyrically, this album is marked by pain and redemption, lingering on messages of perseverance and renewal. He may claim to be ‘unbothered’, but the marks of the pandemic are there for all to see on a brave, at times powerful, new album.  The production was great, but while he does a good job of fitting on each beat that he is handed, I feel like a more experimental rapper could’ve done more over them.  Skies didn’t make this album unique and in that way the album can not be rated any higher.  For him to take his game to the next level, he needs to step out of his comfort zone and shine like the star he has the potential to be.