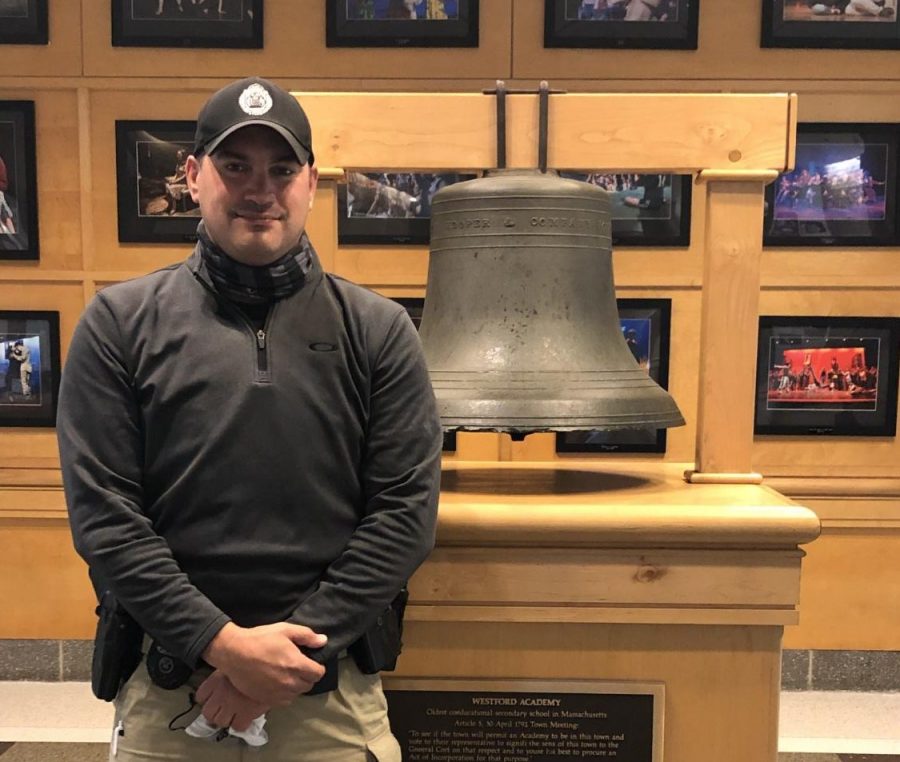 Detective Pavao stands in front of the bell in the bell lobby.

He seems to be everywhere at once, checking in on classes, strolling the halls, welcoming new students, and even attending prom. But, the instant an emergency is called, Detective Pavao is running towards the scene, no matter what he was doing. When the general public is moving away from an emergency, he is racing to it, ready to do what it takes to keep everyone safe.

In a few weeks, Detective Pavao will be promoted at the Westford Police Department and leave his long-time job here at WA. But, this decision was not quick and easy.

Pavao took the same test twice more, once in 2012 and once again in 2017, when he received the opportunity to move up in ranks. Although strenuous, Pavao had a passion for the job to back up all of the hard work required. He has always wanted to be a police officer, but he never found a route to the job. At first, he started his career in the workforce as an accountant. Then, when the opportunity to become a police officer came, he jumped at the chance.

That decision to change careers eventually brought Detective Pavao to WA. Even after he leaves the school, Pavao still hopes to stay involved in any way possible.

“I would love to always have some capacity here,” he said. “[…] I’ve made some lifelong friends here.”

Along with friends, Detective Pavao has also made cherished memories. Pavao has been the resources officer at WA for nearly six years, enjoying the pleasures of welcoming three classes as freshmen and watching them graduate as seniors. Throughout these six years, he has also left a large impact on WA as well. James Antonelli, WA’s principal, has worked with Detective Pavao for many years.

“One of the things that stands out about Detective Pavao is the relationships he’s tried to forge with students,” Antonelli said. “I think he’s very approachable.[…]He’s also been really flexible, and has the ability to invest in the community.”

Although his time at WA is coming to an end, he does have some crucial tips and advice learned from his time at WA to kickstart the new resource officer’s career.

“Spending the least amount of time in your office is going to get you the most results,” he said. “[…] You need to be out in front, and not tucked away hidden.”

Read about the next SRO here: Anthony Bernadin