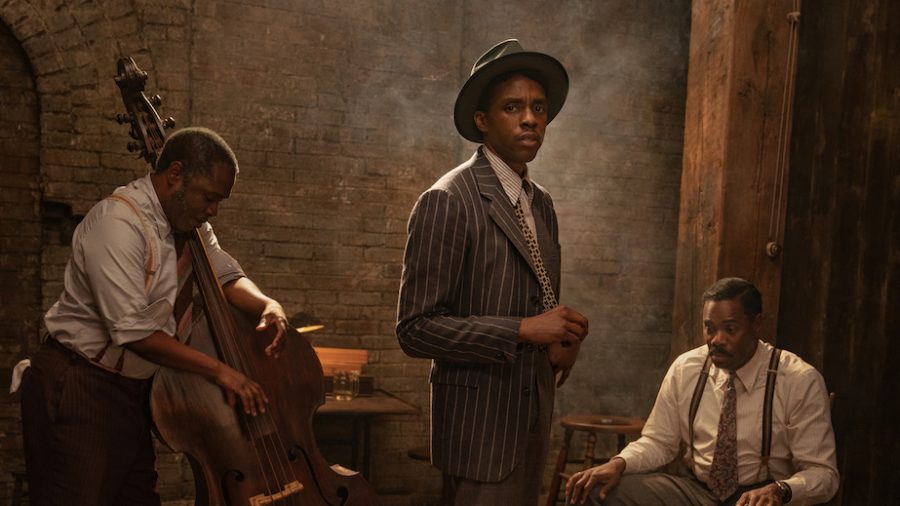 After the death of American actor Chadwick Boseman, people eagerly awaited his last movie, Ma Rainey’s Black Bottom, which truly showcased his phenomenal acting and left an impact on the movie industry as a whole. Watching the movie was heartbreaking as it just further proved that the world lost a very talented actor who was not afraid to make a statement with the roles he plays. Boseman definitely made a statement through Ma Rainey’s Black Bottom with his extraordinary acting and the message he sent through his character.

The movie begins in 1920s Chicago where two white executive men are waiting for “Mother of the Blues,” Ma Rainey, to arrive at a recording studio to record her album. As they wait for Ma Rainey, the rest of her band gathers in a congested room to practice prior to her arrival. The protagonist Levee, played by Boseman, causes tensions to run high as he shares his dreams of owning his own band one day. In doing so, he tries to overpower the authenticity of Ma Rainey by modifying her songs as they practice. The other band members, Cutler (Colman Domingo), Toledo (Glynn Turman) and Slow Drag (Michael Potts), express their disapproval of Levee due to their loyalty to Ma Rainey. After several quarrels between the members, Ma Rainey arrives late to the studio and stirs the pot even more.

The many events in the movie involve monologues of characters revealing their story as well as their perspectives on a variety of topics. Throughout the movie, the scenes reveal the struggles of black people living in the 1920s Segregation Era. Even a lot of the perspectives they share on topics such as religion showcase how their experiences in a racist world has shaped their outlook on life.

The several monologues were so touching to watch. Every single one of the actors portrayed emotion so realistically and with full depth, which completely elevated the movie. The characters had to shift from pride to sorrow to joy with ease in order to present the movie and detail the experiences of living in that time period. Boseman and Viola Davis (who played Ma Rainey) were especially outstanding in playing their roles.

In addition to the remarkable acting, the movie’s storyline gives the viewers an even deeper understanding of the effect the Segregation Era had on black people. The scenes of the movie were very detailed in conveying the effects of racism and later, led up to a heartbreaking climax that truly symbolized the heart wrenching trauma the characters face. But more importantly, the trauma black people faced in that time period.

The pacing of the movie also helped tremendously with conveying the experiences of black people in the time period. Since the entire movie covered the events of a singular day in a recording studio, the pacing was very slow. I typically don’t watch slow movies, so when I watched Ma Rainey’s Black Bottom, I caught myself wondering why a few scenes were even included as they just seemed to drag the storyline. However, the tragic climax of the movie showed the tremendous importance of what initially seemed to be insignificant scenes.

The slower pacing of the movie helped the viewer observe the complexities of every character. Typically, movies make viewers focus on the plot line of the movie; however, this movie perhaps conveyed more emotion and also a connection between the characters and the audience. Ma Rainey really makes the viewer recognize the beauty of a slow-paced, but scene and character-rich movie.

Lastly, I need to talk about the symbolism in the movie or this review wouldn’t be complete. Every single detail of the movie from the dialogue to the setting itself seemed to hold so much depth. It really made me think as the viewer about the significance of including such minor details. Everything had a meaning in the movie which is why a slow-paced movie seemed to be so rich in emotion and connection between the audience and the characters.

Overall, I highly recommend this movie. If you are someone who, like me, usually sticks to one genre of movies, I implore you to break out of the box and try watching Ma Rainey’s Black Bottom. It’s truly a fantastic movie full of rich meaning that everyone should give a try. Especially for Boseman fans, you will not be disappointed by the everlasting impact he made with this movie.