Westford Academy Girls' Basketball Captain Carly Davey submitted this "letter to the editor" to the WA Ghostwriter team on the decision to cancel hockey and basketball for the 2020 winter season. 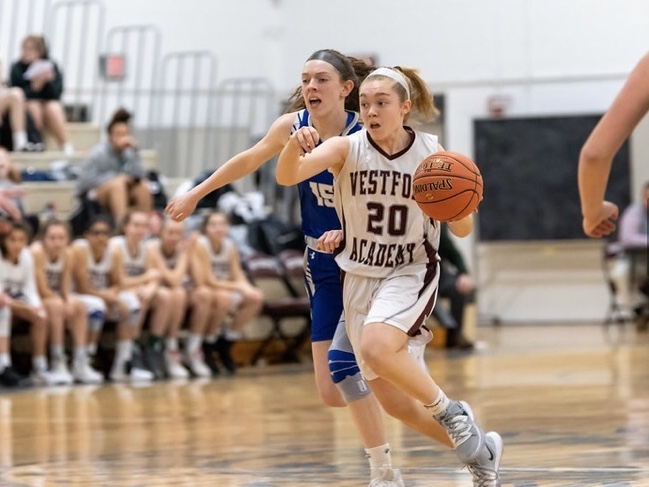 Junior Carly Davey charges down the court, controlling the ball.

My name is Carly Davey, and I am a junior captain of the Westford Academy girls’ basketball team. On December 7, the school committee voted to suspend basketball and hockey for this year. Although I understand that this decision was difficult, the process by which it came about was unfair to athletes and coaches. Only part of this story has come to light, and I feel that it is necessary for the full truth to be shared.

When the sports section of the school committee meeting began, the first person to speak was Superintendent Everett “Bill” Olsen. His recommendation to the school committee was clear cut: allow swim and dive, gymnastics, nordic ski, and alpine ski, but no basketball or hockey. The recent spike in cases as well as wanting all students back in school were the main reasons explained, however, he did not mention any data specifically about cases coming directly from basketball or hockey, or any other sports for that matter.

The next speakers to talk included four doctors on the Westford Covid Task Force, all of which supported Mr. Olsen. I was extremely disappointed in the way Dr. Michelle Travassos and Dr. Andrew Popelka talked about competing with other towns. When speaking about having a different town come to the school, Travossos mentioned “we’ll have kids from Waltham, for example, coming here.” Dr. Popelka also commented that “adding sports with outside towns, [like] Waltham, [will have] people coming in on buses.” Why is playing Waltham High, now mentioned twice, an example of why sports are dangerous and a way Covid could be spread? Westford would not have been playing Waltham this season, and many other schools are already listed on our schedule. Why were they more concerned about Waltham than Concord-Carlisle or Acton-Boxborough?

The first to speak on behalf of those for winter sports was Dr. Rebecca Rosenstein, the mother of both a past WA boys basketball player and a present one. Her goal was the same as the school committee members’: get all kids back in school. However, unlike the previous speakers, Dr. Rosenstein took a different approach: “It is my hope that if we can have a successful indoor basketball season safely […] then we will have some evidence that we can be more aggressive in having our children back in school.” I recognize that this is the objective of many in the Westford community, and I am no exception. But, what’s the plan? What are ideas to get all kids back in school? Here, Dr. Rosenstein was trying to present a suggestion that favored both sides of the argument, where having a successful basketball season could in turn provide evidence to allow more students back into school. All anyone had been asking for is a chance to try out the season, knowing that it possibly could be shut down.

The rest of the doctors who provided feedback were invited to talk multiple times throughout the meeting, however Dr. Rosenstein was not. I understand that she was not on the Covid Task Force, but was that the only reason? I would have appreciated having Dr. Rosenstein in the meeting for as much time as the other doctors, as she could have added a different perspective to the situation at hand.

Students from the various sports teams were able to speak next. Before the meeting began, Gloria Miller, the head of the school committee, limited us to two minutes each, unlike the previous guests who had not been given a specific allotted time for their voice. Although I understand that she could not let the meeting run all night, I wish that Ms. Miller divided the time more equitably among those for and against basketball and hockey. Meghan Mulhurn and Sean Milanette spoke on behalf of hockey, while Ellie Nolan and I represented basketball. We spoke passionately, and tears were shed along the way. Hannah Macey and Brian Ellis, the student representatives of the school committee were also very supportive of winter sports for all athletes. Unfortunately, Gloria Miller, the head of the school committee, only allowed these two to speak of their concerns once each, despite the other school committee and Covid Task Force members getting many chances. Why allow the student representatives on the committee in the first place if they can’t speak to represent their peers?

Next up was Principal James Antonelli, who agreed with Mr. Olsen and his recommendations. Athletic director Jeff Bunyon also spoke, but offered a different opinion than his colleagues. Although Mr. Bunyon addressed the concerns for basketball and hockey, he made sure to mention how the MIAA’s new rules are designed for safety and regulation, including mandatory mask wearing, no locker rooms, and breaks for sanitization. He also noted that neighboring DCL schools plan to try and allow the kids to play this winter, and we never were able to get a clear understanding of how Westford differed from these other towns in any substantial way in terms of Covid risk from sports.

As the vote neared, committee members Sean Kelly, Mingquan Zheng, and Chris Sanders offered questions and comments regarding possible creative ideas in order to get basketball and hockey off the ground. One of these being a contract, in which athletes sign to not break Covid safety rules, like attending parties and eating unmasked with friends at restaurants. However, Ms. Miller dismissed these ideas pretty quickly as they were too “difficult to enforce,” and Mr. Antonelli agreed, despite all of the athletes saying previously that they would do whatever it took to have a season. These ideas along with the commitment of students should have been taken into more consideration by decision makers.

Despite the over 1,000 petition signatures, 37 pages of personal statements, multiple student and parent speakers, and over 30 school districts continuing on with all winter sports, four Westford school committee members decided that basketball and hockey would not be allowed to try for the upcoming winter sports season. Read those numbers again.

However, it is what has come after the school committee meeting that makes me the most upset. I have felt certain emotions these past two weeks that I never felt in my life.

A simple fact: actions speak louder than words. Ms. Miller commented at the meeting that she is “concerned about the mental health and wellness of all of our students,” yet to date, there have not been any resources offered to basketball and hockey student athletes whose season the school committee just voted to take away.

All of the administrators and members of the different committees expressed how bad they felt for having to cancel the season for basketball and hockey student athletes, but in the days that followed, none followed up with us in any way. I have received more emails and text messages from parents whom I have never met than from administrators whose school system I have been in for the last 12 years. In fact, no administrators or committee members reached out to any of the basketball or hockey speakers. There were four of us who spoke on behalf of a winter sport that was cancelled, and not one of us received an email or in-person follow up. That is inexcusable.

I wish the Westford Academy’s swim and dive, gymnastics, nordic ski, and alpine ski teams the best of luck during their seasons this year, as well as the rest of the hockey and basketball teams across Massachusetts. Please remember to cherish every second, as you never know when your passion could be taken away at any moment.

9 Responses to “Letter to the editor: basketball captain shares views on sports cancellations”