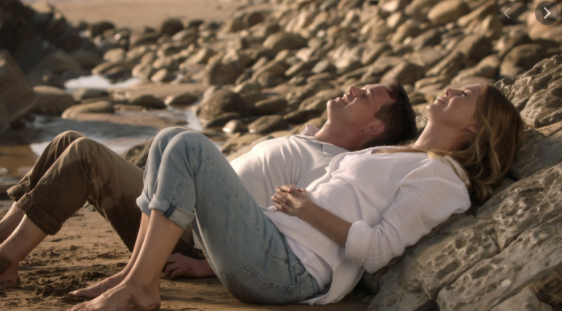 George and Meredith look to the sky while discussing past memories.

On December 3, the fourth episode, “You’ll Never Walk Alone”, of Grey’s Anatomy season 17 aired. This was a highly anticipated episode that viewers had to wait two weeks for, but this it did not disappoint.

First, we see the doctors outside discussing patients due to the COVID-19 circumstances. Koracick, quarantining at his house, joins through a video call. They are all wanting to discuss Meredith and her current condition with COVID.

Then, we see Meredith, who’s not getting any better. Deluca and Altman are in charge of her case, and Altman has come up with an idea to start her on an antibody clinical trial. This trial has yet to be successful, and three patients have died from it. Richard, her healthcare proxy, is not sure if the trial is the safest option.

Meanwhile at home, Amelia and Link are stressed out having to deal with four kids at home. Amelia is constantly thinking about what will happen if Meredith dies and she gets custody of her kids. Then we move to the beach and see the scene everyone has been holding their breaths for, for weeks. Originally, I thought it would be Lexie Grey, but I was pleasantly surprised when I saw George O’Malley, one of Meredith’s fellow interns from season one.

Then we see resident Taryn Helm at Koracick’s house giving him a Covid test. She does this because he is convinced that he had a false positive. When you look inside his house he has computer screens up. When asked what he is doing he says he is stopping the pandemic.

Next, Winston invites Maggie to a birthday dinner being held virtually with his family. Maggie is hesitant to go because she cannot stop thinking about Meredith and how to help her. When Winston suggests taking a breather at his family dinner Maggie agrees to go.

The patient who fell off the ladder outside his house that was admitted to Grey-Sloan Memorial and Hunt diagnosed him with an appendectomy he actually had diverticulosis. Hunt and the patient are headed for surgery. This later brings up concerns from a resident whether Hunt ignored the fact that his patient was of Asian descent, and was ten times more at risk for diverticulosis.

Meanwhile on the beach, George says that nothing is real at the beach and that Meredith has great kids who she shouldn’t leave. They laugh like old friends, which was great to see because I really miss M.A.G.I.C. (the original class of residents including Meredith, Alex, George, Izzie and Cristina). Alex was the last to depart, leaving midway through season 16. Then, Meredith asks if she gets to decide to go to the afterlife; George says he didn’t have an option and would have stayed if he could have.

Richard tries asking Meredith for her opinion on the trial, because he is concerned that he doesn’t know any pros or cons with this treatment. It seems as if this might be her only option though, so I think he has to at least take a chance with it or else she probably won’t get better.

Back at Winston’s virtual dinner, everything is going well before they are interrupted by his father, who constantly finds fault with him. You can clearly see the issues run deep when Winston abruptly leaves the call and leaves Maggie awkwardly alone with his family.

Jo fell asleep at Jackson’s and he says she is welcome to the coach at any time. He also mentions that it was the best friendship reboot. I feel like they are the only ones left working at the hospital right now, and it’s really sad that everyone else is gone. I miss a lot of the older cast members, especially Alex, Callie, Arizona and April. The show feels a little empty without them.

Later on at the beach, George and Meredith continue to talk about how devastated she was at the funeral, and how Izzie, Cristina, Meredith, and Alex were cracking up. Then it turn somber and Meredith admits that she always moves on from deaths. So many people in her life have died or moved on and she just continues to get up and go about her work life. It really is sad to see such a young character go through so much tragedy, including her husband, sister and mother dying. George tells her that all people cope in different ways, and that his mom has still not gotten over her husband and her son dying.

Soon after we see Koracick at his house, and this time he is no longer in the mood to talk about fixing the pandemic. He instead gives up and tells Helm to go away because the pandemic will destroy the world by the end of the year. This was such a mood switch from earlier in the episode which lead me to believe that he is starting to feel lousy, because Tom is usually arrogant and overconfident in his abilities.

Jackson and Jo then contemplate whether they should become a thing, but later decide to just remain friends. I personally am grateful for this situation because putting them together is like just matching up the only two single people and saying deal with it. They fit as friends well, but that is it.

Later, Helm tells Altman that Koracick is in a really dark place and needs help. She seems to be the only one that is can talk to him in situations like this.

The resident from the appendectomy confronts Hunt, but not fully before she is dismissed by Nico. Then Nico tells Hunt that Hunt had screwed up and should have known that it is ten times more likely from patients with Asian descent to have diverticulosis. Hunt definitely made a mistake with this one and even though he was stressed he should have slowed down and really taken a good look at the patient as well as his medical history.

Amelia talks to Link and freaks out on him because he seems to be dismissing her fear and grief.  She says that Link will have a tough time finding a bright side to the consequence of Meredith situation if she doesn’t get better. Link then makes a space for them to sit while she expresses her feelings,which is so sweet and makes me like them together even more.

At the hospital, we see Meredith shaking and she goes back to talking to George on the beach. He misses dancing, laughing, food, and the simple things in life. I’m hoping that George saying this to Meredith it will make her fight harder to live while she still has the option. This also leads Richard to sign the consent forms for the clinical trial.

Hunt then asks Bailey what her opinion would be if she had an Asian American in the ER if she would get the CT. Bailey said he is just thinking about white patients and Hunt genuinely feels bad. Bailey then teaches him about equity, and how each patient doesn’t need to be equal, but everyone needs to get exactly what they need personally to thrive. This was a very nice thing to see in Grey’s because it really addressed another social issue in the world presently. Bailey also mentions how everyone has biases, but people should recognize their biases and actively try and work to fix them in protocols to make things better.

Maggie gets a call from Winston. He says that his dad makes him crazy because he seems like he is all charm, but has a temper that contradicts this. Then, Altman ends up at Koracick’s house and when he doesn’t open the door she leaves. Little does she know that he is currently inside the door on the floor shaking from illness. We are left with the quote: “find your people keep them close and when you are at your lowest those people will get you through.”

I really enjoyed this episode. It faced social issues like racial inequalities in the healthcare system, and past life problems such as how Link’s battle with cancer shaped his perspective on life changing events like pandemics. Also, I enjoyed that we were able to see an older, more wise version of George.

Meredith will start to improve but then later get worse, this has happens in COVID cases in real life.

I think Tom will also have a tough run with COVID due to him being older.

I also think we will have a newcomer on the beach, I know I said this last week, but I’m still hoping Lexie will show up.