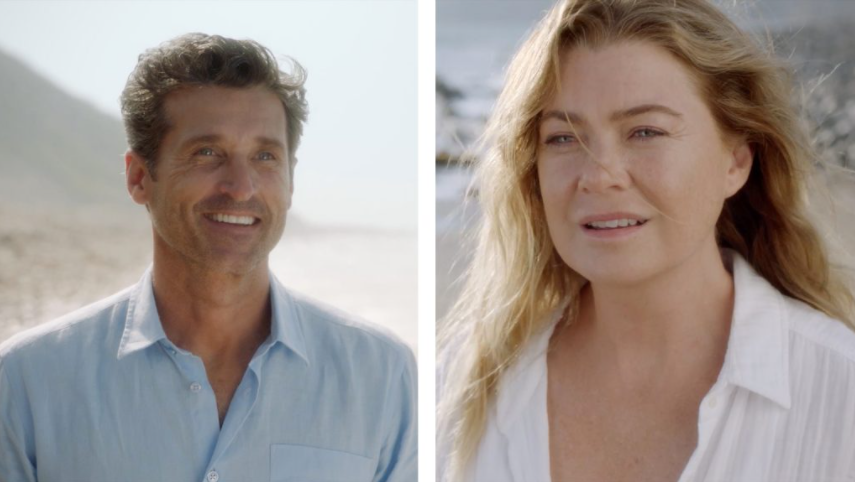 Derek Shepherd and Meredith gaze at each other from across the beach.

The second episode to season 17 of Grey’s Anatomy aired on November 12, the same day as the first episode, making it a two hour premiere as well as a direct continuation to the first episode.

To start the second episode of season 17, we see Jackson and Meredith outside the hospital exhausted from working all day. Meredith asks him if he has been in an operation room he says “yes.” She gets jealous, because she hasn’t cut anybody open in over two weeks! Surgery is what she wants and what she has been looking for for months; there are no more patients dying of COVID. No more codes! Then she sees pediatric surgeon Cormac Hayes outside sleeping, and they talk about how Hayes doesn’t even have a proper mask.

Soon we see the owner of Grey-Sloan Catherine Fox as she calls out for Maggie and doesn’t even acknowledge Richard showing that their relationship is still on the rocks. Even making wise comments to one another as they walk away.

Now finally we pan to Meredith’s backyard and see Amelia and Link. They are staying home taking care of their still unknown named baby along with Meredith’s three children. Obviously outnumbered, Amelia comes to the realization that she had missed Link’s birthday. The show proceeds to pans to flashbacks to the past where we learn that they decided against Scout for their son’s first name.

Owen asked to talk to Teddy and you can obviously tell that she doesn’t think that Owen knows. In a flashback we learn that Teddy has zero remorse for her actions and will not tell Owen the truth. This makes me dislike Teddy a lot! She was never my favorite character, but the way she went on like nothing happened made me lose a lot of respect for her. Owen wasn’t this cruel when he cheated on Christina, because he thought it was justified because he hated her.

Katherine is then shown getting frustrated with Maggie about finances. They then have a good yelling session about all their frustrations with the world and the frustrations of not being able to fix every problem. I love this scene that shows all the frustration being let go. Then when they finish yelling we see Katherine sitting down and tears rolling down her face saying how much she misses Richard. This is one of the only times we have seen an emotional Katherine even through all the things she has dealt with like cancer. This just solidifies to us how much she loves Richard.

Next appears a flashback of Richard seeing his presentation from the conference. He is obviously disappointed and believes that this will ruin his career. He also tell Jackson about how he felt like he had been cheating on his mother with another women. Although he didn’t say that it was anything more than an emotional connection you can tell he is remorseful. With both Richard and Katherine still wanting to be together I see a reunion coming together. This makes me so happy because after Adele died Richard hadn’t had a lot of great things happen in his personal life until he got together with Katherine. This relationship needs to be saved.

The boys from the OR are in bad shape and need surgery. Meredith and Hayes enter the OR with Frankie and Jackson. Teddy and Maggie enter another OR with Kaden. If you wanted anybody to save you this would be the squad. It also gives Meredith a needed vacation away from her COVID patients.

In a flashback we than see Jackson giving wise words to Richard about Katherine. He tells Richard that he needs to fight for her, because when she loves you she will move mountains to do this. This is so sweet coming from Jackson, fighting for his mom’s happiness.

Owen asks Teddy one more time to be honest with him, but Teddy just leaves her night with Koracick hidden. Then Owen plays the voicemail he received from Teddy and she is mortified. This scene makes me feel so bad for Owen a character that has not been my favorite in times past. When Teddy gets upset over it I didn’t even feel bad. She deserved it, because they had been best friends before this and she ruined not only their family but their friendship.

We than see opinions from both Frankie’s and Kaden’s dad. Frankie’s dad wa mortified that he had been out for a party after all his past health risks and how in the past doctors have saved his life. Then we see a different perspective from Kaden’s dad who said that he actually let Kaden take the car, but always thought it was a bad idea. Both two very valid opinions from parents in a situation like this.

Fortunately, we find out that Grey and Hayes were able to save Frankie’s life. Jackson Teddy and Maggie were not as fortunate with Kaden he had died in surgery. Even though both fathers earlier in the day were in a fist fight when they hear this news Frankie’s dad is able to put his differences aside to go and console Kaden’s dad.

Than Maggie storms into the conference room to give Katherine a speech that mirrors Jackson’s speech to Richard. Even though they have had their differences in the past they need to be together to make eachother happy. I love that they put in speeches from Maggie and Jackson it shows that the entire world needs them together in this time.

More bad Teddy alert! While Teddy is in the conference room crying about her Owen situation Jo walks in and tells her that she put herself in this situation and it is nobody’s fault but her own. Teddy then proceeds to go low saying that it is not her fault that Alex left her. I will not stand with Teddy going that low to Jo who has been through so much lately.

Finally the make up we have been waiting months for. Katherine like a boss fires Koracick and makes Richard the chief of chiefs. Then proceeds to apologize for all her past sins. Richard gladly accepts and can’t wait to be reunited with her outside the hospital.

Niko and Levi seem to make up quite easily. And Maggie gets such a cute delivery from Winston. A perfect bedroom like a tent in the backyard so she can see her family as well as keep them safe. They are so perfect for each other, and I can’t wait until they can be together in person.

Amelia then gives Link some late birthday donuts before they reveal their son’s name to be Scout Derek Shepherd Lincoln. A perfect tribute to her late brother while still making him Link’s little sidekick because of “The to Kill a Mockingbird allusion.

Teddy then tries to apologize to Owen, and Owen asks why she hates him when she responds with to the situation as a mistake. He doesn’t want to be just Owen, the situation Teddy just got stuck with. So, Owen just hops in his truck and drives off.

Then, we see Meredith sprawled on the ground passed out. We are sent to the beach. She is on death’s doors and hears a voice. It’s Derek’s. The thing we have all been waiting for when McDreamy makes a reappearance. I could not have imagined this to happen but I am so excited it did. All I can hope for is that this was not a one time deal.

I thought this was a fantastic conclusion to the first two episodes and rate it 10/10.

I think Meredith will have COVID. I think the beach will be a reoccurring scene and she will be met with numerous people from her past like Lexie and Eilis. I believe that Richard and Katherine will be back on track. And I hope that Owen can find happiness without Teddy. Besides that I have no real predictions for this season. I am excited to continue this series next week.