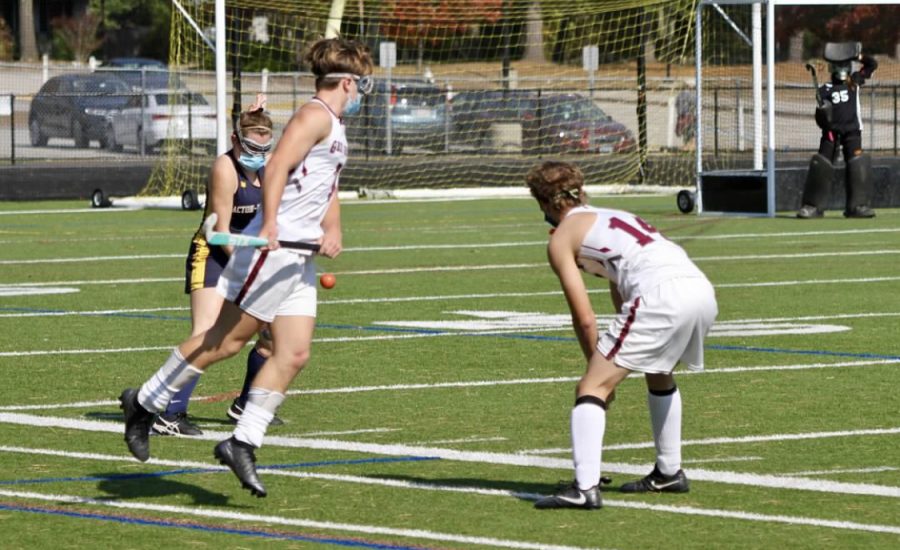 Ryan Walsh and Owen deMars on the field.

In previous years looking across Trustees Field, the field hockey team would be comprised of girls and only girls, but this year looks a little different. The cancellation of other male-dominated sports like football due to the pandemic gave opportunities for many boys to play a new sport. This brought five newcomers to the field.

Across the globe, field hockey is a male-dominated sport, but in the U.S. there are not very many opportunities for boys to play, and in Massachusetts there are no high school boys’ field hockey teams. Similarly to girls who can play on the boys team in other sports such as football and wrestling, the boys are left with the option to play on the “girls” team. And even though there are no rules against boys playing on the team, they still face a lot of backlash from the other teams, and other parents. This didn’t stop senior Ryan Walsh, and juniors Owen deMars, Jack Gould, Tadgh Murray and Michael Witkum from playing this fall.

deMars, along with Walsh had never picked up a field hockey stick before the summer the two of them play for the varsity team at Westford Academy. Gould, Murray, and Witkum compete for the JVA team.

Going into the season the boys were not sure what to expect from a girls team, but many of them coming from a background in football and wrestling, were pleasantly surprised how fun and peppy the team is, but does not lack the competitiveness of the teams they have played for in the past have had.

“Coming into field hockey, I thought it was going to be easy and not a serious sport. Little did I know how technical and skilled it is. There is lots of running and you definitely have to work for playing time,” deMars said.

Although things started off a little awkward for everyone, it was only a matter of time before they were no different from the other players. They brought positive attitudes and were always willing to be apart of team spirit days and captains practices. Their teammates appreciated the new additions to their team.

“Wubbie (Walsh) and Owen fit in with the team really well. They learned the game really fast and are amazing players on the field. This season has been super fun playing with them and I’m really glad they decided to play,” varsity player Erin Blatt said.

Even though the boys have received an overwhelming amount of support from their WA friends and teammates, they don’t have to go far to face criticism. They have been able to keep a cool head and focus on what’s important, playing hard.

“Girls sometimes push me, trip me (it doesn’t do much, it’s just annoying) and get to like giggle and walk away. A girl yelled at me ‘you’re not even supposed to be playing’. I’ve heard opposing teams’ parents be upset that we are on the team. But it’s honestly not that big of a deal, someone’s always going to be upset about something,” Walsh said.

Beginning the season deMars and Walsh were newbies, behind not only in some skill, but also in knowledge and experience. They did not let this bring them down. They came to practice every day knowing that there were many more things for them to learn and they were prepared to do so. With the help of their teammates and coaches, they were able to develop their skills and become players that could be relied on during big plays in the game.

The positive attitudes from the newcomers of the team helped solidify them as great players and teammates. Their immense amount of intensity and desire to show other people that this was serious for them helped grow the team’s bond.

Even though the boys are fitting in well now this was not always the case. Many players citing early skepticism about the boys trying out.

“I was very skeptical about guys trying out because I was worried that they were not going to take it seriously, but as tryouts went on you could tell they were working really hard and genuinely wanted to play,” senior captain Alana Donovan said.

Even with so much criticism from parents, coaches and other teams, the boys were still able to joke around with opponents. They even having one team make a meme about Walsh for their team. And make memories that will last a lifetime.

For Walsh, this was his last opportunity for fall sports considering he is a senior, and something that he wishes he committed to earlier in high school. He will be joining the Americorps next year.

As for deMars he has a tough decision to make for himself next year. He is not sure whether he will stick to his new passion or go back to football the sport he has played for years.

Although these players may not be playing next year, they opened the door for younger boys to take up a sport mostly stereotyped as a girls sport.

“I would say go for it! It’s a super fun sport, but be prepared to learn a lot because it is not as easy as it seems,” Donovan said.