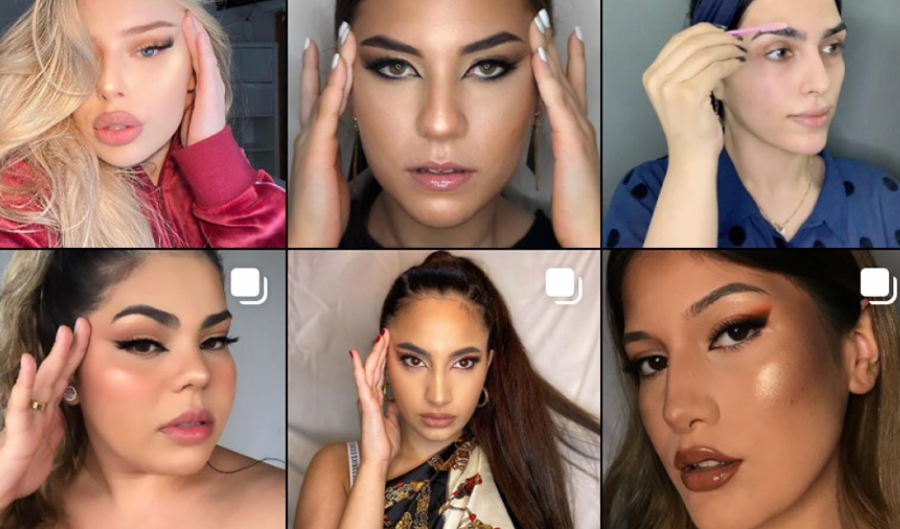 Collage of some top posts from this summer's fox-eye trend showing girls pulling back their eyes in an "almond shape".

“Look at me, ching-chong!” my elementary classmates used to say to me while pulling back the corner of their eyes in an attempt to mock me. My frustration and anger never met my peers as I buried it within me. I went home and cried that day ashamed of my appearance — ashamed of who I was.

At such a young age, I didn’t even know what racism was. All I knew was that I was embarrassed the day I was mocked. I was insecure about myself for not having large, colorful eyes that popped out like the rest of my Caucasian classmates. I was insecure. I was jealous of the fact that I couldn’t make fun of them because they were the definition of beautiful: White, tall, slim, and had eyes that were still visible when they smiled.

I am now fifteen, old enough to be educated about my race and culture, as well as to love and accept who I am.

However, scrolling through social media in the past few months, I landed on posts participating in a trend now called “fox eyes”. What was considered a fun and glamorous trend disturbed me.

The gesture used in the “fox eye” trend is commonly recognized as a symbol of xenophobia. The stereotype has been used to attack and normalize hate and racism towards the Asian community.

On TikTok, Instagram, and Youtube, people from all over the world have been posting pictures of themselves posing while pulling their eyes back. Makeup tutorials were also created to demonstrate how to transform one’s eyes into a look they call “almond-shaped eyes ”. The media followed in the footsteps of some famous celebrities who have participated in this trend like Gigi Hadid, Bella Hadid, and Kendall Jenner.

Though many of these photos were posted years ago, they are just now being called out for it. I thought to myself, “This is ridiculous! People admired this? What about this do people not find racist?”.

These posts and videos triggered the flashbacks of when I was told my eyes were “not normal” or when I was told I was not beautiful because I never met the “American beauty standards”.

Until now, I never actually realized how offensive it is when celebrities undergo plastic surgery in which they come out with an eye/brow lift, making their eyes “almond-shaped”.

While white people continued to participate in the fox-eye trend, they are also continuously praised for it. At times, it makes me question myself, “If this is what’s considered ‘beautiful’, how come I’m not?”.

When I was younger, I never really questioned those who’d imitate me when I spoke to my parents on the phone in Khmer when they thought it was Mandarin. They’d mock me by saying, “Ching chong” or “ling ling”, and I just accepted it.

Me not knowing in the past what was or wasn’t racist about these topics just proves how normalized racism has become towards the Asian community. I have been immune to all these racist jokes and comments people have called me throughout my life that it just seemed so normal to me.

Racism should not be accepted by anyone in any way. Society has told us to stay silent. However, given the fact that racism has been normalized towards Asians for decades now, I’ve realized that some of my Asian friends and family have just given up on confronting those who are truly racist.

At the beginning of the pandemic, racism towards East-Asians was at an all-time high. People assumed light-skinned Asians (myself included), were Chinese and were the cause of the pandemic. I was continuously being told that COVID-19 was my fault and that I should “go back to my country” or “eat dogs and bats somewhere else”.

As the fox eye trend seems to be dying down, I am so proud of those in the Asian community for calling out people’s wrongful actions. Rather than ignoring the fact that someone has done something racist, people began to educate others. I myself have also learned to stand up for not only myself, but for many other Asians who are scared to voice out their thoughts and their opinions like I once was.

People should continue to spread awareness of this situation, encourage people to call others out on their mistakes, and forgive those who have taken accountability for their actions and formally apologized for their wrongfulness; because nothing about racism is okay. Just because racism towards Asians is normalized in society, doesn’t mean it should be.

Part one of many. More articles to come about racism against Asian Americans, stay tuned!

Is Beauty in the Eyes of the Colonizer? | NPR

The long history of racism against Asian Americans in the U.S. | PBS