Woman of the Month: Rosalind Franklin, Mother of the Helix 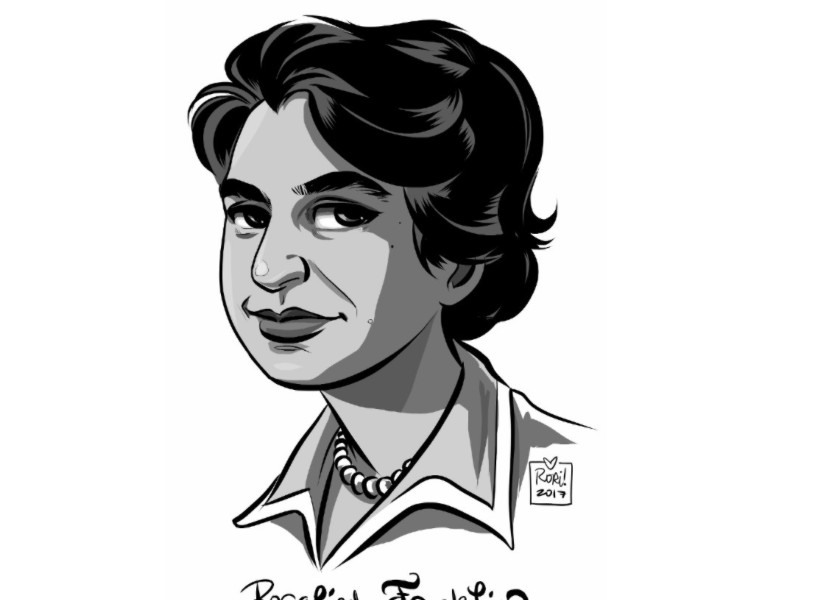 Rosalind Franklin dedicated her life to science, and was instrumental in the discovery of DNA's helical structure. But, she was repaid by having her influence erased and her work attributed to James Watson and Francis Crick.

In 1967 Francis Crick, Maurice Wilkins, and James Watson were awarded the Nobel Prize for Physiology or Medicine. Many believe, if not for her death from ovarian cancer in 1963, Rosalind Franklin would have shared in that honor.

Rosalind Franklin was born in July 1920 to Muriel and Elis Franklin, a Jewish couple from Notting Hill, London. Rosalind’s parents encouraged individuality, but rampant gender discrimination held her back. (Kauffman 123).

Displaying promise in the field of science, Franklin enrolled at St. Paul’s Girls’ School in West London as a foundation scholar. The independent school provided young girls with the opportunity to study chemistry and physics.

In 1938, Franklin won a scholarship to Cambridge University’s women’s college, Newnham College. At Newnham, she studied chemistry in the Natural Sciences Tripos program which encouraged thinking in mathematics and science.

Upon graduating with second-class honors (the women’s equivalent of a bachelor’s degree) in 1941, Franklin received a fellowship at Newnham under Ronald Norrish, a Nobel Prize-winning chemist. She spent a year working with Norrish, studying gas-phase chromatography. In 1942, Franklin joined the British Coal Utilisation Research Association (BCURA) as an assistant researcher to fulfill her service requirement under the wartime National Service Act. At BCURA, she studied how the microscopic pores in the structure of coal react to temperature changes. In 1945, Franklin was awarded a Ph.D. for this research.

In 1947, Marcel Mathieu, director of the Centre National de la Recherche Scientifique (The French National Center for Scientific Research), offered Franklin a job working with Jacques Mering, a well-known expert in X-ray crystallography. As a result of her work with Mering, Franklin became known as a specialist in the field.

In 1951, John Randall, a respected physicist, recruited Franklin to bolster the British field of x-ray crystallography. When Franklin joined the team studying the structure of DNA at King’s College, she took the job of researcher Maurice Wilkins. Insulted by the demotion and Franklin’s refusal to collaborate, Wilkins went behind Franklin’s back and shared the research her team had been conducting with James Watson and Francis Crick, researchers from a competing laboratory. Soon after, Crick and Watson submitted a paper revealing the discovery of the helical structure of DNA to Nature, a scientific journal. Despite Franklin’s findings also being published in the April edition of Nature, Watson and Crick’s description of their own research as “‘having been stimulated by a general knowledge of Franklin and Wilkins’ ‘unpublished’ contribution’” (Wexler 58) effectively erased the magnitude of Franklin’s contribution to the revelation of the double-helix.

In 1968, Watson published a best-selling book The Double-Helix. Using the nickname ‘Rosy’, a nickname Franklin had often asked people never to use, he portrayed her as anti-helical and as the main obstacle in Crick and Watson’s quest for a double-helix interpretation of DNA. Further distorting Franklin’s efforts and character, Watson depicted her as “‘the product of an unsatisfied mother who unduly stressed the desirability of professional careers that could save bright girls from marriages to dull men’” (Wexler 58).

But, Watson and Crick came to regret their treatment of Franklin. In the epilogue of his book, Watson admitted he underestimated Franklin and expressed his and Crick’s admiration for her in the end.

“We both came to appreciate greatly her personal honesty and generosity, realizing years too late the struggles that the intelligent woman faces to be accepted by a scientific world which often regards women as mere diversions from serious thinking. Rosalind’s exemplary courage and integrity were apparent to all” – Watson

In the foreword of Robert Olby’s The Path to the Double-Helix, Crick acknowledged Franklin’s efforts: “After all, the structure was there waiting to be discovered–Watson and I did not invent it. It seems to me unlikely that either of us would have done it separately, but Rosalind Franklin was getting pretty close. She was in fact only two steps away. She needed to realize that the two chains were anti-parallel and to discover the base-pairing.” Franklin’s efforts were further recognized through her notebooks which proved she was close to uncovering the helical structure of DNA. A friend and biographer, Anne Sayre, suggested that the negative perception of women researchers at that time might have limited Franklin’s progress on DNA (“Franklin, Rosalind Elsie (1920-1958).” ).

Franklin is among the thousands of women whose work had gone without recognition. All too often, the influence of women is lost in history. Franklin’s photograph was the key to the secret behind the “building blocks” of life. It is unbelievably frustrating that everyone except for the person who provided that key was awarded for their work and will be remembered by history. People say behind every great man is a great woman, but Franklin was never behind anyone, she was leading. That men like Watson, Crick, and Wilkins effaced her work, is a true injustice. Not only did Watson steal her work, but he attempted to discredit her by using the age-old idea that women are delicate creatures who are unable to carry out simple tasks to label her a hysterical woman.

As more and more people learn about Franklin, I hope that we might mend the wrongs committed against her. But at the very least, I hope we can learn from this ultimate example of gender discrimination. While it is difficult to truly speak to the motives of the men who hindered Franklin in life, it is obvious she was a victim of gender discrimination. Watson and Crick might have spoken well of her in the end and Wilkins might have acknowledged her influence posthumously, but Watson’s glaring prejudice toward her at the beginning of their acquaintance, a prejudice that seems to have justified appropriating her work, and the sexism that led Wilkins to divulge her work, without permission, nearly destroyed Franklin’s legacy. Even today, her true influence is not recognized: the extent of her impact is debated, as is whether she would have received the Nobel Prize.